One of the most influential figures in the Harlem Renaissance, Festus Claudius McKay was a Jamaican-American novelist and poet. Better known as Claude McKay, he was the author of several award winning literary works including the highly acclaimed novel, ‘Home to Harlem’. He was a versatile writer whose work ranged from verses describing the rustic Jamaican life to more serious philosophical works. Life was not easy for the young black man in the early 20th century America and he was witness to rampant acts of racism. He expressed his anger at white authorities through his writings and even took to composing militant style poems. The struggles and triumphs of black people living in racist America was a recurring motif in his writings. His love for literature was apparent from a young age - he was an avid reader of works of philosophy, religion, and science. He was not even ten when he started composing poems of his own. A turning point in his life was his meeting with Walter Jekyll who became his mentor and encouraged him to write. The Jamaican born McKay moved to the U.S. where he was shocked by prevalence of racism. Racism, black life and emancipation of blacks were common concepts he explored in many of his writings. Colette
Poets #258
Novelists #556
Short Story Writers #123
Continue Reading Below
DID WE MISS SOMEONE?
CLICK HERE AND TELL US
WE'LL MAKE SURE
THEY'RE HERE A.S.A.P
Quick Facts

American Celebrities
Jamaican Celebrities
Black Poets
Novelists
Black Writers
Black Novelists
Childhood & Early Life
He was the youngest of the 11 children born to Thomas Francis McKay and Hannah Ann Elizabeth. His parents were farmers.
His oldest brother was a teacher and the young Claude was sent to live with him when he was seven. He loved to read books and devoured literature, philosophy, religion and science.
He met a mentor in Walter Jekyll in 1907 who encouraged the boy to write and develop his own literary style. He blossomed under his guide and began writing verses in Jamaican dialect. With Jekyll’s help he published his first book of poems, ‘Songs of Jamaica’ in 1912.
He moved to the U.S. in 1912 to attend Booker T. Washington’s Tuskegee Institute. There he encountered wide spread racism which motivated him to write more poetry. He did not like the place and shifted to Kansas State University. 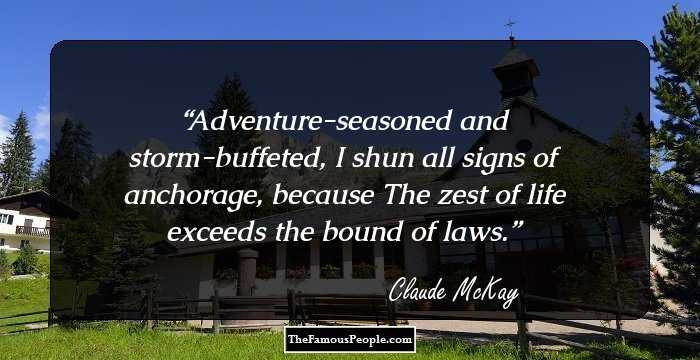 The Best Black Actresses Of All Time
Career
He published two poems in 1917 under the pseudonym Eli Edwards. He became acquainted with Crystal and Max Eastman who published the socialist magazine ‘The Liberator’ in 1919.
He became a co-executive editor of ‘The Liberator’ and served in this post till 1922. America was plagued by rampant racial violence during the period which influenced him to produce the poem ‘If We Must Die’.
Angry with white authorities, he joined a group of black radicals who formed the semi-secret revolutionary organization, ‘African Blood Brotherhood’.
He went to London in 1919 where he became a member of the International Socialist Club. He also became inclined towards militancy and joined the Rationalist Press Association.
He was employed as a journalist by the socialist paper ‘Workers’ Dreadnought’. He was drawn towards communism and attended the Communist Unity Conference that established the Communist Party of Great Britain. He continued writing poetry throughout.
He visited the Soviet Union from November 1922 to June 1923 and met many leading Bolsheviks. His Russian experiences were published in the essay ‘Soviet Russia and the Negro’ in December 1923.
In 1928, he published his first novel, ‘Home to Harlem’ which tells the story of a black soldier who abandons his military duties to return home. The novel gave an honest and detailed description of urban black life marked by prostitution and gambling.
The very next year he brought out the novel ‘Banjo: A Story without a Plot’. It was about the adventures of an African-American in Marseilles, France. But this book could not match the success of its predecessor.
He released and a collection of short stories titled ‘Gingertown’ in 1932 and a novel ‘Banana Bottom’ in 1933. These books were not much successful at the time of their publication but gained significance later on.
His autobiography, ‘A Long Way from Home’ was published in 1937. He described the problems he had faced as a black man in a white society. However, this book is considered unreliable as many facts from his life are missing.
During the 1930s and 1940s he wrote essays and articles for ‘The Nation’, ‘New Leader’, and the ‘New York Amsterdam News’. He wrote a non-fiction book, ‘Harlem: Negro Metropolis’ in 1940.
Major Works
His debut novel, ‘Home to Harlem’ was his most famous work. It tells the story of a black soldier who leaves the U.S. Army in the midst of the World War I to return home to Harlem. His story is juxtaposed with that of Ray, a disillusioned Haitian immigrant.
Awards & Achievements
The Jamaican Institute of Arts and Sciences honoured him with the Musgrave Medal in 1912 for his volumes of poetry, ‘Songs of Jamaica’ and ‘Constab Ballads’.
He was the recipient of the prestigious Harmon Foundation Award for distinguished literary achievement in 1929 for his works ‘Harlem Shadows’ and ‘Home to Harlem’.
Personal Life & legacy
He married his childhood sweetheart Eulalie Lewars in 1914. They had one daughter.
He died of a heart attack in 1948.
Recommended Lists:
Writers #1823
You May Like

See the events in life of Claude McKay in Chronological Order