(3rd President of the United States)

Thomas Jefferson was a major political leader and the third president of the United States, serving from 1801 to 1809. He was also a co-founder and leader of the ‘Democratic Republic Party.’ From 1779 to 1781, he served as the wartime governor of Virginia. He also wrote ‘Virginia Statute for Religious Freedom,’ a statute which was enacted by the ‘Virginia General Assembly’ into the state's law in 1786. Before he was elected to the presidency, he was appointed as the first United States secretary of state during 1789-1793 and was the second vice-president of America, serving from 1797 to 1801. In 1776, he became the main author of the ‘Declaration of Independence,’ and received appreciation for his role in promoting republicanism in the United States. While in power, Jefferson fiercely supported the idea of democracy and favored states’ rights, which he considered virtues of republicanism. A man of many talents, Thomas Jefferson explored many interests and found success as a horticulturist, statesman, architect, archaeologist, inventor, and founder of the ‘University of Virginia.’ Joe Biden
13th April In History
DID WE MISS SOMEONE?
CLICK HERE AND TELL US
WE'LL MAKE SURE
THEY'RE HERE A.S.A.P
Quick Facts

American People
Diplomats
Presidents
Political Leaders
American Men
Childhood & Education
Born on 13 April 1743 in Virginia, Thomas Jefferson was the third of ten children born to Peter Jefferson and Jane Randolph. His father, who was of Welsh descent, was a surveyor and worked as a planter. In 1745, his family moved to Tuckahoe and lived there for seven years before returning to their home in Albemarle County after his father was appointed to the colonelcy of the county. Jefferson’s education began in 1752 at a school run by William Douglas, who was a Scottish minister. From the time he was nine, Jefferson became an avid learner of Greek, French, and Latin. His father died in 1757, making Thomas Jefferson the heir to his assets and a number of slaves.
From 1758 to 1760, Jefferson was taught by Reverend James Maury in Virginia where he received classical education and studied science and history. In 1760, he enrolled at ‘The College of William & Mary’ in Williamsburg where he studied mathematics, metaphysics, and philosophy, graduating with supreme honors in 1762. As a keen student, Jefferson took interest in learning different languages. As a student, he studied for 15 hours a day. Thomas also learned to play the violin and took a keen interest in arts. After graduating, he studied law with George Wythe and began practicing law in Virginia bar in 1767. From 1768 to 1773, he handled a number of cases and established himself as a reputed lawyer. 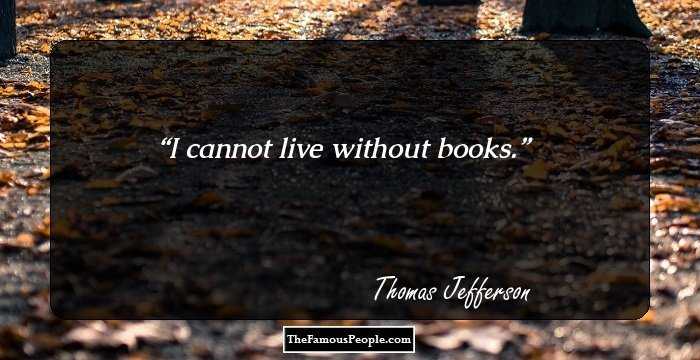 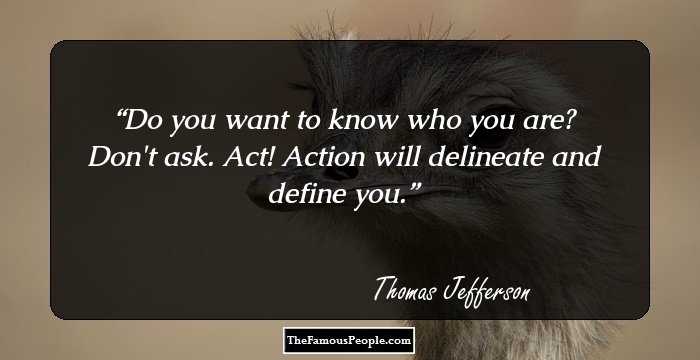 Quotes: You, Will
Early Political Life
Jefferson was appointed as a delegate to the ‘Second Continental Congress’ in 1775. With the beginning of American resolution of independence in 1776, he served as a member to a committee that was responsible for preparing the declaration of the independence resolution. The draft was presented to congress on 2 July and on 4 July 1776 the wording of the ‘Declaration of Independence’ was approved, making Jefferson a popular person in the country.
In 1776, Jefferson was elected to the new ‘Virginia House of Delegates.’ As a delegate, he instigated a series of reforms and bills to expose Virginia’s new status as a democratic state. Among his series of reforms, the most prominent were the laws to end primogeniture and establish freedom of religion in the state. Jefferson further produced a bill on ‘General Diffusion of Knowledge’ in 1778, which resulted in the establishment of an elective system of study in the ‘College of William and Mary.’ He proposed bills to eliminate death as a penalty, except in cases of murder and treason. However, his efforts did not yield results as crimes, such as rape remained punishable to death for a long time after the proposal of Jefferson’s bills with regards to capital punishment.
Governor of Virginia
Jefferson became the governor of Virginia in 1779 and remained in this position until 1781. It was during his tenure as the governor that the capital of Virginia was transferred from Williamsburg to Richmond in 1780. His constant efforts in the field of education were recognized in 1779, when George Wythe was appointed as the first professor of law at the ‘College of Williams and Mary.’ Jefferson’s governorship was marred by two British invasions which ruined his reputation as governor and he never won any election in Virginia thereafter. Jefferson served as minister to France from 1785 to 1789 and supported France against Britain when a war was declared between these two countries in 1793. 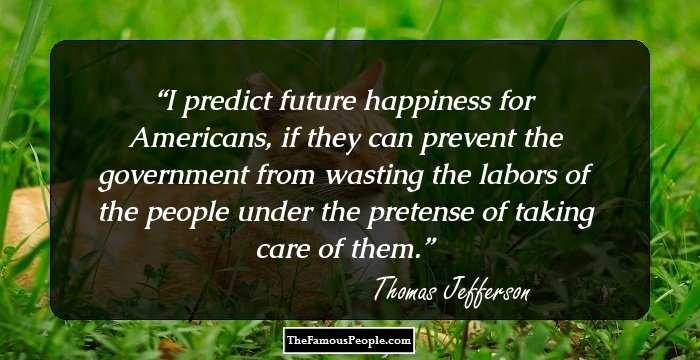 Quotes: Future, Happiness, I
Secretary State of the U.S
Jefferson became the first secretary of state in 1790, under the presidency of George Washington. As a secretary of state, he spoke against widespread Federalism in the U.S. and continued to view it as a threat to Republicanism. Along with James Madison, he co-founded and led the ‘Democratic-Republican Party’ and formulated a set of connections with Republican allies to fight the Federalists across the country.
Vice-Presidency & Presidency
After a failed bid for vice presidency in 1796, Jefferson became vice-president of the United States in 1797. Federalists, who were preparing for war with France, passed the ‘Alien and Sedition Acts’ in 1798 as a source of earning money through taxes. Jefferson harshly criticized these tactics and intensified his attack on Federalism, as he believed that Federalists had no right to exercise such power.
Thomas Jefferson ran for presidency for the first time in 1800. Though he did not campaign for his party, in accordance with the tradition at the time, he became the president of the United States in a landslide victory on 17 February 1801.
During his tenure as the president, he fought the ‘Barbary War,’ safe guarding the US Coast from pirates, and acquired Louisiana from France. Subsequently, he won a second term at the office in the 1804 presidential elections.
Life after Presidency
Thomas Jefferson remained active in American politics and participated enthusiastically in educational and cultural organizations. Education remained his prime concern throughout his life, and he took measures to promote higher education among people. His efforts finally fructified in 1819 when the ‘University of Virginia’ was founded. ‘University of Virginia,’ which was the first university to offer a complete array of elective courses, was opened in 1825.
Jefferson is also known for his love for architecture and archeology, a subject which was still developing at the time. He contributed to the architectural planning of the ‘University of Virginia’ which became an embodiment of science and beauty with its planned site surrounding lawn and linking arcades. The university, which is constructed in Greek and Roman style, represents a unique architecture and intellectual ideas of Thomas Jefferson, who became known as the father of the university.
In 1780, Jefferson became a member of ‘Benjamin Franklin’s American Philosophical Society’ and served as its president from 1797 to 1815. An avid wine lover, Jefferson traveled to France and other European countries in order to add to his collection of famous wines. In 1801, he published ‘A Manual of Parliamentary Practice’ whose second edition came out in 1812. After the ‘Library of Congress’ was burnt down by the British in 1814, Jefferson’s huge collection of books became a part of the new library, which is named after him in his honor.
Death
Thomas Jefferson died on 4 July 1826, a date which coincides with the 50th anniversary of the ‘Declaration of Independence.’ After his death, his assets were sold off in an auction to pay his huge debt. His mortal remains were buried at ‘Monticello,’ a home which he had built in his youth in Virginia
Recommended Lists:
Lawyers #110
Miscellaneous #1474
Leaders #49
Lawyers & Judges #180

Quotes By Thomas Jefferson | Quote Of The Day | Top 100 Quotes

See the events in life of Thomas Jefferson in Chronological Order