Thomas Cranmer was the first Protestant Archbishop of Canterbury and a leader of the English Reformation. As the Archbishop of Canterbury he was responsible for establishing the first doctrinal and liturgical structures of the reformed Church of England. Along with Thomas Cromwell who served as chief minister to King Henry VIII of England, he supported the principle of Royal Supremacy which gave the king power over the Church within his realm. He also advocated for the king’s desired divorce from Catherine of Aragon and helped in building the case for the annulment of this marriage. However, he was not much successful in making any radical changes to the church under Henry’s rule due to the turbulent political situation and power struggles between religious conservatives and reformers. Once King Edward VI ascended to the throne, opportunities opened up for Cranmer to implement major reforms. He was considered one of the outstanding theologians of his time and is credited to have written the first two editions of the ‘Book of Common Prayer’, a complete liturgy for the English Church. However, things started falling apart for him after Queen Mary ascended the throne. A Roman Catholic, she put Cranmer on trial for treason and he was burned at the stake. British People
British Men
Male Writers
Cancer Writers
British Writers
Childhood & Early Life
Thomas Cranmer was born on 2 July 1489, in Aslockton, Nottinghamshire, England to Thomas and Agnes Cranmer. He hailed from a family of modest means.
While nothing concrete is known about his childhood and schooling, it is believed that he attended a grammar school in his village.
He was sent to the Jesus College, Cambridge, when he was 14. He studied there for eight long years before completing his Bachelor of Arts degree. While studying logic, classical literature and philosophy at the college, he also began to collect medieval scholastic books.
He then embarked on a study on the humanists, Jacques Lefèvre d'Étaples and Erasmus, for his master’s degree and received his Master of Arts degree in 1515. Shortly afterwards, he was elected to a Fellowship of Jesus College.
He soon got married and because of this he was forced to forfeit his fellowship at Jesus College. 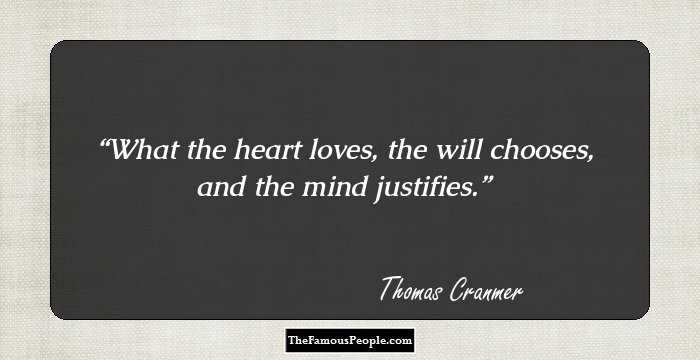 Quotes: Will, Heart
Continue Reading Below
Career
Thomas Cranmer started working as reader at Buckingham Hall (later reformed as Magdalene College) to fend for his family. His wife became pregnant and died in childbirth.
Following the death of his wife the Jesus College reinstated his fellowship. He started studying theology and was ordained by 1520. He received his Doctor of Divinity degree in 1526.
In August 1529, he had a chance meeting with Stephen Gardiner and Edward Foxe, two of King Henry VIII’s chief councilors. At that time the king desired to be freed from his first wife, Catherine of Aragon, in order to marry his mistress Anne Boleyn. The king was desperately looking for help and appointed Cranmer in the royal service with the request that he help the king in getting a divorce.
Cranmer agreed to write a propaganda treatise in the king’s interest and worked towards obtaining the annulment of Henry's marriage with Catherine of Aragon.
He was appointed the resident ambassador at the court of the Holy Roman Emperor, Charles V, in 1532. He was sent to Germany and was ordered to establish contact with the Lutheran princes in order to learn more about Lutheranism.
The archbishop William Warham died in August 1532 and Cranmer was summoned back to England. He was officially consecrated as the new Archbishop of Canterbury on 30 March 1533 in St Stephen's Chapel. His promotion came as a surprise to many as he had held only minor positions in the Church so far. But Cranmer knew that he had been promoted in order to expedite the king’s divorce.
After his appointment was approved by the pope, Cranmer convened his court at Dunstable in May 1533 and declared the king’s marriage to Catherine of Aragon void from the beginning. The king had secretly married Anne Boleyn a few months ago, and Cranmer pronounced the marriage of Henry and Anne Boleyn to be valid.
As a reformer, he played a pivotal role in bringing about major changes to the Church of England. He collaborated with Thomas Cromwell and the two men promoted the publication of an English Bible. In 1545, he composed a litany for the Reformed church in England which is still used in the church.
Cranmer was unable to bring about any radical religious reforms during the reign of King Henry due to political reasons. But once King Edward VI came to power, Cranmer was successful in bringing about the doctrinal changes which he desired to implement in the church. He also published the First Book of Common Prayer in 1549, during Edward’s reign. The Second Book of Common Prayer was issued in 1552.
Edward VI became seriously ill in 1553 and died. Even though the king had named his first cousin once removed, Lady Jane Grey, as his heir, Jane was deposed within 13 days of her accession by Edward’s half-sister Mary.
Queen Mary was a staunch Catholic and reversed Edward's Protestant reforms. Her accession to the throne also saw the downfall of Thomas Cranmer.
Personal Life & Legacy
Thomas Cranmer married a woman named Joan shortly after receiving his MA. His wife died in her first childbirth.
In 1532, he married Margaret, a Lutheran and a niece of the prominent Lutheran scholar Andreas Osiander. The couple had one daughter and one son.
After King Edward VI's death, Mary I became the Queen of England and Ireland. A Roman Catholic, she had over 280 religious dissenters burned at the stake. She had the Protestant Cranmer arrested and tried him for treason. He was eventually burned at the stake on March 21, 1556.
Recommended Lists:
Spiritual & Religious Leaders #88
Intellectuals & Academics #1231

See the events in life of Thomas Cranmer in Chronological Order