(Religious Author Who is Considered to be the First 'Existentialist' Philosopher)

Soren Kierkegaard was a famous Danish philosopher, theologian and religious author. He was well known for his criticism of the philosophies of Georg Wilhelm Friedrich Hegel, Friedrich Wilhelm Joseph Schelling and Karl Wilhelm Friedrich Schlegel. His philosophical work generally deals with the issues of living as a “single individual” and giving priority to concrete human reality over abstract thinking. His work in theology focuses mainly on Christian ethics and institution of the Church. It also deals with the difference between the purely objective proofs of Christianity and a subjective relationship to Jesus Christ. Kierkegaard was also interested in human psychology and his psychological work explores the emotions and the feelings of individuals when facing situations in life. His intellectuality was influenced by Socrates and the Socratic Method. Kierkegaard’s earlier works were mainly written under various pseudonymous characters, presenting their own distinctive viewpoints and interacting with each other. Rumi
DID WE MISS SOMEONE?
CLICK HERE AND TELL US
WE'LL MAKE SURE
THEY'RE HERE A.S.A.P
Quick Facts

Cause of Death: Falling

Søren Aabye Kierkegaard was born on 5 May 1813, in Copenhagen. His father, Michael Pedersen Kierkegaard, a wealthy hosier, was a self-made man; he was intelligent, but melancholic. Søren’s mother, Ane Sørensdatter Lund, was his second wife. His first marriage to Kirstine Nielsdatter was childless.

Raised as a shepherd boy, Michael experienced great hardship in his childhood. One day, while alone on the heath, he cursed God for his adversities and loneliness. In later years, he believed that he had earned God’s wrath because of that, successfully transmitting his belief to his children.

Before her marriage, Ane Sørensdatter, a cheerful but uneducated woman, was a housemaid with the family. After Kirstine’s death, she found herself pregnant with Michael’s child, which compelled him to marry her. That he got his maid pregnant soon after his wife’s death also added to Michael’s burden of guilt.

Born the youngest of his parents’ seven children, Søren had three sisters and three brothers, out of whom five died young. While Michael was convinced that all his children would die young because of his sin, Søren and his brother, Peter Christian, later a renowned bishop, lived to experience adulthood.

As a child, Søren idolized his father, quickly developing a bond with him, going out with him on imaginary walks during bad weather. During these walks, taking place within the confine of the study, his father would describe the make-believe sights, helping him to develop his power of imagination.

During this period, he probably also inherited from his father his heavy burden of guilt and a belief that his father’s long life and wealth was actually God’s revenge. It often made the young boy depressed and gloomy.

In 1821, after finishing his education at an elementary school, Søren was enrolled at Østre Borgerdyd Gymnasium, a well-regarded “School of Civic Virtue” in Copenhagen. Here, he had a classical education, excelling in Latin and history, finally graduating in 1830.

In 1831, he entered the University of Copenhagen with theology. But he soon lost interest in that, instead being drawn towards literature and philosophy, especially studying fictitious literary figures like Don Juan and Faust, trying to find an existential model that he could follow.

Although he was aware about his father’s sense of gloom since his childhood, quite often becoming depressed because of that, it was only in 1834 that he came to know the reasons. It came as a shock, making him leave home, abandoning the Christian faith in which he was brought up.

Estranged from his father, living with mental turmoil, he began a new search. In 1835, he wrote, “The thing is to find a truth which is true for me, to find the idea for which I can live and die.… What is truth but to live for an idea?”

In 1838, Søren returned home, being reconciled not only with his father, but also with Christianity, deciding to live by its tenets. Also after his father’s death in the same year, he decided to complete his formal education, financing it with his inheritance of approximately 31,000 rigsdaler.

In June 1841, he completed his dissertation, ‘Om begrebetironi med stadigthensyntil Socrates’ (On the Concept of Irony, with Constant Reference to Socrates), defending it in September. Finally on 20 October 1841, he graduated from the University of Copenhagen with a Magister Arutim. 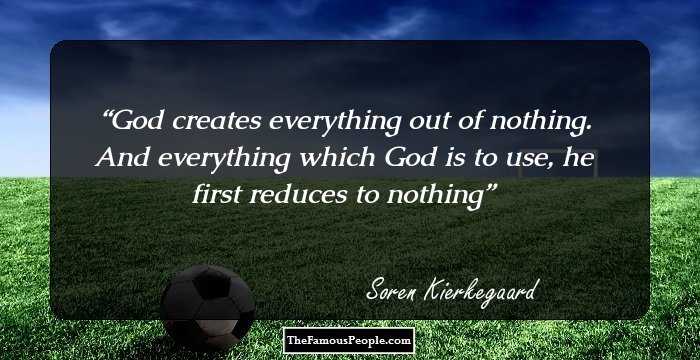 Because of his inheritance, Søren Kierkegaard did not have to look for employment. Instead, he concentrated on writing. Soon after completing his thesis in June 1841, he started working on his first book, ‘De omnibus dubitandumest’ (Everything must be Doubted), but it was published only after his death.

In October 1841, immediately on receiving his degree, he left for Berlin, intending to spend the winter there and attend German philosopher Friedrich Wilhelm Joseph Schelling’s lectures. Although the lectures proved disappointing he used the opportunity to perfect his German, also attending operas and plays.

It was during his stay in Berlin that he started working on his first major publication, ‘Enten – Eller: etlivs-fragment’ (Either/Or: A Fragment of Life), returning with it to Copenhagen in March 1842, completing it by the year end. Later, it turned out to be his magnum opus.

Using the pseudonym of Victor Eremita and his own money, Kierkegaard had ‘Enten – Eller’ published on 20 February 1843. Three months thereafter, he published 'To opbyggelige Taler' (Two Upbuilding Discourses), with the aim of resolving ideas that had been left unsettled in his first book.

In 1843-44, he wrote several other discourses, some of which were later collected as ‘Opbyggelige Taler’ (Eighteen Upbuilding Discourses). Also in 1843, he published two other works: ‘Frygtog Bæven’ (Fear and Trembling) under the pseudonym of Johannes de silentio and ‘Gjentagelsen’ (Repetition) as Constantin Constantius.

Continuing to write, Søren Kierkegaard published several other pseudonymous books in 1844. Among them was ‘Philosophiske Smulereller En Smule Philosophi’ (Philosophical Fragments). Published on 13 June under the pseudonym of Johannes Climacus, it was a Christian philosophical work, earning both praise and criticism.

On 30 April 1845, he had ‘Stadierpå Livets Vej’ (Stages on Life's Way) published under the pseudonym of Hilarius Bookbinder. Written as an extension of ‘Either/Or’, it dealt with the religious realms while the former book dealt mainly in aesthetic and ethical realms.

On 22 December 1845, ‘Stadierpå Livets Vej’ was criticized by Peder Ludvig Møller, a contributor to and the editor of ‘The Corsair,’ a journal known for satirizing well-known people. In reply, Kierkegaard wrote two articles, which instigated further attack from the paper, a tirade that continued for a number of months.

Søren Kierkegaard’s next major work, ‘Afsluttendeuvidenskabelig Efterskrifttil de philosophiske Smuler’ (Concluding Unscientific Postscript to the Philosophical Fragments) was published on February 28, 1846, under the pseudonym of Johannes Climacus. It was a poignant attack against Hegelianism, especially Hegel's “Science of Logic.”

Although by then, Kierkegaard’s authorship was a well-known fact, he insisted on using pseudonyms for further publications because they had been created to symbolize distinctive views. Also after publishing ‘Afsluttendeuvidenskabelig’ he decided to retire from writing and become a country pastor, but later abandoned the idea. 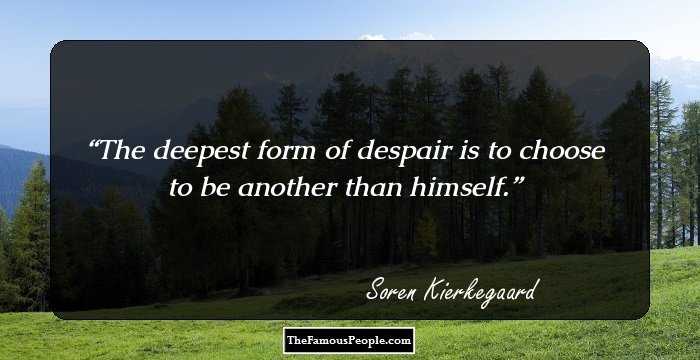 On 13 March 1847, Søren Kierkegaard began his second innings with the publication of 'Opbyggelige Taleriforskjellig Aand' (Edifying Discourses in Diverse Spirits). With this publication, he moved from ‘Upbuilding discourses’ to ‘Christian discourses’. More importantly, it is one of the few works that he published under his own name.

On 29 September 1847, he had 'Kjerlighedens Gjerninger' (Works of Love) published. Dealing with the Christian conception of agape love or the love that originates from God, it was also published under his own name.

In 1848, he had two books published. Among them, ‘Christelige Taler' (Christian Discourse), divided in four parts, was published on 26 April under his own name. Interestingly, he wrote the parts two and four before writing one and three.

The second book published in 1848 was 'Krisenogen Kriseien Skuespillerindes Liv' (The Crisis and a Crisis in the Life of an Actress). Written under the pseudonym of Inter et Inter, it was a collection of previously published newspaper articles, reflecting the life of Johanne Luise Heiberg.

His next major work was ‘The Point of View for my Work as an Author’. An autobiographical work written in 1848, it was partly published in 1851. In this work, he tried to explain his pseudonymous works. The work was fully published after his death by his brother Peter.

’The Sickness unto Death’ was another of his works published in 1849. It focused on the apparent insincerity and triviality not only of Christendom, but also of the modern society in general.

‘Practice in Christianity’, which set a very high standard for Christians, antagonized many members of the clergy, comfortable in the notion of established Christianity. Bishop J. P. Mynster, a friend of Kierkegaard’s father, was very alarmed as it was taken by many as criticizing him.

Continuing to attack the church, Søren Kierkegaard published ‘For Self-Examination’ and ‘Two Discourses at the Communion on Fridays’ in 1851. In 1852, he wrote another book, ‘Judge for Yourselves!’ Concurrently, he also started writing a series of articles in Fædrelandet (The Fatherland) and publishing a number of pamphlets called ‘Øjeblikket’ (Moment).

Things came to a head when on the death of Bishop Mynster in early 1854, he was referred to as "a witness to the truth”, a phrase originally used for the Christian martyrs. So far Kierkegaard had restrained himself out of respect to his father’s friend; now, he exploded.

From December 1854 until his death one year later, he continued to write series of articles condemning the clergy for their materialistic life and diluted doctrine. While he admitted it was impossible to live up to the demands of Christianity, he attacked the clergy for their pretense to do so. 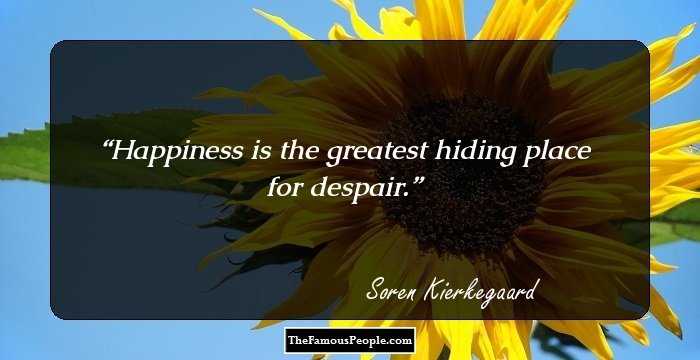 ‘Enten – Eller: etlivs-fragment’, published in 1843, is one of Søren Kierkegaard’s best works. In this work he established that there were two ways of life: the aesthetic and the ethical, out of which the aesthetic life, based sensory pleasures, leads to despair. Once miserable, man finally tries to enter the ethical life.

Kierkegaard considered ‘Practice of Christianity’ to be his best and most perfect work. Discussing in details ideas like ‘leap of faith’ and ‘indirect communication’, he emphasized that faith in God cannot be rational because one cannot conclusively prove His existence. He also discounted the idea of systematic theology in Christianity.

On 8 May 1837, Søren Kierkegaard met Regine Olsen, becoming engaged to her on 8 September 1840. But due to his depression, he soon began to have doubts about his ability to become a good husband and therefore broke his engagement in 1841. There was no other woman in his life.

Kierkegaard mostly stayed at home and did not receive any guest. Only poor people, who came asking for help, were allowed inside the house. According his nephew, Troels Frederik Lund, he never accepted interest, spent half of his fortune on publishing his works and donated considerable amounts of money to the poor.

On 2 October 1855, Søren Kierkegaard collapsed on the road, suffering from a paralyzing stroke. He was admitted to the Frederiks Hospital in Copenhagen, where he remained until his death on 11 November 1855. The exact cause of his death is not known.

Steadfast in his belief, he refused commune from the clergy before his death. In spite of that, he was given a Christian burial in the Assistens Kirkegård in the Nørrebro section of Copenhagen.

Quotes By Soren Kierkegaard | Quote Of The Day | Top 100 Quotes

See the events in life of Soren Kierkegaard in Chronological Order 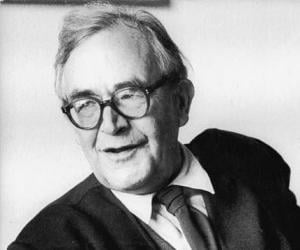 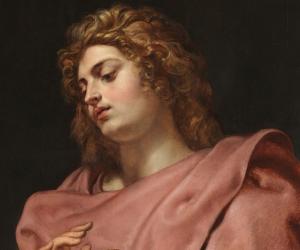 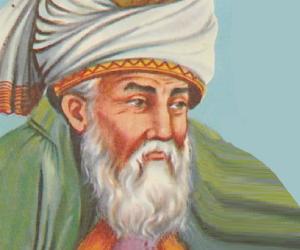 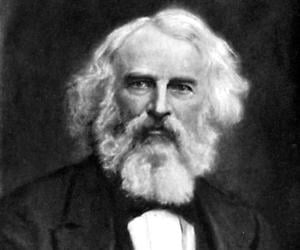