Cyrano de Bergerac is one of the forgotten heroes from the world of theatre. Though he lived for just a short span of 36 years, he achieved quite a lot during this brief period. Even before he entered the world of creativity, Cyrano had earned the reputation of being a great swordsman during his military days. His close friend and biography writer Henry Le Bret had mentioned that Cyrano ‘always passed for a man of singular rare wit’ in the introduction page of the latter’s famous book ‘Voyage to The Moon’, such was the impression Cyrano had created amongst his folks. Many of the plays which Cyrano wrote were published and performed on stage repeatedly. Cyrano’s work was popular amongst even playwrights who lacked ideas. One of France’s popular playwrights at that time, Mortiere, had plagiarized few of Cyrano’s ideas, and included them in his play 'Les Fourberies de Scapin’. Like many Bohemians, Cyrano had many admirers and equal number of haters. Cyrano’s life alone has been an inspiration for numerous writers and directors, who adapted the man’s experiences into numerous operas, plays and also movie. Anatole France
Novelists #218
Playwrights #98
Writers #776
DID WE MISS SOMEONE?
CLICK HERE AND TELL US
WE'LL MAKE SURE
THEY'RE HERE A.S.A.P
Quick Facts

French People
French Men
Male Writers
Pisces Writers
French Writers
Childhood & Early Life
Cyrano Bergerac was born on March 6, 1619, in Paris, to Espérance Bellanger and Abel de Cyrano. Cyrano’s father was a lawyer and was the lord of Mauvières and Bergerac.
At the tender age of seven, Cyrano was sent to a country priest for his primary education. Later, Cyrano moved to Paris, and pursued his further education from an institute called ‘College De Dormans-Beauvais’. However, Cyrano didn’t complete his degree. 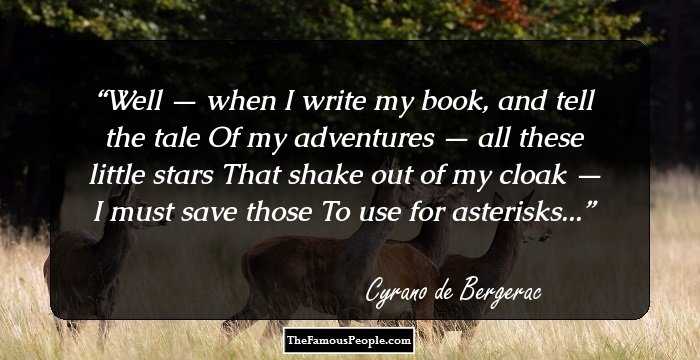 The Best Black Actresses Of All Time
Career
Post his education, Cyrano joined the infantry, also known as the corps of the guards, and served for the forces during the year 1639-40. Cyrano was just nineteen years old at the time he joined the army.
During the ‘Siege of Arras’ in 1640, Cyrano was terribly wounded, after which he hung his boots from military services. He then spent quite some time working with noted mathematician, scientist, and philosopher Pierre Gassandi. During the days he spent with Gassandi, Cyrano also met other intellectuals such as Molière' and Chapelle. He also came in contact with David Dupron from whom Cyrano learnt his lessons in dancing.
Cyrano then ventured into writing. His first work is said to be 'Le Pédant Joué’, a play which belonged to the genre of comedy. Though this play was written in the year 1645, it is unclear about when the act was first performed. This piece of work was published nine years after it was written by Cyrano.
The very next year, Cyrano penned the introduction for ‘The Judgement of Paris’, a poetic work composed by one of his closest friends Charles'Coypeau' d'Assoucy.
One of the most prominent works of Cyrano’s career was 'La Mort d’Aggrippine’, which was written in 1646. This tragic play, which was divided into five acts dealt with the exploitation of power and growth of corruption. The play went on to become so popular that it was published in 1653, and was performed on stage twice, the following year. Even after two centuries, the play was brought back to the public in 1872.
During the last few years of his life Cyrano started writing two of his very influential works titled ‘Voyage To The Moon’ and 'The States and Empires Of The Sun’. Though the latter was incomplete, both these works were published during the years 1657 and 1662, respectively. 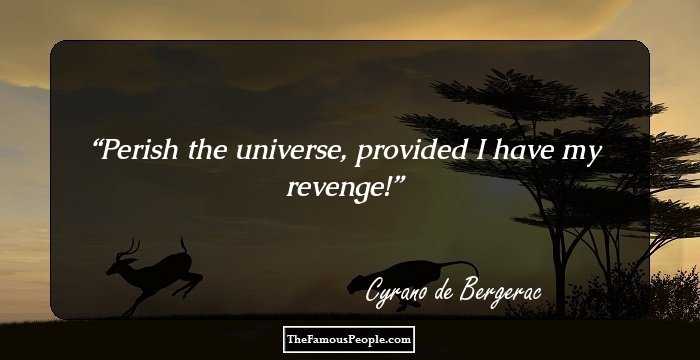 Quotes: I
Major Works
A compilation of Cyrano’s works, titled ‘Oeuvres Diverses' which translated to ‘Diverse Works’, was published by his friend Charles Coypeau in 1653. The book consisted of works such as ’The Death of Agrippina’, 'The Pedant Outwitted' and 'The Letters’. The book was also known for a famous portrait of Cyrano which was done by one of Cyrano’s friends named Zachary Heince.
Personal Life & Legacy
Cyrano was originally named Savinien. He frequently changed his names before finally arriving at Cyrano. Few of his fictitious names were Hercule de Bergerac, de Bergerac, Alexandre de Cyrano Bergurac, and de Bergerac Cyrano.
Cyrano died on 28 July 1655, at the age of 36. The reason behind Cyrano’s death continues to be a mystery. It’s claimed by many that Cyrano had ended up in an asylum during his last days since the ‘artist in him had turned mad with numerous ideas’. Cyrano’s brother Abel was accused of forcing the playwright into such a place.
One of the best tributes paid to Cyrano by the theatre world was the play ‘Cyrano de Bergerac’ directed by noted playwright Edmund Rostand.
This play which was staged post Cyrano’s death, suggests that the French playwright succumbed to death after a wooden beam fell on his head during one of the visits to his patron Duc D'Arpajon’s residence.
Cyrano’s life went on to become an inspiration for various operas in the 1900s. The adaptations were made by various popular playwrights, such as Walter Damrosch, Franco Alfano, and Eino Tamberg.
Noted writer Louis Gallet had penned a book named ‘The Adventures of Cyrano de Bergerac’. The central character of this adventure tale was written based on incidents from Cyrano’s life.
The year 1990, saw the release of a movie based on Cyrano’s life titled ‘Cyrano de Bergerac’. This film received much acclaim from critics and audiences alike.
Trivia
Many sources claim that Cyrano was a homosexual, and was involved in a relationship with his friend Charles Coypeau.
You May Like