One of the major writers in the era of French Romanticism, Alfred de Vigny was a poet, playwright and novelist who began his career as a military man before shifting his focus to writing. A deep thinker and an empathetic individual, he is often considered to be the most philosophical among all the French Romantic writers. He was born into an aristocratic family though his family lost much of its wealth during the French Revolution. As a young man he harbored a love for the arms and easily obtained a position in the army due to his aristocratic legacy. However, he never got the opportunity to fight in the battlefield and was thus bored with this career. Meanwhile he started writing poems, carrying forward the passion for literature he always had from his childhood days. Soon the purpose of his life became clear and he left the military to embark on a career as a writer. He started out as a poet and was soon writing plays and novels as well. His works became popular in the literary circles and he was hailed as the rising star of the Romantic Movement which was sweeping France during the 19th century. Alfred de Musset
27th March In History
DID WE MISS SOMEONE?
CLICK HERE AND TELL US
WE'LL MAKE SURE
THEY'RE HERE A.S.A.P
Quick Facts

French People
Novelists
Playwrights
French Men
École Polytechnique
Childhood & Early Life
He was born on 27 March 1797 into an aristocratic family in Loches. His father, L�on Pierre de Vigny who was 60 years old at the time of Alfred’s birth, was a veteran of the Seven Years’ War. His mother, twenty years younger than her husband, was a strong-willed woman. He was their only son.
His mother took a keen interest in his education. He was brought up in Paris and he attended the �cole Polytechnique at the Lyc�e Bonaparte. His family, though aristocratic had lost much of its wealth during the French Revolution.
He harbored a dream of joining the military as a young boy. He also loved to read and write. 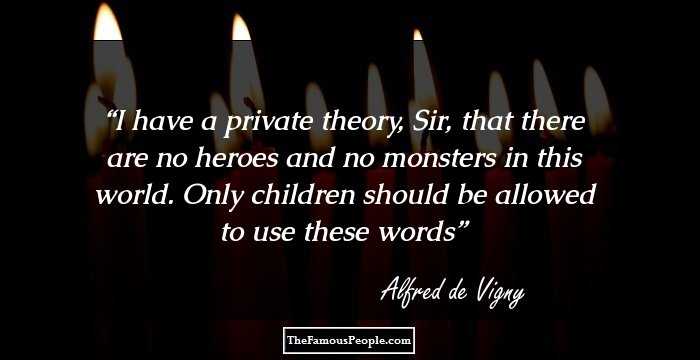 Quotes: Children, I
Continue Reading Below
Career
Since he was from an aristocratic background, he was made a second lieutenant in the king’s guard in 1814 when he was 17 years old. He was looking forward to a meaningful military career, full of exciting adventures. However, his work was limited to garrison duty and he got no chance to fight on the battlefield. This badly disillusioned him.
Bored with the military work, he had also started writing poetry in his free time. His first poem, ‘Le Bal’ was published in 1820, and a couple of years later he published a collection of verse titled, ‘Po�mes’.
In 1822, he was promoted to first lieutenant, and the next year, to the rank of captain. However, he was very disappointed with the military and started taking long leaves of absence to concentrate on his writing. He brought out an expanded version of ‘Poemes’, titled as ‘Po�mes antiques et modernes’ in 1826.
He published a historical novel, ‘Cinq-Mars’ in 1826 which was about the conspiracy of the Marquis de Cinq-Mars against the Cardinal de Richelieu. The novel was the first historical novel in French and was inspired by the works of Sir Walter Scott.
He was beginning to gain much fame as a writer and a poet, and thus he left his military career in 1827. An English theater troupe visited Paris the same year, rekindling interest in Shakespeare. Vigny translated some of the great playwright’s works and was inspired to start writing his own plays.
He completed his first original play, ‘La Mar�chale d'Ancre’, a historical drama in 1831 in which he recounted the events leading up to the reign of King Louis XIII.
In 1835, he produced ‘Chatterton’, a play that would ultimately be counted among the best French Romantic dramas. It was based on the life and early, tragic death of the English poet Thomas Chatterton who had long fascinated the Romantics.
He wrote about military life in ‘Grandeur et servitude militaires’ (1835) which was about the contradictions of military life. It was a tribute to the soldiers who in spite of so many sufferings still maintained dignity and performed their duties towards the nation.
His mother died in 1838 and he inherited the property of Maine-Giraud to which he retired. There were many problems in his personal life because of which he became a recluse living a secluded life away from the city.
For years he had been unsuccessfully trying to become a member of the Acad�mie fran�aise. His wish was finally fulfilled in 1845 when he was elected to it.
He stopped publishing during his later years though he still wrote a lot. Many of his works were later collected and published posthumously. He was a deep thinker and had a keen interest in Buddhism. He was known for his pessimistic and stoical philosophy. 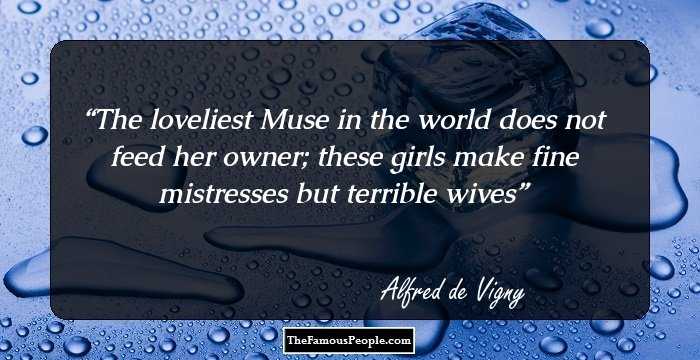 Major Works
Known for his pessimism and meditative tone, Vigny’s best known work was the play, ‘Chatterton’, based on the tragically short life of the teenage English poet Thomas Chatterton. This play is considered to be one of the finest dramas of the French Romantic movement.
Personal Life & Legacy
He married a young English woman, Lydia Bunbury, in 1825 against the wishes of her father. The marriage, however, soured with time and the couple had no children. His wife became an invalid which further added to their domestic woes.
He became involved in a relationship with the great actress Marie Dorval. He was very possessive of her and this relationship was a stormy one.
In spite of his troubled marriage he lived with and cared for his ill wife till the very end. He experienced severe stomach pains during his later years and died on 17 September 1863, of what is believed to be stomach cancer, . 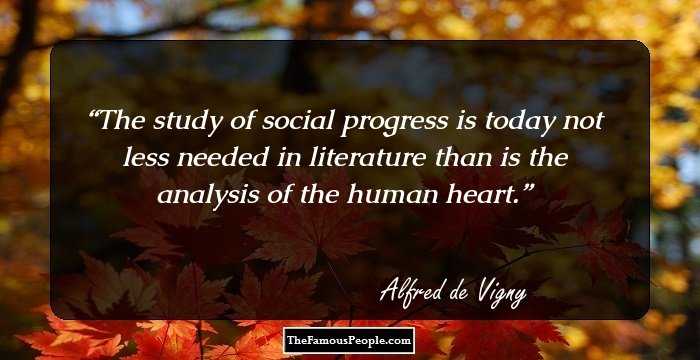