Advanced Search
Robert E. Lee was a famous Confederate general and commander of the Northern Virginian Army during the ‘American Civil War.’ His brilliance in war waging strategies and achievements during the ‘Civil War’ makes him an iconic figure. He belonged to a family of ruling class in Virginia. At an early age, he joined the American army at West Point, Virginia. He completed his engineering studies headed by the ‘Army Corps of Engineers.’ His active participation in the ‘American Civil War’ and his illustrious career continue to serve as an inspiration to many young Americans. His contribution to the American history is celebrated in many ways. His birthday is celebrated as a public holiday in different parts of America. Many memorials and statues have been erected in his remembrance. His contribution as president of ‘The Washington College,’ Virginia has been of utmost prominence. He has been commemorated on US postage stamps. In 2002, one of his items was sold at an auction for a whopping $630,000. On September 29, 2007, three of his Civil War-era letters were sold for $61,000. American People
American Men
United States Military Academy
Male Leaders
Capricorn Leaders
Childhood & Early Life
Robert Edward Lee was born on 19 January 1807, in Westmoreland County, Virginia, USA, to Major General Henry Lee III, also known as the ‘Light Horse Harry,’ and his second wife Anne Hill Carter. He belonged to the ruling class of Virginia, with several members of his family at powerful positions in the Virginian government. His father was the Governor of Virginia and one of his great-grand-parents was a prominent Virginian colonist.
Robert Lee attended school at Eastern View, Fauquier County, and shifted to ‘Alexandria Academy’ where he developed a liking for mathematics. In 1824, Robert Lee was appointed to the ‘United States Military Academy’ at West Point, on the recommendation of his relative William Henry Fitzhugh. 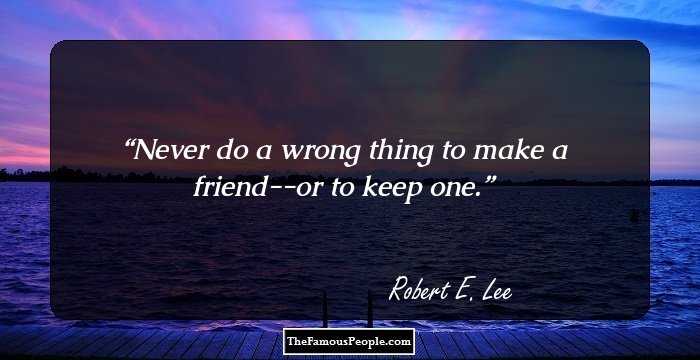 Quotes: Never
Continue Reading Below
Career
In 1825, Robert Lee started his studies at West Point. The focus of the studies was on engineering, headed by the ‘Army Corps of Engineers.’ He graduated with second position in his class, without incurring even a single demerit during his course of study.
In 1829, Robert Lee was ordered to build a fort on the marshy island of Cockspur, Georgia. The mission was unsuccessful and he was transferred to Fort Monroe, Virginia Peninsula.
In 1834, Robert Lee was transferred to Washington to assist General Gratiot. In 1835, he was transferred again to survey the southern border of Michigan where he served as Andrew Talcott’s assistant.
In 1837, he supervised the engineering work at St. Louis harbor. He was promoted to the position of a captain because of his devotion and brilliance. In 1842, Captain Robert Edward Lee arrived as Fort Hamilton’s post engineer.
From 1846 to 1848, he worked as a chief aid to Winfield Scott in the ‘Mexican-American War.’ Due to his exceptional performance in the war, he was promoted to brevet major. Over a period of time, he received additional brevet positions, though his permanent rank was still Captain of Engineers.
From 1848 to 1851, Robert Lee served at Fort Carroll in Baltimore harbor. In 1852, he was appointed as Superintendent of the Military Academy, West Point. During his stay at West Point, he spent time training the cadets and improving the curriculum of the training courses.
In 1855, he was promoted to second-in-command of the Second Cavalry regiment, Texas. His new position had him heading the combat command.
In 1859, President James Buchanan ordered Robert Lee to command the forces to suppress the slave rebellion in federal arsenal at Harper’s Ferry, Virginia. The mission was a success under his supervision.
In March 1861, he was appointed as Colonel of the First Regiment of Cavalry by President Abraham Lincoln. In a short span of time, he was promoted to Major General and was given the responsibility to expand the army in order to fight the Southern states. He commanded the United States Army at Fort Mason, Texas for the last time.
In April 1861, Robert Lee resigned from the Army and commanded the Virginia state forces. He was defeated in his first field assignment at the ‘Battle of Cheat Mountain.’ He was then demoted and sent to organize the Carolina and Georgia seaboards.
In 1862, he became the commander of the Army of Northern Virginia. Subsequently, he was criticized for his passive style of command and the press called his army ‘Granny Lee.’ But the series of successes achieved by Robert Lee and his army changed the popular public opinion. After the ‘Seven Days Battles,’ his men started addressing him as ‘Marse Robert’ out of respect and love.
In 1863, Robert Lee fought in the three-day ‘Battle of Gettysburg’ in Pennsylvania. This battle caused the largest number of causalities in the history of ‘American Civil War.’ His men lost the battle to the union forces under George G. Meade. As a consequence, he sent a letter of resignation to President Davis, but Davis refused his resignation.
In 1865, Union general-in-chief Lt. General Ulysses S. Grant started a battle to destroy Robert Lee’s army. Robert Lee, cornered in the capital city of Richmond, resisted the attacks with full vigor and a number of battles were fought in the process: ‘Wilderness,’ ‘Spotsylvania Court House,’ and ‘Cold Harbor.’ Around the same time, he was promoted to general-in-chief of the Confederate forces. Lee’s inadequate army could not fight in these battles over a long period of time and he finally surrendered.
In 1865, Robert Lee was appointed as the president of ‘Washington College,’ Lexington, Virginia (now known as the Washington-Lee University) and he continued in this position until his death. He worked towards changing the image and scope of the college and added subjects in commerce, journalism, and law. 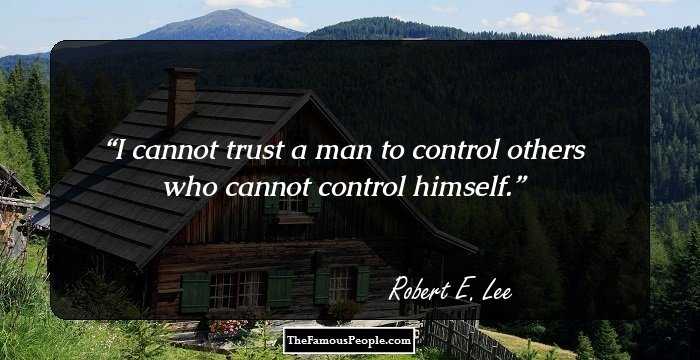 Quotes: I
Personal Life & Legacy
In 1831, while he was stationed at Fort Monroe, Robert Lee got married to Mary Anna Randolph Custis. The couple had seven children, three boys and four girls.
Robert Lee died on 12 October 1870, at the age of 63, after suffering a stroke two weeks earlier.

See the events in life of Robert E. Lee in Chronological Order