(37th President of the United States)

Advanced Search
Richard Milhous Nixon was the 37th US president, who had to resign from office due to his involvement in the Watergate Scandal. Born and raised in relative poverty, he had to work at his father’s store before going to school. Yet, he managed to excel both in studies and debates. He entered politics shortly after he began his career in law, becoming a member of the House of Representatives at the age of 33, Senator at 37, the vice president of the USA at 40 and the president at 55. During his first term at the White House, he was able to end the American involvement in Vietnam, opened direct line of communication with China and signed 10 agreements with the USSR. At home, he brought measures to control inflation, which helped him win another term as the president with a landslide. However, the Watergate Scandal that came to light shortly after his reelection forced him to resign from office. He is the only US President to have been impeached. He spent his last years in New York City, writing, traveling and speaking, and eventually becoming a renowned statesman. American Celebrities
Political Leaders
American Men
Duke University
Tall Celebrities
Childhood & Early Years
Richard Milhous Nixon was born on January 9, 1913, in the suburban city of Yorba Linda in Orange County, California. At the time of his birth, his father Francis Anthony Nixon owned a lemon ranch outside Los Angeles. His mother Hanna Milhous Nixon was a religious woman, who had a great influence on the future US president.
Richard was born second of his parents’ five children. His eldest brother Harold Samuel died at the age of 24. Among his three younger brothers, Francis Donald and Edward Calvert reached adulthood, while his second younger brother, Arthur Burdg, died at the age of seven.
In 1922, his father’s lemon grove failed, and his family moved to the Whittier city of California, a region populated by the Quaker community. His father opened a grocery store-cum-gas station there. However, the Nixons remained impoverished, and the whole family had to work in the shop to make ends meet.
The Nixon sons were raised in accordance to the Quaker faith, which forbade alcohol consumption, dancing and swearing. His father was said to have been an abusive man who occasionally beat his sons. Although Richard absorbed his father’s discontent with their working class situation and developed a strong sense of ambition, he also became an awkward and withdrawn young man who best worked alone.
Richard began his education at the East Whittier Elementary School where he was elected president of the eighth grade. For his secondary education, he was sent to the Fullerton Union High School because his parents held his previous school responsible for his older brother’s debauched lifestyle.
To reach Fullerton, Richard had to spend one hour on the bus, each way. Therefore, he started spending the weekdays with his aunt in the city. He proved to be an excellent student who regularly participated in debates, receiving guidance in public speaking from his English teacher H. Lynn Sheller.
Sheller taught him that public “speaking is conversation” and one should not shout at people. He remembered this principle for the rest of life, winning many championships in debate. He was however less lucky in volleyball, as he never got a chance to play in tournaments despite practicing regularly.
In September 1928, at the start of his junior year, Richard was brought back home and enrolled at the Whittier High School. Life was very tough for the Nixons during this period. His older brother had developed tuberculosis, and his mother had taken him to Arizona.
While living with his father and younger brothers in Whittier, Richard often had to get up at four o’clock in the morning to purchase vegetables for their shop. He first drove his truck to Los Angeles to buy fresh produce and upon his return, he had to wash and display the merchandize in the store before leaving for school.
Despite his numerous responsibilities at home, he continued to excel in studies and debate. He graduated high school in 1930 and placed third in the class of 207. Following that, he received a tuition grant to study at the ‘Harvard University,’ but could not make it as he was still required at his father’s shop.1930
In 1930, he enrolled at the Whittier College, financing his studies with a grant received from his maternal grandfather. At college, he participated in debates, played basketball and football, but was snubbed by Whittier’s literary society, Franklins, due to his ordinary background. He therefore cofounded a new one called the ‘Orthogonian Society’.
In 1934, Richard graduated summa cum laude from the ‘Whittier College’ and entered the ‘Duke University School of Law’ with full scholarship. He retained full scholarship throughout his stay at Duke despite a stiff competition among the students of second and third year.
At Duke, he fared well and became the president of the student bar association as well as a member of the Order of the Coif. In June 1937, he graduated by placing third in his class. Thereafter, he applied for a post in the ‘Federal Bureau of Investigation’, but did not receive any response from the agency. 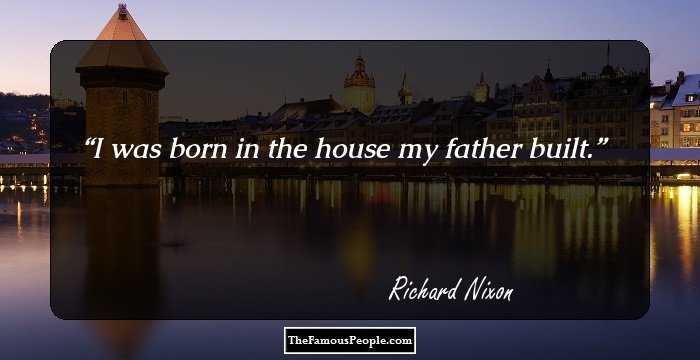 Quotes By Richard Nixon | Quote Of The Day | Top 100 Quotes

See the events in life of Richard Nixon in Chronological Order