Oscar Milosz was a French-Lithuanian poet. While mostly unrecognized in his time, he later became a classic figure of turn-of-the-century poetry. A writer of verse, drama, essays, fiction and a compiler of Lithuanian folk tales, in his later years, he became an esteemed diplomat for Lithuania at the League of Nations. Raised in the countryside of present day Belarus, he was sent to study in Paris at the age of 12. His early works, like the 1889 Le Poème des Décadencesn, are characterized by his loneliness and melancholy away from his family. In 1914, while studying Emanuel Swedenborg and Dante Alighieri, he is said to have experienced a divine vision that forever changed his style. Today, Milosz is primarily associated with his more mature and imagery rich style, packed with alchemical symbolism, Christian cosmology and isolated imagery. During World War I, he was conscripted into the Russian army. During this time, he became associated with the Lithuanian independence movement. When Lithuania attained independence, he became a highly esteemed diplomat of the new country to France. Over his career, he produced three plays, two novels and a staggering number of poems, most of which have only been recently assembled into collections

Victor Hugo
Poets #2339
Writers #8933
Continue Reading Below
DID WE MISS SOMEONE?
CLICK HERE AND TELL US
WE'LL MAKE SURE
THEY'RE HERE A.S.A.P
Quick Facts

French Celebrities
Male Poets
Gemini Poets
French Poets
Male Writers
Childhood & Early Life
Oscar Vladislas de Lubicz Milosz was born on May 28, 1877 in the then Russian-controlled city of Čareja.
His father was a former Russian army officer named Vladislasde Lubicz Milosz. His mother, Marie Rosalie Rosenthal, was a Jew from Warsaw.
He was baptized on July 2, 1886 at the St. Alexander Roman Catholic church in Warsaw.
He was the only child of his parents. His parents did not become officially married until he was 17.
In 1889, at the age of 12, he was sent to secondary school at Lycée Janson de Sailly in Paris.
After completing secondary school, he stayed in Paris, studying Mediterranean civilizations, Egyptian antiquities, Assyrian and Hebrew.
From 1896 to 1899, he attended École spéciale des Langues orientales where he studied under Professor Eugéne Ledraina, learning to translate old bibles from Hebrew. 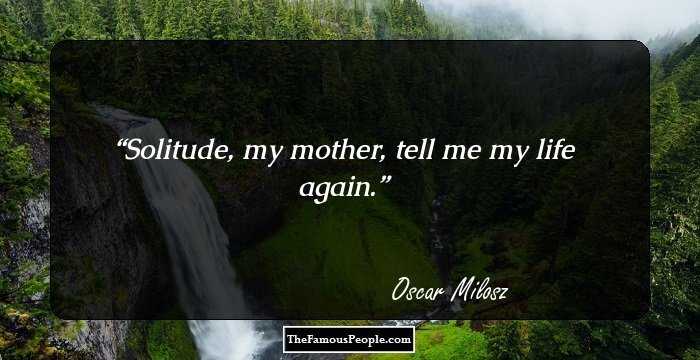 The Most Popular US Veterans
Career
In 1889, he published his first poem, Le Poème des Décadences while traveling throughout Europe and North Africa.
His 1906 poem, Les Sept Solitudes, was published with the help of poet Nicolas Beauduin.
His 1911 poem, Les Elements, highlights his younger and darker writing style.
He published two plays - Miguel Mañara: mystère en six tableaux in 1913 and Méphisobeth in 1919.
From 1915 to 1922, he published smaller poems, choosing to focus more on his plays and essays. These poems were Nihumim, Adramandoni and La Confessions de Lemuel.
In 1914, after reading works of Emanuel Swedenborg, he began studying alchemy. Coincidentally, his post-1914 poetry became more unique and structured.
In 1916, during World War I, Milosz was forced to join the French Navy press corps under Russian command.
In 1917, during the Russian Revolution, his estate was seized only to be returned in 1920 by the French. During this time, he was destitute as his writings never sold well.
From 1930 to 1933, he published two collections of Lithuanian folk tales, Contes et Fabliaux de la vieille Lithuanie and Contes lithuaniens de ma Mère l'Oye. Both were translated into English.
Continue Reading Below
Major Works
He published his first and only novel ‘L’Amoureuse Initiation’ in 1910. It is a story about the passion and jealousy of an 18-year-old man growing up in Venice.
In 1924, he published a philosophy essay that would later become one of his most famous works - Ars Magna.
In 1927, he published Les Arcana, a collection of 106 verses that would later become his most famous metaphysical and cosmological work. After its release, he declared his poetic career over.
In 1933, just three years before his death, he released a single and final poem, Psalm of the Morning Star.
Awards & Achievements
In 1920, he was appointed as Chargé d'Affaires, a prestigious role as a French diplomat and businessman in charge of the newly independent Lithuania.
In 1931, he was awarded French citizenship and their highest honor - the Légion d'honneur.
Personal Life & Legacy
He was not married and had no children.
While battling cancer at the age of 61, he had a heart attack and died on his Fontainebleau Estate on March 2, 1939.
In 1966, the Les Amis de Milosz Poet Society added a plaque to the Fontainebleau Estate where he died. The group still gathers there every year on the anniversary of his death.
It wouldn't be until 1985 that the first volume of his work ‘The Noble Traveller’ was published. This collection of poetry, essays and verse translated into English is largely responsible for Milosz’s resurgence in popularity today.
In 2004, his poems were compiled into ‘Books of Silence’ by composer Andris Dzenitis.
Trivia
He was a distant cousin of the Polish writer and winner of the 1980 Nobel Prize winner, Czesław Miłosz.
The French symbolism poet Paul Fort was a fan of Milosz, helping him gain popularity for his published works with positive reviews.
He was fluent in French, German, English, Spanish, Italian, Polish and Russian. He could also read Hebrew and Latin.
On March 29, 1919, he made his famous statement “I am a Lithuanian poet writing in French.”
Studying alchemy and Christian meditation, he predicted the end of the world in the year 1944
You May Like

See the events in life of Oscar Milosz in Chronological Order