(French Author and Artist Who Was One of the Foremost Creatives of the 'Surrealist', 'Avant-Garde', and 'Dadaist' Movements.)

Jean Maurice Eugene Clement Cocteau was a Parisian writer, artist, poet, playwright and film maker belonging to a wealthy and prominent family of France in the 19th century. His most famous play is The Infernal Machine. He has given to the world of literature one of the best novella, Les Enfants Terribles. His is known for his cinematic articulation with movies like Blood of a Poet, Les Parents terrible, Beauty and the Beast, Orpheus and La Testament d’Orphee. Jean Cocteau was always inclined towards the artistic side of life due to the creative influence of his father and grandfather. He started sketching from a very young age. But with his father’s untimely and mysterious death, Cocteau became more of a nervous young adult than he already was. He made many influential friends in life, like Proust, Hugo, Picasso, Chanel, Piaf, Satie, etc., all of them influenced him greatly in his life as well as creatively. Cocteau was open about his sexuality and was openly in a long term relationship with the French actor, Jean Marais, who also acted in several of his movies and was his muse. Antonin Artaud
DID WE MISS SOMEONE?
CLICK HERE AND TELL US
WE'LL MAKE SURE
THEY'RE HERE A.S.A.P
Quick Facts

French Celebrities
Novelists
Playwrights
French Men
Male Poets
Childhood & Early Life
Jean Cocteau was born on 5th July 1889 in Maisons-Laffitte, Yvelines, in a village near Paris, in a socially prominent Parisian family, to Georges Cocteau and Eugenie Lecomte. He had other two siblings, Marthe and Paul.
His family lived in their maternal grandparents’ house in Paris during the winters and in Maisons-Laffitte during the summers. He was known to have been a pampered but a nervous child, and he was often ill.
The place where he was growing up was popular for its taste in art and culture. From an early age Cocteau started to draw. His grandfather was also an art lover and had a great collection of music. He used to hold music sessions in the house. In his early childhood Cocteau attended many stage performances for children.
In 1898, when he was only 9 years old, Cocteau’s father, who was a lawyer, committed suicide. This made a huge impact on the mind of young Jean and the actual reason for his father’s suicide was never really known. Jean was looked after by his mother and grandfather after this incident.
In 1904, he was expelled from the school at Easter due to his constant absence and he finished his academics by taking lessons at home. By this time he started to draw profusely. 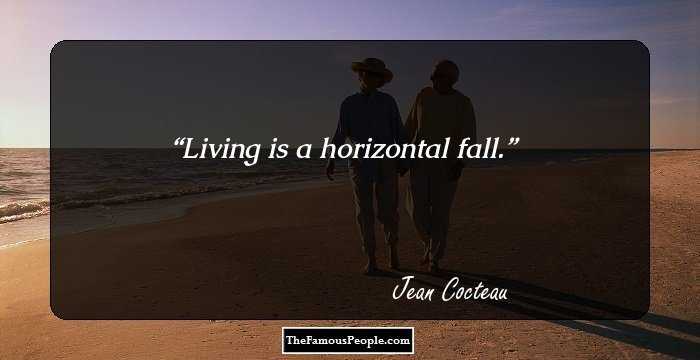 Quotes: Living
Continue Reading Below
Career
In 1909, Cocteau started to work for the magazine ‘Scheherazade’ with Maurice Rostand. He worked on the next six issues of the magazine until 1911. During this time, he was also contributing articles and his drawings to ‘Comoedia’. In the same year the first anthology of his poems ‘La Lampe d’Aladin (Aladdin’s Lamp) was published. He also drew a caricature of the Parisian actress Madeleine Carlier, whom he later on introduced to everyone as his fianc�, during this time.
In 1910, his second anthology of verses ‘Le Prince frivole (The Frivolous Prince)’ was published. He also wrote ‘La Patience de Penelope, de Penelope, mensonge en un acte (The Patience of Penelope, a lie in one act) along with Andre Paysan, his colleague from ‘Scheherazade’. During this time many articles and drawings by Cocteau were published in ‘Comoedia’.
In 1911, he continued to write for ‘Comoedia’, ‘Comoedia illustre’ and ‘Les Humoristes’. He also wrote a libretto for a ballet ‘Le Dieu bleu (Blue God)’ and designed two paybills for ‘Le Spectre de la rose’. This was the time when he penned down ‘Ballet Russe’ for the troupe’s programme.
In 1912, His third book of verse ‘La Danse de Sophole (The Dance of Sophocles)’ was published. This book did not do very well and with failure of his ballet, Cocteau started questioning his talent and early successes. During this time, some of his poems and prose appeared in ‘Comoedia’. ‘Le Figaro’, ‘La Revue de Paris’, ‘Je sais tout’ and ‘Les Annales’.
In 1913, Cocteau started to work on ‘Le Potomak’ and sketched his first Eugenes. His article on ‘Swann’s Way’, written on the prompting of Proust, was published in Excelsior. In 1914, he finished ‘Le Potomak’ in Paris. This was the time when the war broke out and he showed interest in joining it but he was too unfit for it. This was the year when he prepared the journal ‘Le Mot’ with Paul Iribe.
In 1918, Cocteau’s important works like ‘Orphee’ and ‘Les Enfants terribles’ were staged. This was also the year when he formed a very close friendship with a 15 year old novelist Raymond Radiguet. Radiguet became a great influence on Cocteau’s art and life. This young writer later died from typhoid in 1923.
In 1930, ‘Blood of a Poet’ was released, which was Cocteau’s first feature film. It was an artistic commentary on his private mythology. This was the year when he wrote the greatest play of his life ‘La Machine Infernal’. This play was based on ‘Oedipus’. He also wrote plays like ‘La voix humaine (The Human Voice), ‘Les chevaliers de la table rounde (The Knights of the Round Table)’, ‘Les parents terrible (Intimate Relations)’, ‘La machine a ecrire (The Typewriter).
After 1930 Cocteau did not work for next 15 years because of his addiction to opium. He returned to work in 1945 when his close friend and actor Jean Marais prompted him to. He directed the adaptation of his play ‘La Belle et la Bete (Beauty and the Beast). Marais himself acted in the movie and this movie marked a glorious return of Cocteau to the world cinema.
In 1950, he again directed a film called ‘orpheus’, starring Marais. This movie was based on the life of a poet who is plagued by artistic and romantic opponents and when his wife dies then he goes to hell to bring her back. This was also the year when Cocteau decorated the Villa Santo Sospir in Saint-Jean-Cap-Ferrat and started a series of graphic works.
In 1951, Cocteau recorded a series of radio interviews with Andre Fraigneau, which included ‘Entretiens autour du cinematographe. These interviews were interlocutions on cinema. In this year he was also elected as the president of the Union of Authors and Composers. He started a new journal called ‘Le Passe define (Past Tense)’.
In 1953, an exhibition of his paintings and drawings took place at the galerie des Ponchettes in Nice. He also took the responsibility to be one of the juries at the Cannes Film Festival. He started working on the collection of poems called ‘Clairobscur (Twilight)’ during the same year.
In 1956, he went to Brussels for the production of ‘La Machine a ecrire (The Typewriter)’. It was later performed at the Comedie-Francaise. His new anthology, Poemes 1916-1955, was published. This was the time when ‘Images de Jean Cocteau’ was exhibited at the Galerie Henri Matarasso in Nice.
In 1959, ‘Poesie critique I (Critical Poetry I)’ and ‘Gondole des morts (Gondola of the Dead)’ were published. This was the year when he began the shooting for his film called ‘Testament d’Orphee (Testament of Orpheus)’ in Les Baux-de-Provence in Nice.
In 1961, Cocteau wrote script for ‘Le Princesse de Cleves (Princess of Cleves)’ which was directed by Jean Delannoy. He also started ‘Innamorati’, a series of sketches in colored pencil. ‘Le Ceremonial espagnol du phenix (The Spanish Ceremonial of the Phoenix) and La Partie d’echecs (The Chess Game) was published. 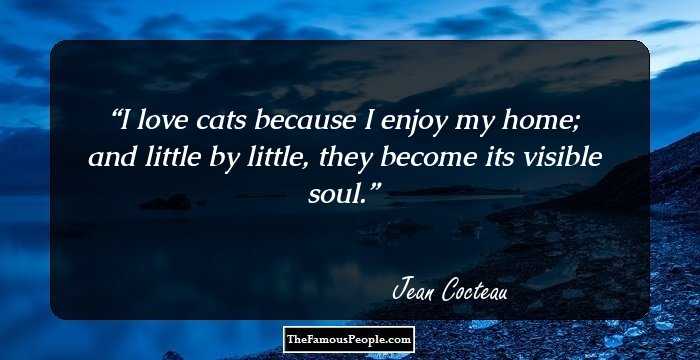 Quotes: Love, Soul, I
Personal Life & Legacy
Cocteau was a bisexual and he was quite open about it. For many years he was in a sexual and romantic relationship with his muse, actor Jean Marais. He was in friendly and romantic relationship with many well-known personalities of his time like: Coco Chanel, Edith Piaf, Pablo Picasso, Jean Hugo, Marlene Dietrich, Erik Satie, Henri Bernstein, Kenneth Anger, Igor Stravinsky, Yul Brynner, etc.
He died of heart attack at the age of 74 on October 11, 1963. He was at his Chateau in Milly-la-Foret, France at the time of his death.
Recommended Lists:
Writers #376
Critics & Connoisseurs #18

Quotes By Jean Cocteau | Quote Of The Day | Top 100 Quotes

See the events in life of Jean Cocteau in Chronological Order