Nancy Witcher Astor (Viscountess Astor), famously known as Lady Astor, was the first woman to take seat as a Member of Parliament in the British House of Commons. She belonged to a family of ex-slave owners in Virginia, United States, and was raised in an upper-class environment. Her unfortunate and disastrous first marriage to a drunken army commander led her to English countryside in search of peace and direction. After this she soon became famous in the elite class for her intelligence, wit and charm. It was her second marriage to the Viscount Astor that gave her an opportunity to contest in the Westminster Parliament. Although her lack of political background, elite upbringing up and a strong Christian Science views were held against her during the elections, she still managed to win the seat in 1919, courtesy her incredible work for soldiers during WWI and the money she could afford to spend on campaigning. In her newly found political position, Lady Astor effectively introduced the Intoxicating Liquor (Sale to Persons under 18) raising the legal age for consuming alcohol in public from 14 to 18. She always had a controversial public image, which eventually worked against her, for she was publically expressive about her anti-Semitic views, sympathy for the Nazis, anti-catholic ideas and disregard for the minorities. Theresa May
Political Leaders #561
Leaders #765
DID WE MISS SOMEONE?
CLICK HERE AND TELL US
WE'LL MAKE SURE
THEY'RE HERE A.S.A.P
Quick Facts

American Celebrities
British Celebrities
American Women
British Women
Taurus Leaders
Women Leaders
Childhood & Early Life
Nancy Astor was born at the Langhorne House in Danville, Virginia, to Chiswell Dabney Langhorne and Nancy Witcher Keene. Her father was an auctioneer and a rail contractor.
When Astor was born, the Astor family was going through financial crisis but by the time she was a teenager, the family regained its wealth and they moved to an estate, known as Mirador, in Albemarle County, Virginia.
Astor went to a finishing school in New York with her sister Irene. She got married at the age of 18 but unfortunately the marriage did not work out, which compelled Astor to move to England. 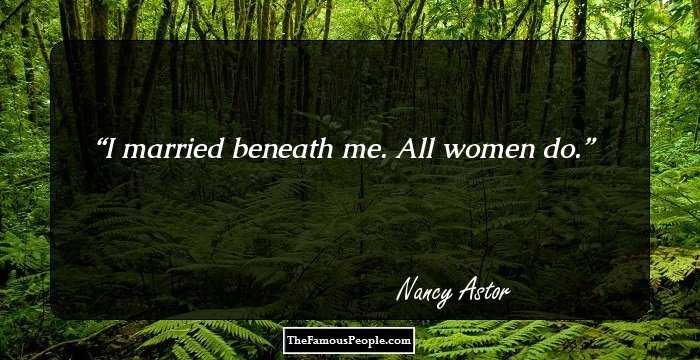 Quotes: Me, Women, I
Continue Reading Below
You May Like

Who Is The Most Popular BTS Member?
Career
Astor found her relocation to England in 1905 comforting and became socially famous among the elites for her queer combination of wit and restraint. She got married again and started living in Buckinghamshire on the River Thames.
She became a part of a small political circle called Milner's Kindergarten, a group that promoted equality among English-speaking people and extension of British imperialism. She also increasingly became a devout to Christian Science.
Being a Christian Science follower, she participated in World War I, by being there for those who needed non-medical assistance. With her newly found spiritual beliefs and compassion, Astor became famous amongst soldiers.
After Waldorf inherited the title of viscount in 1919, she became a viscountess. She decided to campaign to take over her husband's seat in the House of Commons. It was a difficult task as Astor had no proper political background.
Her upper-class status was held against her during the campaign and she was continuously pulled down publically. But with her personality and work that she did during WWI, she was elected to the Westminster Parliament in 1919.
During the 1920s Astor made numerous effective speeches and introduced the Intoxicating Liquor (Sale to Persons under 18) Bill (nicknamed 'Lady Astor’s Bill') raising the legal age for consuming alcohol in a public house from 14 to 18.
She worked towards bringing more women into the civil service and the police force, worked towards education reforms, and financed many charitable organizations. She was particularly famous for supporting nursery schools.
By the 1930s, Astor started to lose her popularity because of various incidents, like the arrest of her son Bobbie for homosexual offences and her friendship with the controversial writer George Bernard Shaw. She remained unmindful of her mounting disapproval.
Her views on Nazism were further lowered her popularity. She was seen as a supporter of fascism and a political figure with anti-Semitic ideas. She and her husband were strong supporters of the British appeasement policy.
Continue Reading Below
The Tories thought of her as a liability in the final years of World War II, and her husband told her that if she ran for office again the family would not support her, which is why she retired in 1945. 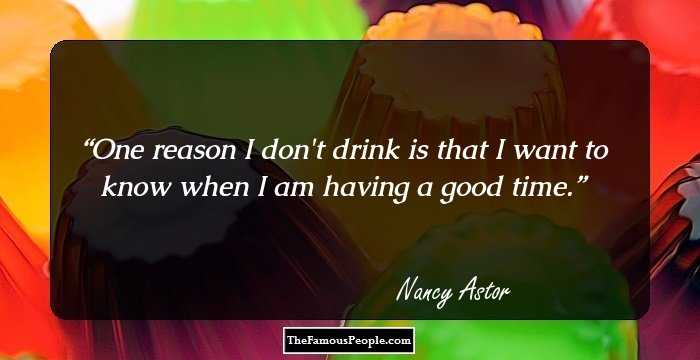 Quotes: Time, I
Major Works
As a Member of Parliament, Lady Astor brought a number of reforms. In the 1920s, she introduced the Intoxicating Liquor Bill raising the legal age for consuming alcohol in public from 14 to 18.
Awards & Achievements
In 1959, she was honored with the Freedom of City of Plymouth. 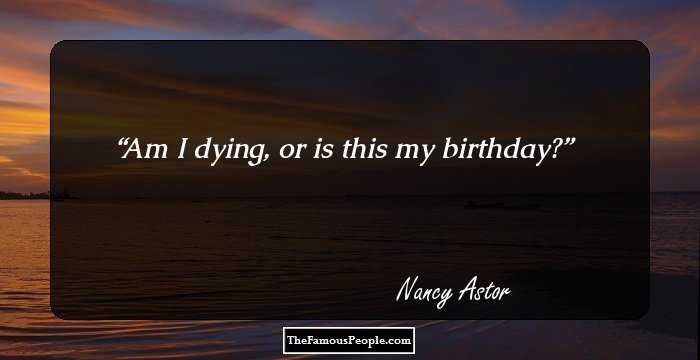 Quotes: I
Personal Life & Legacy
Astor was married to Robert Gould Shaw II, commander of the all-black 54th Massachusetts Volunteer Infantry, in 1897. The couple had a son together: Robert Gould Shaw III but the marriage ended in divorce.
She got married again to Waldorf Astor, 2nd Viscount Astor, an American born English politician and newspaper proprietor, in 1906. The couple had 5 children: William Astor, Nancy Phyllis Louise, Francis David Langhorne, Michael Langhorne and John Jacob.
She died in 1964 at her daughter's home at Grimsthorpe Castle in Lincolnshire. She was cremated and her ashes interred at the Octagon Temple at Cliveden.
Trivia
She lived her final years in loneliness.
Astor’s son Bobbie committed suicide after her death and Jakie married a famous Catholic woman, against her wishes, and her other children became alienated from her towards the end of her life.
During one of her US tours she told a group of African-American students that they should aim to be like the black servants she had during her youth.
She publicly blamed her husband for forcing her to retire from parliament.
In Rhodesia, she arrogantly told the white minority government leaders that she was the daughter of a slave owner.
Astor once got into a fight with her husband over chocolates and soon after he had a heart attack. After this, their marriage grew cold.
You May Like

Quotes By Nancy Astor | Quote Of The Day | Top 100 Quotes

See the events in life of Nancy Astor in Chronological Order