Legendary Russian revolutionary, anarchist and prolific political writer, Mikhail Bakunin was one of the most powerful propagators of anarchism in the 19th century. As a proponent of the ‘Theory of Collective Anarchism’, his ideas continue to influence contemporary labour movements, left-wing movements and other present-day social movements, including anti-globalisation campaigns. He was politically active during a turbulent period in European history and laid down the foundations for the international anarchist movement through his powerful writings. His works dealt with the social and political principles of anarchism. The founder of the semi-secret organisation ‘International Brotherhood’, Bakunin garnered immense support from Sweden, Norway, Denmark, Belgium, England, France, and Spain. His ideologies have been an inspiration to many modern writers and freedom fighters including Bhagat Singh. His life is an example of ruthless struggle - he was imprisoned for many years and was exiled after he liberated the working class from the powerful talons of state oppression. Interestingly, he did not receive any recognition for his philosophies and efforts during his lifetime. Russian People
Swiss People
Philosophers
Revolutionaries
Russian Men
Swiss Men
Childhood & Early Life
Mikhail Bakunin was born in a humble family in the village of Pryamukhino, Moscow and was the eldest of nine siblings.
He received military training at the age of fourteen at the Artillery School in Saint Petersburg, before which he was home-schooled.
In 1832, he served as a junior officer in the Russian Imperial Guard for a brief period. Soon, he abandoned both military and civil service, to study philosophy. 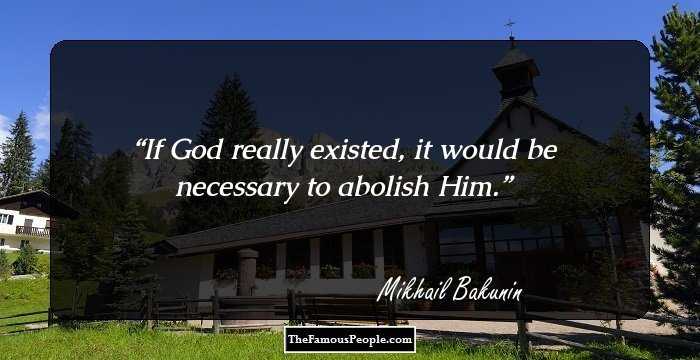 The Sexiest Men Of 2020, Ranked
Career
In 1835, he travelled to Moscow to study philosophy and the following year he translated German philosopher Johann Fichte’s works - ‘Some Lectures Concerning the Scholar's Vocation’ and ‘The Way to a Blessed Life’.
In 1840, he moved to Berlin after getting a teaching offer in the department of philosophy. Here, he became part of the German intellectual group ‘Young Hegelians’ and also became a supporter of the socialist movement in Berlin.
In 1842, he authored the well-known essay, ‘The Reaction in Germany-A Fragment by a Frenchman’, which put forth the ideas of the prevalent social and political revolution.
In 1844, as a consequence of his strong socialistic ideals, the Russian government stripped off his status of a noble, curbed his privileges and confiscated his property, after which he was banished to Siberia.
On November 29, 1847, he gave a political speech that supported the Polish Independence movement. As a result, he was forced to leave France on the order of the Russian Ambassador and soon, shifted to Brussels.
During his stay in Berlin, his interest in socialism grew deeper and he abandoned his academic career and became part of the revolutionary, socialistic movement.
In 1848, he authored ‘Appeal to the Slavs’, a proposal to overthrow the European autocracies.
Following his participation in the ‘Czech rebellion of 1848’, a series of political upheavals throughout Europe, he was arrested in Dresden, Germany. He was imprisoned in the Peter-Paul Fortress, Saint Petersburg, where he remained until 1857. Following his imprisonment, he was ordered to work in Siberia.
In 1859, he moved to Eastern Siberia along with his wife, to work at the Amur Development Agency.
Continue Reading Below
In 1861, he escaped from Siberia via sea route in an American ship ‘SS Vickery’ and reached Yokohama, Japan. Here, he met fellow revolutionaries, Wilhelm Heine and Philipp Franz von Siebold.
He left Japan and sailed on ‘SS Carrington’ to San Francisco, where he met members of the ‘Forty-Eighters’, veterans of the 1848 revolutions in Europe.
He re-entered Western Europe and partook in the Polish revolutionary movement, after which he sailed across the Baltic in the ‘SS Ward Jackson’ to be a part of the Polish insurrection. Sadly, he failed to reach his destination and planned to travel to Italy instead.
In 1863, he began his journey to Italy and reached his destination on January 11, 1864. It was here, he began to develop his ideas on anarchy.
In Italy, he founded the ‘International Brotherhood’, an underground association of revolutionaries that carried out propaganda for which he recruited Italians, Frenchmen, Scandinavians and Slavs.
He began expanding his association, the ‘International Brotherhood’ to other countries and had members in Sweden, Norway, Denmark, Belgium, England, France, Spain, and Italy, apart from Polish and Russian members.
From 1867 to 1868, he became a prominent member of the ‘League of Peace and Freedom’, the Inaugural congress of the bourgeois-pacifist and also authored the essay ‘Federalism, Socialism, and Anti-Theologism’.
In 1868, he became a member of the ‘First International’, an association of the working class and remained associated with it until he was expelled by Karl Marx, the revolutionary socialist.
From 1869 to 1870, he became involved in the Russian Revolutionary projects along with Sergey Nechayev, a Russian revolutionary. 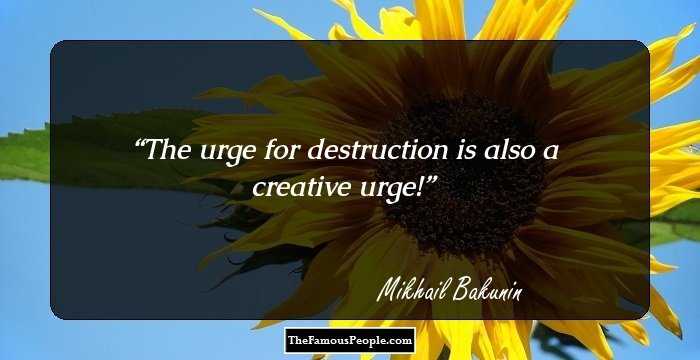 Major Works
Published in 1873, ‘Statism and Anarchy’ was one of his seminal works written in Russian that helped pave the foundation of the Russian anarchist movement. In Switzerland alone, over 1200 copies were sold in the first week of its release.
He is the founder of the ‘Theory of Collective Anarchism’, also known as ‘anarcho-collectivism’, a doctrine that advocates the abolition of state and private ownership of the means of production. This theory has inspired many people including, Noam Chomsky, an American writer and activist and Bhagat Singh.
Personal Life & Legacy
In 1857, he married Antonia Kwiatkowska, the daughter of a Polish merchant.
He died at the age of 62 in Bern, Switzerland and is interred at Bremgarten cemetery, Bern, Switzerland. 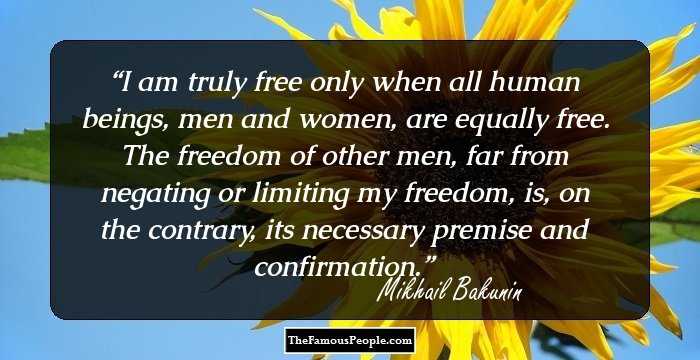 Quotes: Women, I
Recommended Lists:
Leaders #904
You May Like

Quotes By Mikhail Bakunin | Quote Of The Day | Top 100 Quotes

See the events in life of Mikhail Bakunin in Chronological Order