(Modern Dancer and Choreographer Known for Her 'Graham Technique' Style)

The first ever dancer to perform at the White House, American dancer Martha Graham was an artist beyond compare. In a career spanning over half a century, she revolutionized modern dance and created more than 180 works as a dancer and choreographer. She believed in revealing the inner man and saw the art of dance as a medium for the expression of intense human emotions. Her influence on modern dance has often been compared with the influence Picasso had on the modern visual arts and Stravinsky had on music. A highly creative person, she saw dance as a “movement language” that allowed human beings to artistically express their inner most desires, fears, and ecstasies. As an artist, she collaborated with not just other dancers, but also with painters, designers and musicians to produce works of art that were as aesthetically appealing as they were profoundly touching. Through her experimentation with social, political and psychological themes, she influenced generations of choreographers and dancers including Merce Cunningham, Paul Taylor, and Twyla Tharp. She founded the Martha Graham Dance Company, which is today the oldest American dance company; the company served as the launch pad for many of the great 20th and 21st century modern dancers and choreographers. Paula Abdul
DID WE MISS SOMEONE?
CLICK HERE AND TELL US
WE'LL MAKE SURE
THEY'RE HERE A.S.A.P
Quick Facts

Martha Graham was born on May 11, 1894, as one of the three daughters of George Graham, a physician, and his wife Jane Beers, in a suburb of Pittsburg, Pennsylvania. Her father was a doctor ad practiced psychiatry.

She joined the Denishawn School of Dancing and Related Arts, founded by Ruth St. Denis and Ted Shawn, in the mid-1910s. The newly established school explored different types of dance styles including folk, classical, experimental, Oriental, and American Indian, thus introducing her to the rich cultural heritage of dances from around the world. She studied here till 1923.
Ted Shawn, who was her mentor at the school recognized her potential and guided her to perform an Aztec ballet, ‘Xochitl’. Her performances at various concerts and vaudeville were met with great success.

Martha Graham performed an Egyptian dance with Lillian Powell—again under Shawn’s guidance—in a short silent film by Hugo Riesenfeld, in 1922. 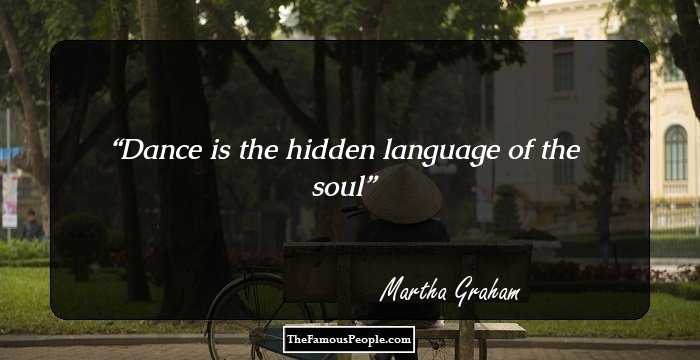 Martha Graham left Denishawn in 1923 and became a featured dancer in the Greenwich Village Follies revue. She went to the Eastman School of Music in Rochester, New York in 1924 where she taught dance.

She made her debut as an independent artist in New York, in 1926. She loved experimenting with dance movements and this was reflected in her performances. Some of the performances she gave during this time were ‘Three Gopi Maidens’ and ‘Danse Languide’.

She founded the Martha Graham Dance Company in 1926, as a contemporary dance company. The company went on to become a very famous institution for dancers and choreographers.

In 1927, Martha Graham performed a program, Revolt, set to the avant-garde music of Arthur Honegger. This was an original dance that was considerably different from her previous works and was not received positively by the audiences. But this did not dampen her imaginative spirit.

Over a period of time her genius mind and creativity began attracting the attention of critics and by the time she choreographed ‘American Document’ in 1938, her fame as an innovative choreographer had spread far and wide.
She believed dance to be a powerful medium of expression and explored several social, political, psychological and sexual themes through her performances and choreography.
Her works in the 1940s reflected her views about the human society and its complexities. Some of her best known works from this period include ‘Deaths and Entrances’ (1943), ‘Appalachian Spring’ (1944), ‘Dark Meadow’ (1946), and ‘Errand into the Maze’ (1947).
The Martha Graham Company premiered the ballet ‘Clytemnestra’ in April 1958 which went on to become a roaring success. It was her largest scale of work and the only full-length work she ever produced.
Some of her later works are ‘The Witch of Endor’ (1965), ‘Cortege of Eagles’ (1967), ‘The Archaic Hours’ (1969), ‘Mendicants of Evening’ (1973), ‘Lucifer’ (1975), ‘The Owl and the Pussycat’ (1978), and ‘Frescoes’ (1980).
Continue Reading Below 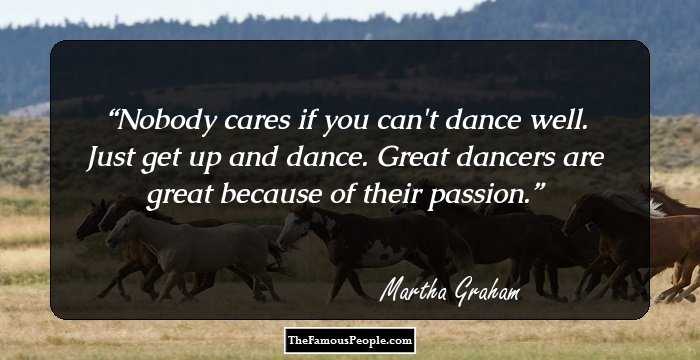 Quotes: You
Major Works
She founded the Martha Graham Dance Company which is today the oldest continually performing dance company in the world. The company has till date trained many world famous dancers and choreographers and has been recognized as "one of the seven wonders of the artistic universe" by the Washington Post.
Awards & Achievements
In 1976, she was awarded the Presidential Medal of Freedom, the highest civilian award of the USA, in 1976 by President Gerald Ford who declared her "a national treasure”.

Martha Graham was inducted into the National Museum of Dance's Mr. & Mrs. Cornelius Vanderbilt Whitney Hall of Fame, in 1987. 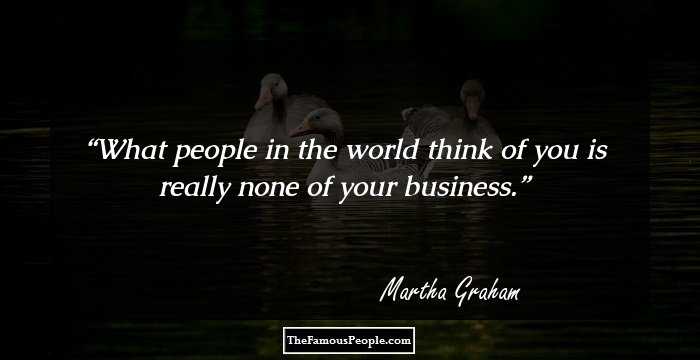 A dancer named Eric Hawkins joined her troupe in 1939 and played the male lead in many of her works. Eventually the two developed a relationship and got married in 1948. They, however, separated in 1954.

She became addicted to alcohol at one point of time following her last performance as a dancer. She became so depressed that she even tried to commit suicide. However, she bounced back by quitting alcohol and revived her career as a choreographer.
She lived a long life and continued choreographing till the very end. She died of pneumonia on April 1, 1991, at the age of 96.
Recommended Lists:
Dancers #62

Quotes By Martha Graham | Quote Of The Day | Top 100 Quotes

See the events in life of Martha Graham in Chronological Order 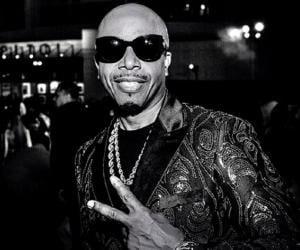