(The Greatest Dancer in Film History)

Frederick Austerlitz was an American dancer, choreographer, singer, musician and actor who gained stardom and prominence under the stage name Fred Astaire. He is regarded as one of the best, if not the best, dancers of all time who found admirers in legends like Gene Kelly, George Balanchine, Mikhail Baryshnikov, Margot Fonteyn, Bon Fosse, Gregory Hines, Michael Jackson and many others. His expertise came from the fact that he could portray any emotion through his dance and his acute sense of rhythm and technical control were awe-inspiring. He could blend elegance, grace, originality and precision so easily that it looked impossible to be done in one take. While performing, he mixed elements of tapping, classical and the elevated style of Vernon and Irene Castle dancing and called it his 'outlaw style'. His dance influenced the American Smooth style of ballroom dancing and set new parameters for musical films throughout the world. He was also a fashion icon, something which helped him conquer even more fans and lovers across the world. Another talent that is mentioned every time his name comes up is his singing ability. His light-tone voice coupled with prepossessing lyrics and insightful phrasing, led many critics to rate him amongst the finest performers American Celebrities
Singers
Choreographers
American Men
Nebraska Actors
Childhood & Early Life
Fred Astaire was born on May 10, 1899 in Omaha, Nebraska, US. His father Fredric 'Fritz' Austerlitz was a brewer at the Storz Brewing Company and his mother was Johanna Ann. Fred's elder sister's name was Adele.
Adele was an instinctive dancer and singer. She paired up with Fred to perform brother and sister acts - his durability and her talent being their collective strength.
The family shifted to New York City in 1905 to launch the children's show business career and their surnames were changed to Astaire. They were trained at the Alviene Master School of the Theatre and Academy of Cultural Arts. 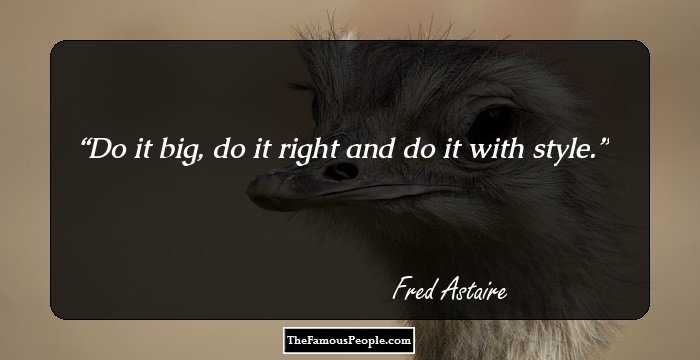 Continue Reading Below
Career
The duo debuted in New Jersey with the act called 'Juvenile Artists Presenting an Electric Musical Toe-Dancing Novelty'. The performance received appreciation in the local papers.
They gained more fame after performing at the Orpheum Circuit and a couple of other locations in the US. Thereafter, they had to go on a two year break to avoid child labour laws.
Adele's marriage (1932) to Lord Charles Arthur Francis Cavendish broke up the duo and Fred was left traumatised. But this turned out to be a blessing in disguise as he now expanded his range and could also create romantic acts as well.
His first audition was for RKO Radio pictures, which was unsuccessful. His Hollywood debut was in the MGM-produced film 'Dancing Lady'(1933) starring Joan Crawford.
He returned to RKO in the film 'Flying Down to Rio' (1933). He was paired with Ginger Rogers for the first time in this film, and in spite of being a part of the supporting cast, the couple stole the show. Fred Astaire and Ginger Rogers became a very popular on-screen pair following this.
Fred Astaire made two innovations in his musicals. First he insisted that the camera should film the entire dance routine in a single shot, with dancers always in full view. And second, he tried to integrate the dance routines into the plotlines of the film instead of using dance as a spectacle.
He starred with Rita Hayworth, the daughter of his vaudeville dance idols, the Cansinos, in two films, 'You'll Never Get Rich' (1941) and 'You Were Never Lovelier'(1942).
After the debacle of the Vincente Minelli directed film 'Yolanda and the Thief' (1945), Fred Astaire became insecure and announced his retirement. He now focused his interest in horse-racing and founded the Fred Astaire Dance Studio in 1947.
He returned to Hollywood as a replacement for Kelly in the film 'Easter Parade'(1948) and then appeared in the film 'The Barkleys of Broadway'(1949), where he paired up with Rogers for the last time.
Continue Reading Below
Fred Astaire shut the project 'Daddy Long Legs' (1955) midway due to his wife’s death. But the film's composer and studio executives convinced him that working was the best remedy to overcome grief. The film turned out to be a moderate hit.
The film 'Funny Face' (1957), a Paramount production and 'Silk Stockings' (1957), a MGM production failed to rally their production costs and subsequently he disengaged from motion pictures.
The film 'Finian's Rainbow'(1968) directed by Francis Ford Coppola was his last major musical film. He featured alongside Petula Clark and the film failed to make its mark at the box-office.
In 1975, he launched three albums, 'Attitude Dancing', 'They Can't Take These Away From Me' and 'A Couple of Song and Dance Men' in London.
He featured in a supporting role in the cult movie 'The Amazing Dobermans' (1976), in a French film 'The Purple Taxi' (1977) and in the television film, ‘A Family Upside Down' (1978). He also made a guest appearance in the TV-series 'Battlestar Galactica'(1979), on account of his grandchildren's interest in the series. 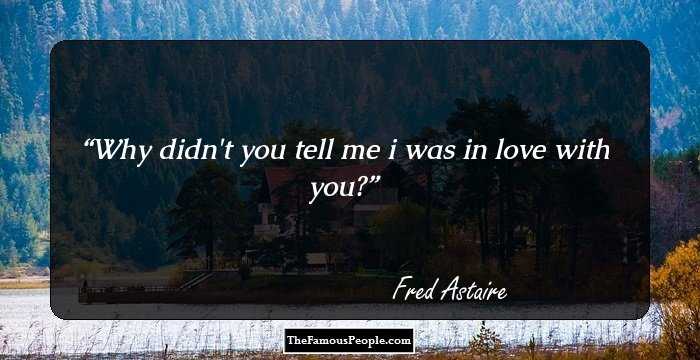 Quotes: You, Me, Love, I
Major Works
His 1958 musical special 'An Evening with Fred Astaire' won nine Emmy Awards, including the ones for 'Best Single Performer by an Actor' and 'Most Outstanding Single Program of the Year'.
Awards & Achievements
Fred Astaire was presented with an honorary Academy Award “for his unique artistry and his contributions to the technique of musical pictures" in 1950.
He was the recipient of several Golden Globe Awards including the ‘Best Motion Picture Actor -Music/Comedy' for ‘Three Little Words’ in 1950 and 'Best Supporting Actor' for ‘The Towering Inferno’ in 1975.
Continue Reading Below
He was inducted into the Hall of Fame of the International Best Dressed List, the American Theatre Hall of Fame and the National Museum of Dance's Mr & Mrs Cornelius Vanderbilt Whitney Hall of Fame.
He received the Grammy Lifetime Achievement Award and a Grammy Hall of Fame Award posthumously. He was also inducted into the Television Hall of Fame and the Ballroom Dancer's Hall of Fame.
In 1981, he received a Lifetime Achievement Award from the American Film Institute. 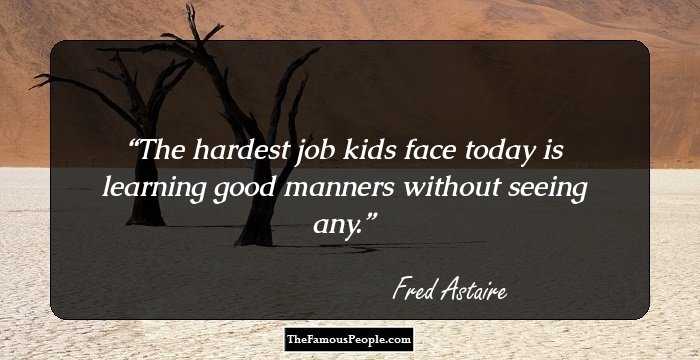 Quotes: Learning
Personal Life & Legacy
Fred Astaire married New York socialite Phyllis Potter in 1933. His mother and sister were against this relationship, yet he vehemently pursued Phyllis for two years before she finally said yes. They had two children, Fred Jr and Ava. Phyllis died of lung cancer in 1954.
His second marriage on June 24, 1980 was to a jockey named Robyn Smith who was 45 years younger than him.
He, accompanied by Bing Crosby, George Murphy, Ginger Rogers and some others founded the Hollywood Republican Committee.
Fred Astaire died at the age of 88 due to pneumonia on June 22, 1987.
Trivia
Before dying this great coreographer said - "I didn't want to leave this world without knowing who my descendant was, thank you Michael" - referring to Michael Jackson.

Quotes By Fred Astaire | Quote Of The Day | Top 100 Quotes

See the events in life of Fred Astaire in Chronological Order