Joseph Eugene Stiglitz is a noted American economist, who won the Nobel Memorial Prize in Economic Sciences for his work on asymmetric information. He had his early education under the public school system in his hometown Gary, Indiana. Later he earned his bachelor degree from Amherst College and his PhD from MIT. Thereafter, he worked with many noted economists on both sides of the Atlantic and taught at MIT, Yale, Stanford, Oxford, and Princeton before joining Columbia University, of which he is still a faculty member. Noted for his works on microeconomics, he has also contributed significantly to policy matters. For four years, he served in the Council of Economic Advisers under President Bill Clinton’s government and later occupied the post of Senior Vice President and Chief Economist, World Bank. More recently, he was an advisor to Barack Obama; but was sharply critical of his administration’s financial-industry rescue plan. He is also a prolific writer and along with his publishing over 300 technical articles, he has also written a number of books on various economic issues. Shonda Rhimes
Economists #33
Writers #778
Intellectuals & Academics #262
DID WE MISS SOMEONE?
CLICK HERE AND TELL US
WE'LL MAKE SURE
THEY'RE HERE A.S.A.P
Quick Facts

American People
Economists
American Men
Amherst College
Massachusetts Institute Of Technology (MIT)
Childhood & Early Life
Joseph Eugene Stiglitz was born February 9, 1943 in Gary, Indiana. His father, Nathaniel David Stiglitz, was an insurance salesman and a Jeffersonian democrat, while his mother Charlotte (née Fishman) was a schoolteacher and came from a family of New Deal democrats.
Consequently, during Joseph’s growing up years, intense political debate was part of their family life. This might have given rise to his interest in politics, which was further nurtured during his college days.
Nathaniel Stiglitz had great influence on young Joseph. He often spoke about the virtues of self-reliance and was a strong advocate of civil rights. He had a very deep sense of moral responsibility and insisted on paying social security contribution for domestic helps, even though they never asked for it.
Joseph Stiglitz had his schooling under the public education system in Gary. Classes were quite large there; in spite of that, his teachers managed to provide individual attention. Here, apart from studying usual curricula, Stiglitz had to learn printing and electrical work.
During these days, he keenly took part in school debates. Every year a national topic was chosen and they were randomly assigned to one side or other. Taking part in such debates, he realized, early in his life, that each issue can have multiple sides.
In 1960, after passing out from school, he followed his brother to Amherst College. It offered a broad education and there he studied, apart from physics, in which he majored three years later, a little bit of mathematics, history, economics, philosophy, biology, chemistry and English.
The teachers also had a unique teaching style. They asked questions and responded to each answer with further questions. Soon he realized that if one could ask the right question, it was not really difficult to find the right answer.
Among all the subjects taught at Amherst College, young Stiglitz was irresistibly drawn to economics. Therefore after he had majored in physics in 1964, he decided to major in economics. When he told his teachers, they advised him to go to a graduate school.
Subsequently he entered the Massachusetts Institute of Technology as an undergraduate student on partial scholarship. He spent two years at MIT, imbibing much from its excellent academic environment. His aim was to learn, not just to earn degrees. 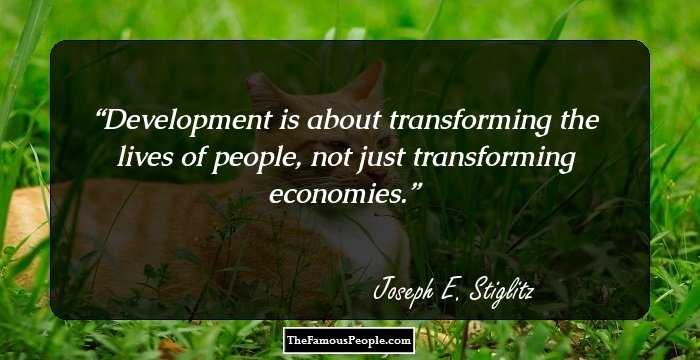 The Best Black Actresses Of All Time
Research Scholar
In 1965, Joseph Stiglitz moved to the University of Chicago to do research under Hirofumi Uzawa, a Japanese economist, known for his growth theory of neoclassical economics.
Later in the same year, he received a Fulbright Scholarship for Cambridge for the academic session of 1965-1966. He took it mainly because he wanted to come across as many views as he could.
Therefore, he joined Fitzwilliam College, Cambridge and began working on various projects, first under Joan Robinson and then under Frank Hahn. His research in this period centered on growth, technical change, and income distribution. 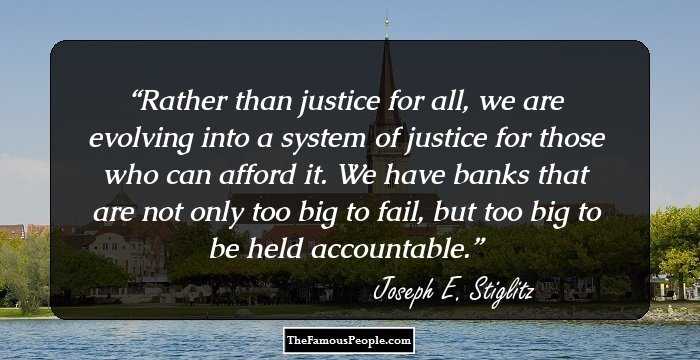 Academic Career
In 1966, Joseph Stiglitz returned to the U.S.A and took up a one-year appointment as an Assistant Professor at MIT. Concurrently, he started working for his PHD with Robert Merton Solow and earned his degree in 1967.
Thereafter in 1967, he joined Cowles Foundation for Research in Economics, Yale University as an Assistant Professor. In 1968, he was promoted to the post of Associate Professor, a position he held until 1970.
Meanwhile in 1966, he received a Tapp Junior Research Fellowship at Gonville and Caius College, University of Cambridge. Therefore, from then until 1970, he had to commute to and from Cambridge regularly.
In 1970, Stiglitz was promoted once more. He now became Professor of Economics at the Cowles Foundation and Department of Economics, Yale University, a position he held until 1974.
Concurrently, from 1969 to 1971, he was the Senior Research Fellow, Social Science Division, Institute for Development Studies, University College, Nairobi under Rockefeller Foundation Grant. From 1973 to 1974, he was a Visiting Fellow at the St. Catherine's College, Oxford.
Continue Reading Below
In 1974, he joined Stanford University as Professor of Economics, holding the position till 1976. Thereafter from 1976 to 1979, he was the Drummond Professor of Political Economy at Oxford University.
From 1979 to 1988, he served as the Professor of Economics at Princeton University. Later from 1988 to 2001, he was the Professor of Economics and Senior Fellow, Hoover Institution, Stanford University.
In 2001, Stiglitz was appointed a Professor of Economics at the Business School, the Department of Economics and the School of International and Public Affairs at the Columbia University, a position he holds till now. Along with that, he functions as the Chairperson of many important committees.
He is a Co-Chairperson of Columbia University Committee on Global Thought and Co-founder and Co-President, Initiative for Policy Dialogue. Simultaneously, he also holds the Chair of the Management Board and Director of Graduate Summer Programs, Brooks World Poverty Institute, University of Manchester.
In Political Arena
In 1993, Joseph Stiglitz was appointed a Member of the Council of Economic Advisers by President Bill Clinton. Subsequently in 1995, he was inducted as a Member of Cabinet and became the Chairman of CEA, a position he continued to hold until 1997.
Thereafter from 1997 to 2000, he was the Senior Vice President and Chief Economist, World Bank. During this period, he had a conflict with other economists over International Monetary Fund’s economic policies towards the third world countries, which called for higher taxes and tight monetary control during the recession.
In July 2000, he established ‘The Initiative for Policy Dialogue’ (IPD), a global network of more than 250 leading economists, political scientists, civil society representatives, and practitioners. Its goal was to help countries find solutions to pressing problems and strengthen their civil society.
In 2008, Stiglitz was elected Chairman, International Commission on the Measurement of Economic Performance and Social Progress, initiated by the president of France. It had its first plenary meeting in April 2008 and its final report was published on September 14, 2009.
In 2009, he was elected Chairman, Commission of Experts on Reforms of the International Monetary and Financial System, conveyed by the President of United Nations General Assembly. Thereafter in 2010, he was appointed as an advisor to the Greek government.
Continue Reading Below
Since March 2012, Professor Stiglitz is a member of the Fiscal Commission Working Group of the Government of Scotland. Then from September 2015, he has been a member of the Economic Advisory Committee of the British Labour Party. 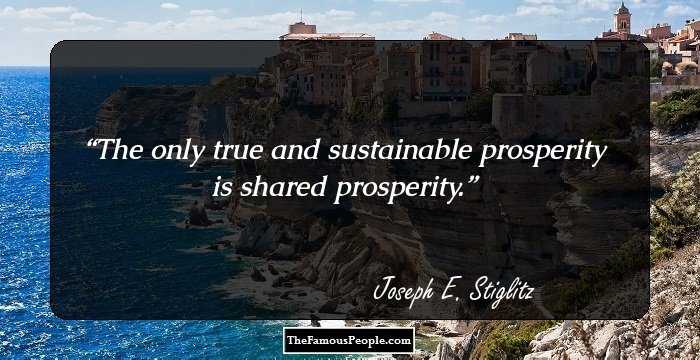 Major Works
Stiglitz is best known for his work on information asymmetry and screening. Working in the field of insurance, he showed how the use of a screening process allowed insurance companies to issue policy contracts that provide higher return at lower premiums. Later he showed how such information help to understand various market phenomena like unemployment and credit rationing.
He has also written a number of books, among which most significant are ‘The Roaring Nineties: A New History of the World’s Most Prosperous Decade’ (2003); ‘The Three Trillion Dollar War: The True Cost of the Iraq Conflict’ (2008); ‘The Price of Inequality’ (2012), and ‘Rewriting the Rules of the American Economy: An Agenda for Growth and Shared Prosperity’ (2015).
Awards & Achievements
In 1979, he received John Bates Clark Award from the American Economic Association.
In 2001, Joseph E. Stiglitz received the Sveriges Riksbank Prize in Economic Sciences in Memory of Alfred Nobel jointly with George A. Akerlof and A. Michael Spence "for their analyses of markets with asymmetric information".
In 2009, he has been elected a Foreign Member of the Royal Society (ForMemRS). In addition, he is a fellow of the National Academy of Sciences, the American Academy of Arts and Sciences, the American Philosophical Society, and the Econometric Society.
He was awarded the prestigious Loeb Prize for his contributions to journalism in 2010.
In February 2012, he was awarded the Legion of Honor, in the rank of Officer by the government of France.
In addition, he has received over 40 honorary doctorates and at least eight honorary professorships, as well as an honorary deanship.
Personal Life & Legacy
Joseph E. Stiglitz married three times. Nothing is known about his first wife or the first marriage, except that he has two children, Siobhan and Michael Stiglitz from his marriage and that it ended in a divorce.
On 23 December 1978, he married Dr. Jane Hannaway, who at that time was an assistant Professor of Administration at Teachers College of Columbia. They had two children, Edward (Jed) and Julia Stiglitz. This marriage too ended in a divorce.
On October 28, 2004 Stiglitz married Anya Schiffrin, the director of the Technology, Media, and Communications specialization at Columbia University's School of International and Public Affairs, and a lecturer at the School of International and Public Affairs.
You May Like

See the events in life of Joseph E. Stiglitz in Chronological Order