(Author of 'The Wolf of Wall Street')

Advanced Search
Jordan Ross Belfort is an American motivational speaker, author, and former stockbroker. Born in New York, Belfort was blessed with the talent of a good salesman at a very young age. He started out as a stockbroker and churned out millions of dollars through illegal ways in the 90s through ‘Stratton Oakmont,’ an investment company which he owned. Unable to withstand the pressure exerted upon him by the law-enforcement agencies, Jordan pleaded guilty for cheating several investors and other crimes related to manipulation of stock market. He also pleaded guilty for running a boiler room as part of the ‘penny stock scam.’ He spent around 22 months in prison. As part of an agreement, he gave testimony against several subordinates and partners involved in his fraud schemes. Belfort has since reformed his ways and delivers several motivational speeches. When he first started delivering speeches, the topics were mainly on ethics and motivation. However, he later shifted his focus towards entrepreneurship and sales skills. In his speeches, he emphasizes on how ethics play a crucial role in running a successful business and how to avoid mistakes that he made in his career as a broker. Rick Riordan
DID WE MISS SOMEONE?
CLICK HERE AND TELL US
WE'LL MAKE SURE
THEY'RE HERE A.S.A.P
Quick Facts

American People
Non-Fiction Writers
American Men
Male Writers
Cancer Writers
Childhood & Early Life
Jordan Belfort was born on 9 July 1962, in New York City, USA, to Max and Leah Belfort. He was raised in a modest apartment in Bayside, Queens. Both his parents were accountants by profession and were of Jewish origin.
He completed high school and went on to complete his graduation with a degree in biology from ‘The American University.’ He then took admission in ‘University of Maryland School of Dentistry.’ However, he dropped out before completing the course. 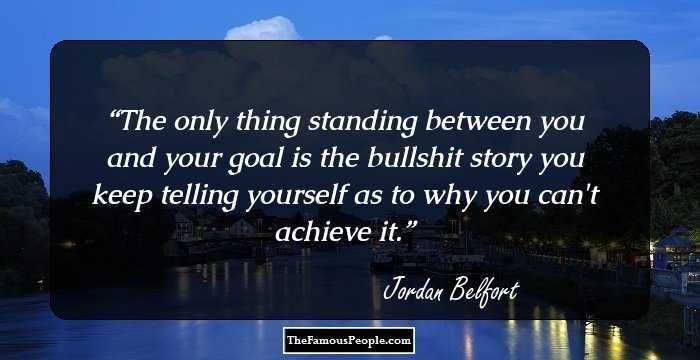 Quotes: You, Yourself
Continue Reading Below
Career
He operated a sea-food and meat business in the 80s. When the company had to be closed down, as it lost money, Belfort started selling stocks in the year 1987.
Belfort put his selling expertise to use in a different field altogether when he commenced his work in a brokerage firm in 1987. It was here where he learnt the intricacies of being a stockbroker.
Two years down the line, he started running his own investment company called ‘Stratton Oakmont.’ Jordan, along with his partner Danny Porush, became rich after using the infamous ‘pump and dump’ scheme.
As part of this scheme, his brokers were asked to force certain stocks to the firm’s unsuspecting clients that helped inflate the prices of those stocks. As part of this devious scheme, his company sold its ownership and reaped profit.
‘The United States Securities and Exchange Commission’ decided to bring an end to the devious stock operation of ‘Stratton Oakmont’ in 1992 and claimed that the company had been manipulating stock prices and defrauding investors. Just two years later, Belfort was out of his scheming brokerage business.
In the legal suit that followed, Jordan was asked by the court to pay back $110.4 million which he had swindled from several stockbrokers. While in prison, Belfort shared the cell with Tommy Chong with whom he remained friends even after his release.
Chong encouraged Belfort to pen down his experiences as a stockbroker. Belfort would go on to give credit to Chong for his present career as a motivational writer and speaker.
Jordan has been widely acknowledged as one of the finest motivational speakers. His live seminars in Australia have been widely appreciated by his audiences. He embarked on a live world tour from 2014 to 2015, lecturing on motivational topics.
His main topics at his seminars include the ‘Straight line system’ which discusses sales advices.
Continue Reading Below
In addition to conducting seminars, Belfort has also been serving as a consultant in over 50 public companies. He is also known for his writings that get featured in several major magazines and newspapers around the world.
Some of the newspapers that feature Jordan’s columns are ‘The New York Times,’ ‘The London Times,’ ‘The Los Angeles Times,’ and ‘The Herald Tribune.’ His writings have also been published in magazines like ‘Business Week’ and ‘Forbes’ among many others. 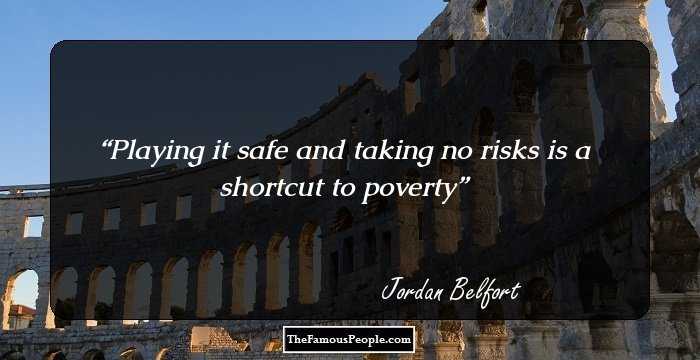 Major Works
Jordan published his international bestselling memoir ‘The Wolf of Wall Street’ in 2007. The book unfolds his triumph at the stock market and then his downfall in the world of finance.
The former stockbroker also released another memoir titled ‘Catching the Wolf of Wall Street’ which explores his life after his arrest.
Personal Life & Legacy
Belfort became wealthy after defrauding hundreds of investors and lived a lavish life, buying sports cars, a huge mansion and several other costly items.
He started abusing drugs and became extremely fond of using Quaaludes. Jordan met with several accidents under the influence of drugs. He once crashed his helicopter in his own yard and also sank his luxury yacht.
Jordan’s first wife was Denise Lombardo whom he divorced when he was running the ‘Stratton Oakmont’ investment firm. He then got married to Nadine Caridi. Nadine is a British–born model who was raised in Bay Ridge, Brooklyn. Belfort met her at a party and has two children from his second marriage.
Nadine and Belfort got separated after the former claimed that she had been a victim of domestic violence in the hands of her infamous husband. She claimed that the domestic violence worsened with Belfort’s drug abuse and romantic liaisons with several other women. They were formally divorced in the year 2005 and the couple’s children live with Belfort at present.
He is currently engaged to his longtime girlfriend Anne Koppe.
He served 22 months of imprisonment due to his involvement in defrauding the investors through his investment firm. Interestingly, the sentence was originally for four years. 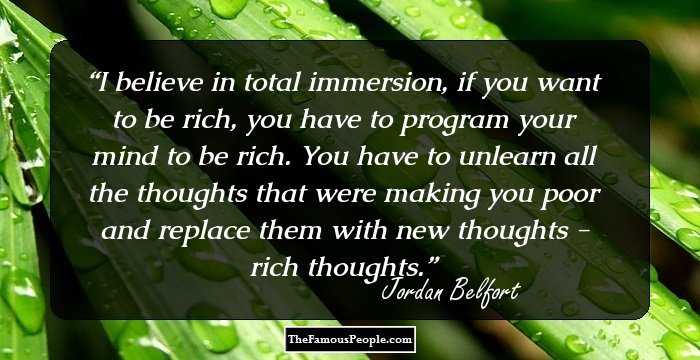 Quotes: You, Believe, I
Trivia
This famous motivational speaker’s memoir is the source of Martin Scorsese’s film ‘The Wolf of Wall Street’ which saw Leonardo DiCaprio play the lead role.

Quotes By Jordan Belfort | Quote Of The Day | Top 100 Quotes

See the events in life of Jordan Belfort in Chronological Order