Jonathan Edwards is considered to be one of the greatest and most influential American philosophers and theologians. He played a very significant role in the religious revival known as “The First Great Awakening” that revolutionized the Protestant religion in Europe and British America during the mid 18th century. As a theologian his works covered various aspects of the Christian religion though he was primarily regarded as a pioneer in the Reformed faith or Calvinism. He was the only son among the several children born to his parents and his family had great aspirations for him. He was accepted into the Yale College when he was just 13 and graduated as the head of his class. He was deeply influenced by the philosopher John Locke and scientist Isaac Newton. He became a pastor of the church at Northampton and played a significant role in the Christian revival movement “The First Great Awakening”. He preached about the sovereignty of God and encouraged people to develop a profound spiritual conviction. One of his very famous sermons, ‘Sinners in the hands of an Angry God’ projects vivid descriptions of hell and is a classic example of the sermons of the Great Awakening. His followers became known as New Light Calvinist ministers. American People
Philosophers
Spiritual & Religious Leaders
American Men
Yale University
Childhood & Early Life
Jonathan Edwards was born on October 5, 1703 and was one of the 11 children of Timothy Edwards and Esther Stoddard. His father was a minister of church at Connecticut who also tutored boys for college.
His parents ensured that their children received good education and his father personally coached him for college.
He enrolled at the Yale College in 1716 when he was just 13 years old. There he became acquainted with the works of the great philosopher John Locke, especially his ‘Essay Concerning Human Understanding’ which greatly influenced the young boy.
He also had a deep interest in science and admired scientists like Isaac Newton and his contemporaries. He loved nature and used to pray in the woods surrounded by natural beauty.
He graduated as valedictorian of his class in 1720. 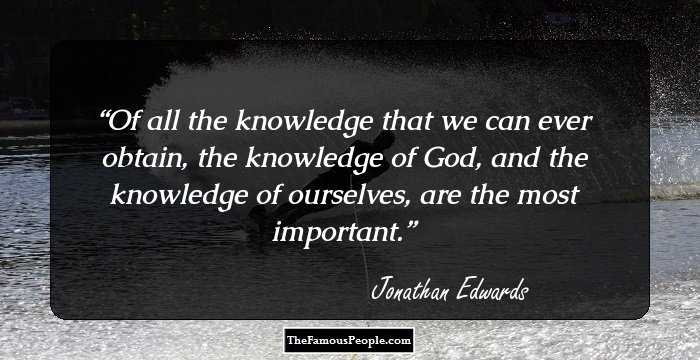 The Most Popular US Veterans
Career
In 1722 he was appointed a clergyman in a small Presbyterian Church in New York City. He worked in this position for eight months and quit in 1723.
He became a tutor at Yale where he followed an orthodox method of teaching. He was very devoted towards his Alma Mater.
A prolific writer, he recorded the development of his religious beliefs and philosophies in his diary which he maintained from 1720 to 1726.
He was ordained a minister of the church at Northampton where he served as an assistant to his maternal grandfather Solomon Stoddard. As a scholar-pastor, he devoted 13 hours a day to study.
His grandfather died in 1729 leaving him in charge of all the ministerial work at the church. Edwards became the pastor of the church at the age of 26. The church was one of the richest and most influential ones in the colony at that time.
He preached about the sovereignty of God in the work of salvation. The sermon he delivered in Boston in 1731 was later published as ‘God Glorified—in Man’s Dependence’.
A Christian revival which ultimately led to the First Great Awakening began to sweep Northampton in 1733 which made several hundreds of people join the church. This revival inspired him to study the process of conversion in all its forms.
In 1738, he published ‘Discourses on Various Important Subjects’, a collection of the five most important sermons that contributed most significantly to the revival.
He preached the sermon ‘Sinners in the Hands on an Angry God’ in Connecticut in 1741 which went on to become his most popular sermon.
Continue Reading Below
During the years 1742 and 1743, he preached a series of sermons at Northampton which were published under the title of ‘Religious Affections’ in 1746.
He published a biography of the missionary David Brainerd in 1749. The book became very popular among the missionaries like William Carey and Jim Elliot.
He became the pastor of the church in Massachusetts in 1751 and also served as a missionary to the Housatonic Indians. He had a profound interest in the welfare of the Indians and preached to them using an interpreter.
He was made the president of the College of New Jersey in early 1758. He tried declining the position citing poor health but was persuaded to accept the post. He died within a month of assuming office. 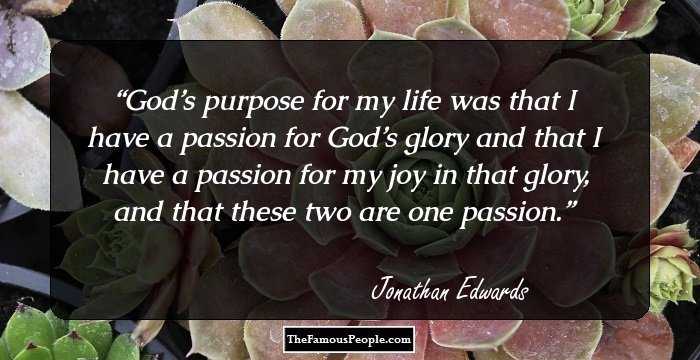 Quotes: Life, I
Major Works
His classic sermon ‘Sinners in the hands of an Angry God’ published in 1741 is one of his major works. He gave a vivid description of hell in this sermon which is regarded as one of the foremost sermons to have influenced the Great Awakening.
‘A Treatise Concerning Religious Affections’ (1746) gave an account of how true conversion to Christianity occurs. This book continues to be widely read even today.
His biography of American missionary David Brainerd, titled ‘The Life of David Brainerd’ published in 1749 is his most frequently reprinted book. The book contains material from Brainerd’s diary and greatly influenced missionary movements of the 18th and 19th centuries.
Personal Life & Legacy
He married Sarah Pierpont, daughter of the head founder of Yale College in 1727. She was a devout, practical and cheerful woman who proved to be an ideal wife and mother. The couple was blessed with 11 children.
He was known to be a charitable man who always helped those in need.
He was a strong supporter of smallpox inoculations and decided to get himself vaccinated in order to set a precedent. However he was already in ill health and could not bear the side-effects of the vaccine and died in 1758.
The Jonathan Edwards College, the first residential college at Yale University was established in his honour in 1933. 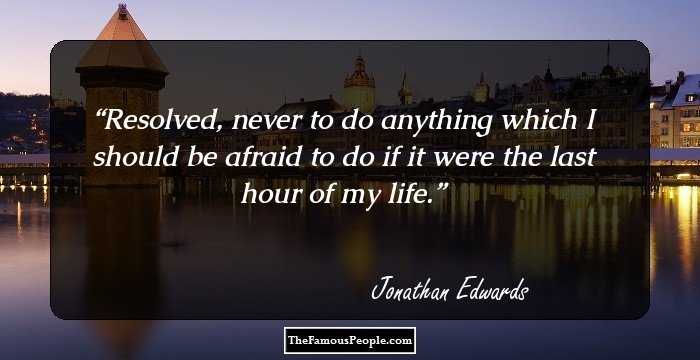 Quotes: Life, Never, I
Trivia
Aaron Burr, the third vice president of the U.S. was his grandson.
Recommended Lists:
Intellectuals & Academics #447
You May Like

Quotes By Jonathan Edwards | Quote Of The Day | Top 100 Quotes

See the events in life of Jonathan Edwards in Chronological Order