Considered to be the father of ‘modern atomic theory’, John Dalton was also a pioneer of weather forecast and was one of the first scientists to use homemade instruments to make weather observations. Much of his early works and observations using meteorological instruments laid the foundation for the study of weather forecasting. His fascination for the weather and atmosphere lead him to pursue research on ‘the nature of gases’, which in turn laid the ground on which he built the ‘atomic theory’. Today, he is known primarily for his work on atomic theory and although more than two centuries old, his theory still remains valid in the field of modern chemistry. Inquisitive by nature, his diligent research and meddlesome nature led him to make many discoveries in fields other than chemistry. He also made a study on colour-blindness, a condition from which he personally suffered. A non-conformist and ‘dissenter’, Dalton refused to accept much of his deserved fame and recognition and chose to live a simple and modest life. Today, his theories help modern scuba divers gauge oceanic pressure levels and have also facilitated cost-effective manufacturing of chemical compounds. To learn more interesting facts about his personal life and professional achievements, scroll down and continue to read this biography. Aaron Klug
6th September In History
DID WE MISS SOMEONE?
CLICK HERE AND TELL US
WE'LL MAKE SURE
THEY'RE HERE A.S.A.P
Quick Facts

British People
British Men
Male Chemists
Virgo Scientists
Male Scientists
Childhood & Early Life
John Dalton was born in the small settlement of Eaglesfield in Cumberland, England to Joseph Dalton, a poor weaver and Deborah Greenup, who belonged to a prosperous Quaker family in England.
His family was ‘Quaker’, a member of a Christian Movement, whose ideology was derived from a verse in the New Testament. At the age of 15, he helped his older brother Jonathan run a Quaker school in Kenda, Cumbria.
From 1787, he kept a meteorological diary and through his lifetime he recorded over 20,000 weather observations over a period of 57 years.
Sometime around 1790, he planned to pursue law or medicine but since he was a ‘dissenter’, a member of an organisation that opposed the Church of England, he was not allowed to study at English Universities. 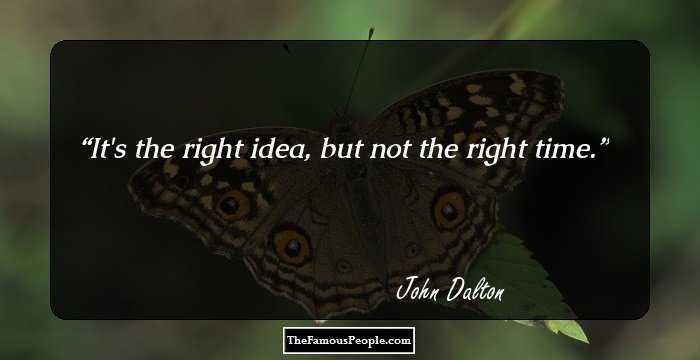 Quotes: Time
Continue Reading Below
Career
In 1793, he moved to Manchester, where he was appointed as a teacher of mathematics and natural philosophy at the New College, a dissenting academy that provided jobs to religious non-conformists with higher education.
All through his younger days, he looked up to Elihu Robinson, a prominent Quaker and accomplished meteorologist, who had a great influence in inculcating in him an interest for mathematics and meteorology.
In 1793, ‘Meteorological Observations and Essays’, his first book of essays on meteorological topics based on his own set of observations was published. This book laid the foundation for his later discoveries.
In 1794, he authored a paper titled ‘Extraordinary facts relating to the vision of colours’, one of his early works on colour perception of the eye.
In 1800, he gave an oral presentation titled ‘Experimental Essays’, that dealt with information on his experiments on gasses and the study of the nature and chemical makeup of air in relation to atmospheric pressures.
In 1801, his second book titled ‘Elements of English Grammar’ was published and in the same year he discovered ‘Daltons Law’, an empirical law coined by him related to the gases.
By 1803, his experiments on the ‘pressure of a mixture of gasses’ came to be known as the ‘Dalton's Law of Partial Pressures’.
During the early 1800s he formulated a theory on ‘thermal expansion’ and the ‘heating and cooling reaction of gasses’ with respect to expansion and compression of air.
In 1803, he authored an article for the Manchester Literary and Philosophical Society, in which he presented a chart on atomic weights, which was one of the first atomic charts to be created at that time.
Continue Reading Below
In 1808, he further explained atomic theory and atomic weight in the book titled ‘A New System of Chemical Philosophy’. In this book, he introduced the concept of how different ‘elements’ can be distinguished based on their atomic weights.
In 1810, he authored an appendix for the book ‘A New System of Chemical Philosophy’, in which he elaborated on ‘atomic theory’ and ‘atomic weight’. 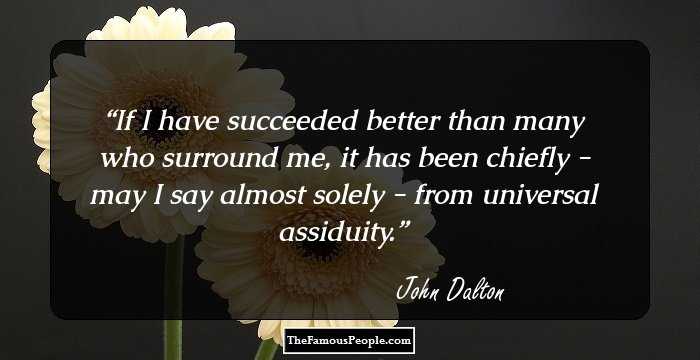 Quotes: Me, I
Major Works
In 1801, he came up with the ‘Dalton Law’ also known as Dalton's Law of Partial Pressures’. This theory is used by scuba divers today to gauge pressure levels at different depths of the ocean and its effect on air and nitrogen levels.
He coined the term ‘Daltonism’, which is a term for colour blindness and it became synonymous with his name. He elaborated on this topic in his 1798 paper titled ‘Extraordinary facts relating to the vision of colours, with observation’.
In his 1808 publication ‘A New System of Chemical Philosophy’, he coined the atomic theory and was the first scientist to prepare a table on atomic weights. This theory is considered valid even today and laid the foundation for further studies in this field.
Awards & Achievements
In 1794, he was elected as a member of the Manchester Literary and Philosophical Society.
In 1800, he was appointed as the secretary of the Manchester Literary and Philosophical Society and became the President of the society in 1817.
Personal Life & Legacy
He did not marry all his life and lived a modest life and socialised with a few friends from the Quaker group.
In 1837, he suffered a stroke and the following year he suffered another one that left him with a speech impediment.
After he suffered a third stroke, at the age of 77, he fell off from his bed and his attendant found him dead when he came to serve him tea. He was laid to rest at the Manchester Town Hall.
In honour of his achievements, many chemist and biochemists use ‘unit dalton’ to represent one atomic mass unit.
Trivia
A large statue of this scientist was erected in the Manchester Town Hall while he was still alive and probably he was the only scientist who got a statue in his lifetime.

See the events in life of John Dalton in Chronological Order