Sir Humphry Davy was a British chemist who made major contributions to the discoveries of chlorine and iodine. He discovered several alkali and alkaline earth metals, and isolated and named them. Born to middle-class parents in Cornwall, England, Davy was an intelligent, curious and artistic minded individual. He lost his father while he was just in his teens and was apprenticed to a famous surgeon with a large practice. As a young boy he dreamed of becoming a poet and had composed several verses which displayed his artistic nature. However, after starting to work in the apothecary of the surgeon, he realized that he loved science more than poetry and abandoned the latter in favor of the former. He eventually became a chemist and attracted the attention of Gregory Watt and Davies Giddy. Impressed by the young man’s talents, Giddy gave him a well-equipped chemistry laboratory where Davy could perform his experiments. He was then appointed the chemical superintendent of the Pneumatic Institution and in this position he studied the possible therapeutic uses of various gases and suggested the anesthetic use of nitrous oxide in human surgery. He was also an inventor who invented the Davy lamp, which allowed miners to work safely in close contact with flammable gases Norman Haworth
DID WE MISS SOMEONE?
CLICK HERE AND TELL US
WE'LL MAKE SURE
THEY'RE HERE A.S.A.P
Quick Facts

British People
Male Chemists
Male Scientists
British Chemists
British Scientists
Childhood & Early Life
Humphry Davy was born on 17 December 1778 in Penzance in Cornwall, England, into a middle-class family. He was the eldest son and had four siblings.
He received his primary education from Penzance school and Truro Grammar School.
His father, Robert, died in 1794 plunging the family into dire financial situation. Being the eldest son, Humphry was apprenticed to John Bingham Borlase, a surgeon with a large practice in Penzance.
Blessed with an artistic mind, the boy used to write poems and dreamed of becoming a poet. However, after he started to work in the apothecary he developed an even stronger interest in chemistry and experimentation and decided to abandon poetry in favor of science.
While working as an apprentice he also embarked on a journey of self-education. He was especially influenced by Lavoisier's famous work, ‘Traité élémentaire de chimie’ which he used as a guide in his chemistry experimentation. 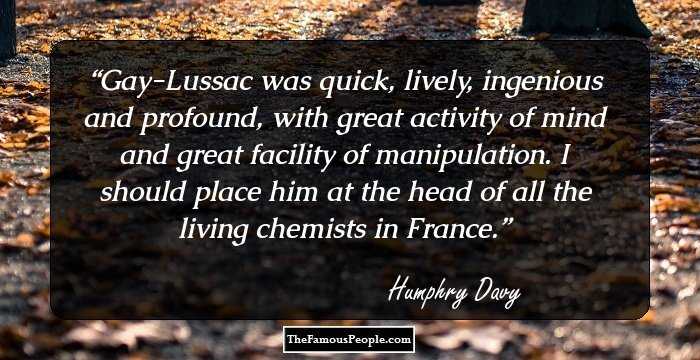 Quotes: Living, I
Continue Reading Below
Career
Humphry Davy became a talented chemist and his intelligence and skills impressed Gregory Watt and Davies Giddy (later Gilbert). They recommended him to Dr. Thomas Beddoes for the position of superintendent of the newly founded Pneumatic Institution in Bristol and he was appointed to the position in October 1798.
The Pneumatic Institution was founded to study the possible therapeutic uses of various gases and to examine the idea that certain diseases might be cured by the inhalation of gases. As the superintendent, Davy studied the composition of the oxides and acids of nitrogen and persuaded others in the scientific fraternity to look into the effects of inhaling nitrous oxide.
In 1800, the account of his experimental works was published as ‘Researches, Chemical and Philosophical’. The popularity of this publication established him as a reputed chemist and soon he was invited to lecture at the newly founded Royal Institution of Great Britain, in London.
In 1801, he left the Pneumatic Institution and moved to London and was appointed in the Royal Institution as an assistant lecturer in chemistry, director of the chemical laboratory, and assistant editor of the journals of the institution.
Davy gave his first lecture on the relatively new subject of 'Galvanism' on 25 April 1801. It garnered rave reviews and within a period of months he became a very popular lecturer.
In June 1802 Davy was nominated to full lecturer at the Royal Institution of Great Britain. He was just 23 years old at that time.
He became a Fellow of the Royal Society in November 1804 and its secretary in 1807. The same year, he also became one of the founding members of the Geological Society. Years later, in 1820, he would become president of the Royal Society.
In 1807, he discovered potassium which he derived from caustic potash (KOH). Potassium was the first metal that was isolated by electrolysis. As a pioneer in the field of electrolysis, he used the voltaic pile to split common compounds and thus prepare many new elements. He was the first to isolate magnesium, boron, and barium.
He traveled to France in 1813 where he was asked by Gay-Lussac to investigate a mysterious substance isolated from sea-weed by Bernard Courtois. Davy worked in his hotel room and showed that the “mysterious substance” was an element, which is now called iodine.
Continue Reading Below
Upon his return to England in 1815, Davy experimented with lamps for use in coal mines after being asked to design a safety lamp that would provide illumination without exploding in flammable atmospheres. After a series of experiments he devised the miner's safety lamp though he made no attempts to patent it.
Major Works
Sir Humphry Davy is best remembered as a pioneer in the field of electrolysis and for his major contributions to the discoveries of the elemental nature of chlorine and iodine.
The Davy lamp which he devised is an important invention of his. The safety lamp, consisting of a wick lamp with the flame enclosed inside a mesh screen was originally created for use in coal mines, to reduce the danger of explosions due to the presence of methane.
Awards & Achievements
Humphry Davy was knighted by the king in 1812 in recognition of his great scientific discoveries and was awarded a baronetcy in 1819.
He was awarded the Rumford medal in 1816 for inventing the Davy lamp.
In 1827, he won the Royal Society’s Royal Medal for his 1826 Bakerian lecture “On the Relation of Electrical and Chemical Changes”.
Personal Life & Legacy
He married a wealthy widow, Jane Apreece, in 1812.
Sir Humphry Davy suffered from poor health during his later years. His body was considerably weakened by a series of strokes and he died in a hotel room in Geneva, Switzerland, on 29 May 1829, at the age of 50.
The Royal Society of London has awarded the Davy Medal—named in his honor—annually since 1877 "for an outstandingly important recent discovery in any branch of chemistry."

See the events in life of Humphry Davy in Chronological Order