Advanced Search
One of the most fierce and outspoken political figures in the USA, Jesse Jackson is known for his crusade against racism in America. Ever since he entered high school, he came face to face with the tortures that all African-Americans had to go through while trying to lead a normal life. Thus, from a very young age he involved himself in various civil rights movements, which earned the favor of Martin Luther King Jr. He conducted several marches and participated in various movements in support of equality and to end racial discrimination. In a short span of time, he became one of the leading personalities among the African-Americans to fight against racial discrimination. He was even looked upon as the successor of Martin Luther King Jr. but he fell prey to certain controversies and was suspended from Southern Christian Leadership Conference (SCLC), the brainchild of King. Apart from advocating equal rights for the African-Americans, Jackson also promoted numerous global causes. He has been fighting against abortion and has been working hard to stop drug abuse. American People
Black Activists
Political Leaders
Political Activists
Black Political Leaders
Childhood & Early Life
Jesse Jackson was born to Helen Burns, who was only 16 at the time of his birth. His biological father was Noah Louis Robinson, a 33 year-old former professional boxer, who was married. When Helen married Charles Henry Jackson, he adopted her son and gave him his last name.
Jesse was sent to the Sterling High School in Greenville, a school for the African-Americans, and graduated in 1959. He went to the University of Illinois after receiving a scholarship but transferred to North Carolina A&T in 1960, after his second semester.
After graduating from North Carolina A&T in 1964 with a bachelor’s degree in sociology, he attended the Chicago Theological Seminary on a scholarship.
While at the North Carolina A&T, he was an active participant in several civil rights protests which he continued in Chicago Theological Seminary. He dropped out of the university to fully dedicate himself to the civil rights movement. 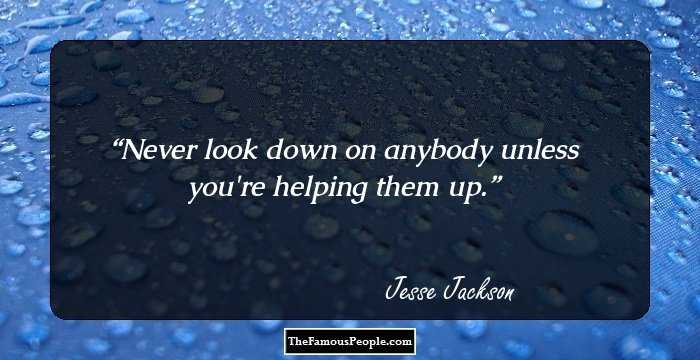 Quotes: Never
Continue Reading Below
Career
In 1966, he was appointed the head of the Southern Christian Leadership Conference (SCLC), an African-American civil rights organization started by Martin Luther King Jr.
He was appointed as the organization’s national director in 1967 and under him the protestors boycotted consumer goods in an attempt to force the owners of several businesses to hire African-Americans.
However, his enthusiasm was not well-received by several members in the organization. Even Martin Luther King Jr. was a little annoyed by the young activist’s insolence.
Jackson was ordained a Baptist minister by the Chicago church in 1968.
In 1968, after King’s assassination, Jackson was in trouble for exaggerating the scene. He described to the reporters that King died in his arms and that he was the last person King spoke to before dying, whereas Jackson was not even there at the exact spot where the assassination happened.
People were enraged by his remarks and he was suspended from Southern Christian Leadership Conference (SCLC), before he resigned in 1971. Following his resignation, he established the ‘People United to Save Humanity’ (PUSH) in Chicago.
By this time, Jackson was increasingly getting involved in the national politics. He travelled to South Africa in 1979 where he gave a public speech disapproving apartheid. He also went to the Middle East and extended his support for the formation of a Palestinian state.
He founded the ‘National Rainbow Coalition’ in 1984 with the aim of attaining equal rights for African-Americans, women and homosexuals. The same year he contested the Presidential election. Though he did not succeed, he was a third Democratic candidate to have earned the highest number of votes.
He made a second run for presidency in 1988 which he lost to Massachusetts Governor, Michael Dukakis. After this, he withdrew from his campaign for presidency.
Continue Reading Below
He continued working for the right and equality of African-Americans and in 1990 he was elected the shadow senator for the District of Columbia.
In 1996, both his institutions ‘PUSH’ and the ‘National Rainbow Coalition’ merged to form the Rainbow/PUSH Coalition.
Jackson got into a yet another controversy in 1999 while trying to defend six high-school students who were expelled for fighting in Decatur, Illinois. He tried to convince the board to take back the students, a request the board simply declined. In response, he led a march at the school and was arrested for trespassing.
He remains active in socio-political activities and in 2012 he openly praised Obama's decision to support gay marriages. 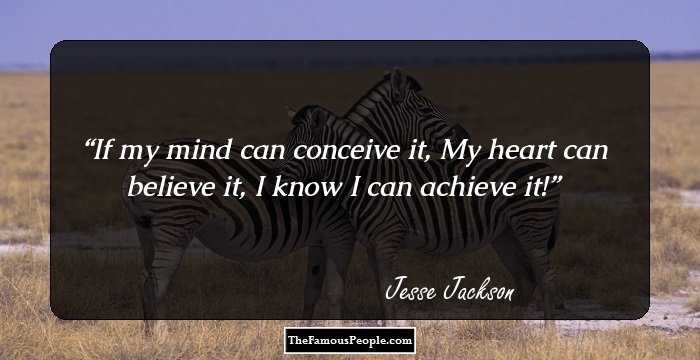 Quotes: Heart, Believe, I
Major Works
His organization PUSH (People United to Save Humanity), which later merged with another establishment ‘National Rainbow Coalition’, works towards establishing social equality and advocates the sharing of economic as well as political power in America.
PUSH also launched a campaign against abortion and supported the United States pro-life movement which argues that human fetus is a (living) person who has right to live.
He was the second African-American Democrat candidate, after Shirley Anita St. Hill Chisholm, to run for the Presidential office.
Awards & Achievements
In 2000, he was awarded the Presidential Medal of Freedom, the highest civilian honor of America, for his social and political activism.
Molefi Kete Asante, an African-American scholar, historian, and philosopher included Jackson’s name in the list of the ‘100 Greatest African-Americans’ in 2002. 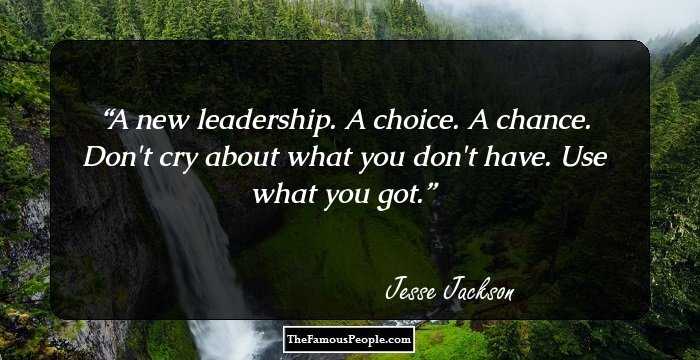 Quotes: You
Personal Life & Legacy
On December 31, 1962, he married Jacqueline Lavinia Brown, with whom he has five children.
In 2001, it was revealed that he had an illicit affair with Karin L. Stanford, a writer and professor, with whom he had a daughter and was paying $4,000 a month to support his child.
Trivia
While at high school, this famous African-American political activist received a contract offer from the Chicago White Sox, Major League Baseball team, which he declined but he accepted a football scholarship from the University of Illinois.
This African-American once made disparaging comments on presidential candidate Barack Obama, while on a break during an interview with leading news channel Fox News, without realizing that the mike was on.
Recommended Lists:
Leaders #182

Quotes By Jesse Jackson | Quote Of The Day | Top 100 Quotes

See the events in life of Jesse Jackson in Chronological Order