An iconic politician and a revolutionary, Jawaharlal Nehru is widely admired for his astute idealism and statesmanship. Endowed with a wonderful political outlook and futuristic thinking, Nehru in his lifetime went on to become a paramount leader of the Indian independence movement. He was undoubtedly the central figure of the 20th century Indian politics and contributed much to the nation both before and after Independence. With Gandhi as his mentor, Nehru worked his way to become an important leader of the Indian National Congress. He was the first to call for complete independence from the British. Upon achieving independence, Nehru became the first Prime Minister of the nation. He played a major role in making India a sovereign, socialist, secular, and democratic republic. For the same, Nehru is often referred to as the ‘architect of modern India’. He shaped modern India's government and political culture along with a sound foreign policy. Till date, the longest serving Prime Minister, Nehru also held the office of the Minister of External Affairs. He envisioned political, social and economic reforms for the country’s advancement and growth. B. R. Ambedkar
DID WE MISS SOMEONE?
CLICK HERE AND TELL US
WE'LL MAKE SURE
THEY'RE HERE A.S.A.P
Quick Facts

Indian Celebrities
Prime Ministers
Political Leaders
Indian Men
Trinity College Dublin
Childhood & Early Life
Jawaharlal Nehru was born to Motilal Nehru and Swarup Rani in Allahabad in British India. He was the first of the three children of the couple; other two were Vijaya Lakhsmi and Krishna Huthseeing.
His father was a barrister and was actively involved in the Indian independence movement and served as the President of the Indian National Congress twice.
Nehru received most of his primary education at home with the help of several tutors and governess. It was Ferdinand Brooks who was responsible for young Nehru’s indulgence and interest in science and theology. However, the same did not last long and his interest wavered after the departure of Brooks.
At the age of 16, Nehru was enrolled at the Harrow School in England after which he got admission at the Trinity College, Cambridge, where he earned his honors degree in natural science.
With his education graph was going steady, he also started developing the sense of nationalism. Writers like G. M. Trevelyan, Bernard Shaw, H.G Wells and J.M. Keynes shaped much of his political and economic thinking.
After attaining his graduate degree, Nehru relocated to London in 1910 and enrolled himself at the Inns of Court School of Law, where he studied law. In two years, he passed his bar examination and was offered to be admitted to the English bar.
Nehru returned to his homeland in 1912 and started practising law as a barrister at the Allahabad High Court. Slowly and gradually, he involved himself in national politics. 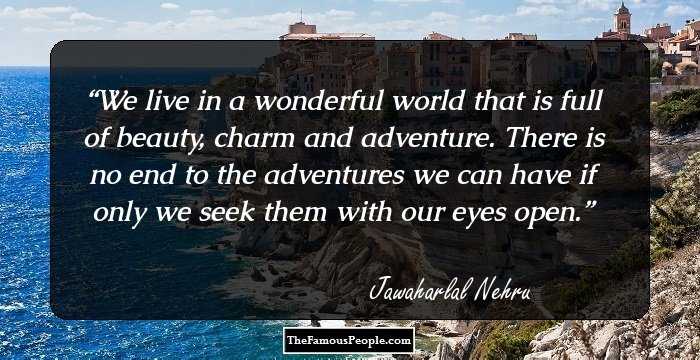 Continue Reading Below
Contribution in Freedom Struggle
Though Nehru wasn’t exactly convinced with the functioning of the Indian National Congress, which was dominated by the English-knowing upper class elite, yet he participated in the civil rights campaign initiated by Gandhi.
With his radical political views, Nehru condemned the Indian Civil Service (ICS) for its support of British policies. The slow pace of the nationalist movement further irked Nehru who joined hands with the aggressive nationalist leaders, demanding Home Rule for Indians. Though he contributed both for Besant and Tilak league, his contribution was greater for the former.
Nehru argued for self-government and status of a Dominion within the British Empire as enjoyed by Australia, Canada, South Africa, New Zealand and Newfoundland.
It was in 1916 that Nehru first met Gandhi, a relationship that turned to be one of a lifetime for the two. With Gandhi as his mentor, Nehru rose to prominence in the National Congress so much so that he was elected to the post of the general secretary of the Congress.
Nehru not only contributed greatly to the national movement in India but also gave the freedom struggle an international outlook in 1927, when he attended the congress of oppressed nationalities in Brussels in Belgium
He was instrumental in making the struggle of common people in the princely states, a part of the nationalist movement.
Nehru appealed for complete national independence which was initially objected to by Gandhi who proposed a dominion status for India in a time frame of two years. Following the rejection of Gandhi’s plea and Nehru’s presidency over the Lahore session of Congress in 1928, Nehru demanded for complete independence. This resolution made him one of the most significant leaders of the independence movement.
Apparently inhibitive about the civil disobedience movement, Nehru realized the potential of salt satyagraha and jumped on to support Gandhi and was imprisoned along with a large number of nationalists.
During the World War II, Nehru demanded for assurance of full independence for India after the war and inclusion of Indians in the central government to share power and responsibility, but the British did not oblige. He, along with Gandhi, manifested a limited civil disobedience and was jailed for the same.
Continue Reading Below
In 1947, as India rejoiced the withdrawal of British from the Indian soil, it suffered the pain of partition, as the British had decided to partition the country into two – India and Pakistan. 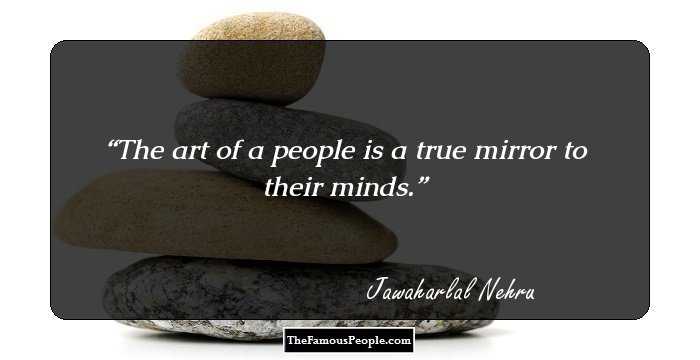 Quotes: Art
As Prime Minister
Nehru was appointed the head of the interim government. Though he made numerous attempts to convince the British of not dividing the country but Mohammad Ali Jinnah’s powerful opposition, communal violence and political disorder forced him to reluctantly accept the same. Pakistan was formed on August 14, 1947 and Nehru became the first Prime Minister of independent India.
Nehru propelled India towards modern age of technological advancements and innovations. Furthermore, Nehru greatly professed democratic value and equality for all, irrespective of caste, color or creed.
Nehru, during his term as the Prime Minister, brought forward radical changes in domestic, international, economic, agricultural and social policies.
Under his administration, he established numerous basic and heavy industries, which he believed were fundamental for Indian economy to take a step forward towards development and modernization. He advocated for a mixed economy where government controlled public sector co-existed peacefully with the private sector.
A passionate advocate of education, Nehru believed that educating the young India was imperative for the country’s future growth. For the same, he established numerous institutions of higher learning, including All India Institute of Medical Sciences, the Indian Institutes of Technology, the Indian Institutes of Management and the National Institutes of Technology. He even included free and compulsory primary education to all children in his five-year plan.
Furthermore, it was Nehru who laid the stepping stone for the foundation of the National Defence Academy India and the Atomic Energy Commission of India (AEC). Despite being a follower of peace and non-violence, he realised the importance of defence and tried to equip the country with the best modern equipments and defence methods to safeguard the freedom of the nation.
Nehru initiated the non-aligned movement (NAM) professing neutrality. The NAM was aimed at being neutral and not joining any of the two power blocks - the US and the USSR.
Continue Reading Below
Nehru strongly supported the inclusion of People’s Republic of China in the United Nations to establish warm and friendly relations with the neighbouring country.
The pacifist policies of Nehru towards China paid no result as the border disputes led to the Sino-Indian war in 1962, which ended when China declared a ceasefire on November 20, 1962 and announced its withdrawal from the disputed area in the Himalayas.
Throughout Nehru’s reign, Kashmir remained a subject of contention, as both India and Pakistan wanted to include the state in their country. Pakistan, in 1948, even made an attempt at seizing Kashmir by force but failed in their attempt.
It was during his tenure that the Portuguese left Goa and the region became a part of India.
Awards & Achievements
Nehru was bestowed with the Barat Ratna award in 1955, India’s highest civilian honor for his outstanding contribution during the freedom struggle and as the first Prime Minister of India. 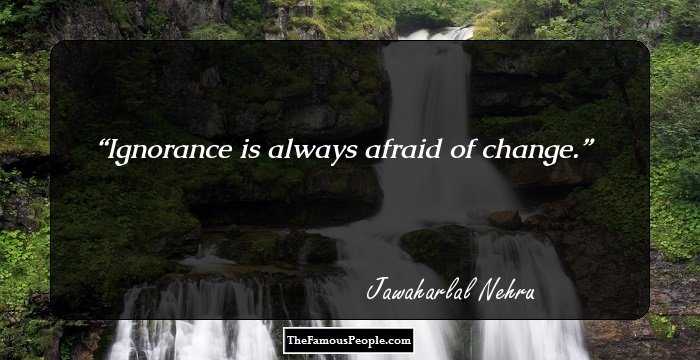 Quotes: Change
Personal Life & Legacy
Jawaharlal Nehru went into the wedlock with Kamala Kaul in 1916. His only daughter, Indira Priyadarshini Nehru (later Gandhi) went on to become the first woman Prime Minister of the country.
Nehru’s health started deteriorating in the early 1960s. Though he did spend some time recuperating in Kashmir, but it did not help much.
Nehru left for the heavenly abode on May 27, 1964. His body was cremated as per Hindu rites at Shantivan, on the banks of the Yamuna River. Thousands of Indians flocked to Delhi to mourn his death.
Continue Reading Below
For his relentless contribution towards the betterment and welfare of children, his birthday (November 14th) is celebrated throughout the country as Children’s Day.
Several institutions and memorials have been named after him as a mark of respect and tribute. Some of these include, the Jawaharlal Nehru University, Jawaharlal Nehru Port, Nehru Memorial Museum and Library.
In 1959, the Government of India initiated the Jawaharlal Nehru Award for International Understanding. It is presented for outstanding contribution to the promotion of international understanding, goodwill and friendship among people of the world.
Fondly referred to as Chacha Nehru, his style is emulated till date with ‘Nehru Jacket’ and ‘Nehru Cap’.
Trivia
He served as the first Prime Minister of independent India from August 15, 1947 until May 27, 1964.
His birthday, which falls on November 14th, is celebrated as Children’s Day across the country.
He has authored various books, including ‘The Discovery of India’, ‘Glimpses of World History’, and his autobiography, ‘Toward Freedom’.
He is referred to as the 'Architect of Modern India'. Often his surname is prefixed with the words ‘Chacha’ and ‘Panditji’.
He established many institutions of higher learning, including the All India Institute of Medical Sciences, the Indian Institutes of Technology, the Indian Institutes of Management and the National Institutes of Technology.

Quotes By Jawaharlal Nehru | Quote Of The Day | Top 100 Quotes

See the events in life of Jawaharlal Nehru in Chronological Order 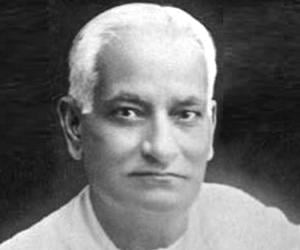