Jacques-Louis David was a famous French painter best known for his Neo-classical style of painting which made him one of the foremost painters of his time. He started painting when the Rocco style was in vogue and is credited to have brought about a change in the artistic attitudes of people through his unique painting style and popularized neoclassicism. He also had an active interest in politics and served as the artistic director of the French Revolution for a brief time in 1789. He was primarily a painter of historical events though he was equally skilled at painting other genres. Painting was something he loved from a young age though he had to face a lot of opposition before he could pursue his passion professionally. Having lost his father at an early age, he was brought up by his architect uncles who pressurized him to follow in their footsteps. The boy rebelled and went on to create his own destiny and soon became a famous painter. He was a revolutionary who expressed his ideas through his paintings. Incredibly talented, he also possessed a volatile temper and was fiercely independent. A leading painter of his time, he also mentored several students, many of whom like Antoine-Jean Gros went on to become legendary painters themselves. French People
French Artists & Painters
Male Artists & Painters
Virgo Artists & Painters
Virgo Men
Childhood & Early Life
He was born into a wealthy family on 30 August, 1748, in Paris. His father was killed in a duel when David was just nine and he was sent to live with his uncles.
He had a facial tumor that impeded his speech and made it difficult for him to socialize. He loved drawing from a young age and used to draw behind his teacher’s back even when he was at school.
His uncles were rich architects and sent him to the prestigious Collège des Quatre-Nations. The uncles hoped that young David would follow their footsteps and become an architect himself. But the boy wanted to become a painter.
Rebelling against his family, he went to learn painting from François Boucher, one of the leading painters of the time. Boucher felt that his friend Joseph-Marie Vien would be a better teacher and sent David to him.
David then attended the Royal Academy of Painting and Sculpture. Each year the Academy awarded the prestigious Prix de Rome scholarship for which he diligently worked. After several failed attempts, he finally won it in 1774. The award funded a stay in Rome and he traveled to Italy with his mentor, Joseph-Marie Vien. 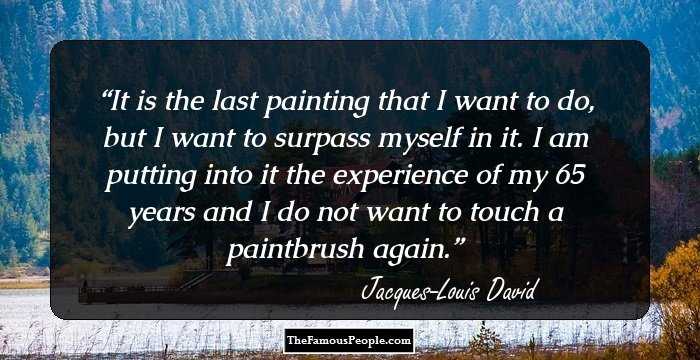 Quotes: Experience, I
Continue Reading Below
You May Like

Famous Beautiful Women With Green Eyes
Career
In 1784 he painted the ‘Oath of the Horatii’ which depicts a scene from a Roman legend which stresses the importance of self-sacrifice for one’s country. The painting was an immediate success and became very famous.
He displayed the painting ‘Death of Socrates’ in the salon of 1787. The poignant depiction of Socrates’ last lecture before he consumes hemlock brew and dies struck a chord with the viewers and till date remains a favorite of critics.
Painted in the Neo-Classical manner, his ‘The Lictors Bring to Brutus the Bodies of His Sons’ (1789) shows the Roman leader Brutus grieving over the death of his sons who had ironically been killed at his own orders.
He painted ‘The Death of Marat’ in 1793, a painting which would go on to become a famous image of the French Revolution in which he took an active interest. The painting shows the journalist Jean-Paul Marat lying dead in his bath, murdered by Charlotte Corday.
Due to his political activities, he had been imprisoned in Luxembourg Palace in 1795 and there he conceived the idea to paint ‘The Intervention of the Sabine Women’ which was ultimately completed in 1799. It depicts the Sabine women interposing themselves to separate the Romans and Sabines.
He earned a commission to paint an image of Napoleon and painted ‘Napoleon Crossing the Alps’ in 1801 which was an idealized image of Napoleon crossing the Alps through the Great St. Bernard Pass in 1800.
He often expressed his revolutionary ideals in his paintings as was apparent in the 1810 painting ‘The Distribution of the Eagle Standards’ which depicts a ceremony arranged by Napoleon after he became the emperor.
His last painting was ‘Mars Being Disarmed by Venus’ which he began painting in 1822 and completed three years later. 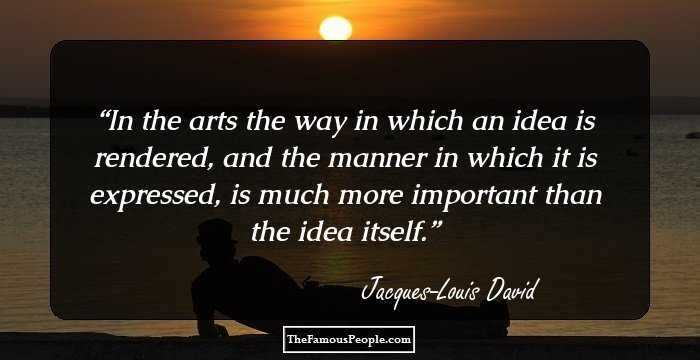 Major Works
His painting ‘The Death of Socrates’ depicting the last moments of the great Greek philosopher is considered one of his masterpieces. The painting shows Socrates sentenced to death by drinking poison hemlock, delivering his final lesson on death to his students as they watch him sadly.
Awards & Achievements
He was awarded the prestigious Prix de Rome in 1774 for his painting ‘Erasistratus Discovering the Cause of Antiochus' Disease’.
He was been made a Chevalier de la Legion d’honneur in 1803 and promoted to a Commandeur de la Legion d’honneur.
Personal Life & Legacy
In 1782 he married Marguerite Charlotte, the daughter of an influential building contractor. In fact, it was the wealthy contractor himself, who impressed by the young artist, had asked him to marry his daughter. This marriage brought financial security to David and the couple eventually went on to have four children.
He was struck by a carriage as he was leaving a theater in December 1825 and died a few days later on December 29, 1825.
You May Like