DID WE MISS SOMEONE?
CLICK HERE AND TELL US
WE'LL MAKE SURE
THEY'RE HERE A.S.A.P
Popularity Index
20
Artists #424
Artists & Painters #435
Quick Facts

Who was Sonia Delaunay?

Painter and designer Sonia Delaunay was an artist who utilized bright colors and geometric shapes in her work. Her art was influenced by both Russian and French styles, and she is remembered for both her fine arts and applied arts, particularly in fabrics and textiles. Her interest in art-deco and abstract art influenced her work in many areas, including fashion and costume design as well as interior design. Although she is associated with several artistic movements, she is most often connected with a school of art called ‘Orphism’, which branched out of ‘Cubism’. This was an artistic style that she and her husband Robert developed together, beginning in the pre-WWI era. Whether she was painting or working with fabric, she generally used bright colors and repeating patterns. She is remembered for her innovative dress and costume designs as well as interior design objects and design work she did for stage sets and films. Although she often thought of her textile work as a kind of exercise to help her in what she saw as her more important work of painting, she may have left behind a deeper legacy in the world of fashion design. She created many beautiful and sophisticated fabrics

Women Artists
French Artists
Women Artists & Painters
French Women Artists
Childhood & Early Life
Sonia Delaunay was born in what is now the Ukraine. Her birth name was Sarah Stern. At the age of five, in 1905, she was adopted by her aunt and uncle and given their surname, Terk. They were wealthy and lived in St. Petersburg.
With her adopted parents, she traveled throughout Europe during her childhood and youth. This introduced her to many styles of art. She also learned to speak several languages.
In 1903, she studied art for a year at Karlsruhe ‘Fine Arts Academy’ in Germany. She went there on the recommendation of her drawing teacher. 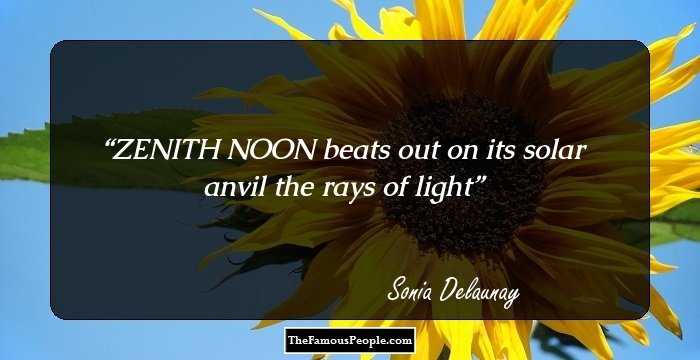 French Artists & Painters
Scorpio Artists & Painters
French Female Artists & Painters
Scorpio Women
Career
In 1904, Sonia headed to Paris, where her developing artistic talent was influenced by the post-impressionists and fauvists. Still in Paris, the next year she studied print-making with Rudolf Grossman.
Perhaps even more important than her formal studies was the time she spent viewing art in the various galleries, especially the works of artists such as Van Gogh and Gauguin.
Her first solo artistic exhibition was held in 1908 at the ‘Montparnasse Gallery’. The exhibition was run by her first husband, Wilhelm Uhde.
Sonia's second husband, Robert Dulaunay, was a fellow artist. Together they explored the use of color in art, influenced by color theorist Michel-Eugene Chevruel.
Sonia and Robert Dulaunay helped to found ‘Orphism’, a school of abstract art that combined bold colors and geometric shapes and patterns. One of their main ideas involved ‘simultaneous design’, which focused on placing different designs next to each other to cause an effect by the juxtaposition.
Her work with fabrics included quilt design. In 1911, Sonia Delaunay created a patchwork quilt for her newborn son, which represented some of her earliest experiments in the use of geometric shapes and bright colors.
Sonia was influenced by the art-deco movement. Around 1913 Sonia created a new fashion called ‘simultaneous dresses’ which applied their theory of juxtaposed designs to dress designing.
Her fashion and design work extended to costumes and sets she created for both theater and film. This included work on Diaghelew's 'Ballet Russes' around 1918.
Her fashion and design work led her to open her own company, in 1924. She became well-known for her innovative designs in dresses and handbags.
Continue Reading Below
She returned to painting in the 1930s and onward. She maintained a great enthusiasm for painting, seeing it as one of the most important parts of her work.
After the death of her husband in 1941, she painted a series of large paintings. The first was called 'Rhythme', and the others were called 'Rhythmecoloré' and 'Rhythmes-couleurs.'
Major Works
Her 1912-1913 painting 'Bal Bullier' of a dance-hall in Paris is considered one of her major works. It combined color and movement.
In 1937, she and her husband Robert worked to decorate the ‘World Exhibition’ pavilion. It was located in Paris across from the Eiffel Tower.
Awards & Achievements
She received a ‘World Exhibition’ gold medal for a fresco. It was entitled 'Portugal.'
In 1964, they held a retrospective of her work at the ‘Louvre’. She became the first living woman artist to have this honor.
The ‘French Legion of Honor’ named her an officer in 1975. This is one of the highest decorations in France.
Personal Life & Legacy
Delaunay was Jewish by birth. Though native to Russia, she is sometimes cited as Russian-French since she spent so much of her life in France. Sonia married art dealer Wilhelm Uhde in 1908. They marriage ended in divorce two years later.
In 1910, she married Robert Delaunay. He was a fellow artist. She gave birth to Charles Delaunay a year later. He became a well-known expert on jazz music.
When World War I began, the Delaunays moved first to Spain and then to Portugal. They returned to Paris in 1921.
Sonia died in Paris at the age of 94. Her legacy continues, especially in fashion design.
Trivia
In 2004, the French Post Office issued a commemorative stamp in the honor of this famous personality. It depicted her painting 'Coccinelle.'
The famous painter also became interested in flamenco dancing while living in Spain and Portugal.
You May Like

See the events in life of Sonia Delaunay in Chronological Order