Advanced Search
Huey Percy Newton was a revolutionary political activist who co-founded the Black Panther Party along with Bobby Seale. Interest in radical politics came naturally to Newton whose father was an active member of the National Association for the Advancement of Coloured People (NAACP); in fact, he was named after the radical politician Huey Long who was the former governor of Louisiana. He grew up poor and often found himself the victim of racial discrimination which disgusted him. In spite of attending several public schools, he was never taught anything of value which forced him to self-educate himself. He already began having brushes with the law by the time he was a teenager. He became involved in politics while at college where he met Bobby Seale. The duo formed the Black Panther party with a view to protect the black community from racial attacks and police brutality. The party soon became very popular and had members in several cities throughout the U.S. Newton believed in the use of violence to achieve his means and the party was soon described by the FBI as being a threat to national security. Newton’s life increasingly became embroiled in a cycle of drugs and violence, and he often came into conflict with the Black Guerilla Family (BGF) which ultimately led to his murder at the hands of a BGF member. American Celebrities
Revolutionaries
Political Leaders
American Men
University Of California, Santa Cruz
Childhood & Early Life
Huey Newton born to Walter Newton and Armelia Johnson. He was the youngest among the seven siblings. His father was a member of the National Association for the Advancement of Coloured People (NAACP). Despite being poor, the family was close-knit.
He grew up in Oakland where he experienced rampant racial discrimination.
He attended Oakland Technical High School but no teacher there had ever tried to instill in him a thirst for knowledge; he graduated in 1959 without possessing any real education.
Undaunted, he embarked on a path of self-education by teaching himself to read.
He began committing petty crimes as a teenager and was arrested many times.
He enrolled at Merritt College where he joined the Afro-American Association and became involved in politics. A voracious reader, he read the works of Karl Marx, Malcolm X, Vladimir Lenin, etc. which influenced his political thoughts. 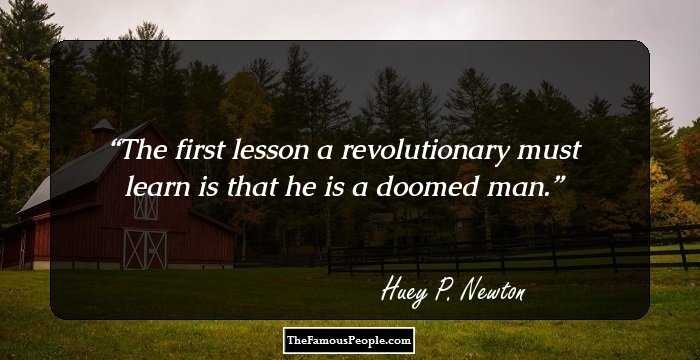 Continue Reading Below
Later Years
Newton, along with a fellow student from Merritt College, Bobby Seale, formed the Black Panther Party for Self-Defence in October 1966. Seale was chosen the Chairman while Newton became Minister of Defense.
The party was founded with the objective of protecting the black community from racial discrimination and police brutality, and soon garnered a country wide following.
The Black Panthers were closely involved with the Black Power movement that focused on promoting political and cultural interests of black. This movement was very prominent during the 1960-70s.
In 1967, the organization began circulating its official newspaper ‘The Black Panther’.
The party became very popular due to the causes it promoted and it had expanded to several cities in the U.S. like Baltimore, Chicago, Detroit, Philadelphia, etc. by 1968. The party had more than 10,000 members by 1969.
The organization developed a Ten-Point Program in which they outlined their demands for freedom from brutality, education, housing, food security and peace. This document defined the social and political aspirations of the party.
The Black Panthers, led by Newton initiated a number of social programs for the betterment of the black community. These initiatives included opening of educational facilities, food security programs, and martial arts training for teenagers.
Newton published his autobiography ‘Revolutionary Suicide’ in 1973.
The group’s popularity, however, began to wane in the late 1970s as a result of their violent and militant activities which had begun to overshadow their social and political goals. Several disillusioned members left the party and its membership dwindled to just 27 by 1980.
Continue Reading Below
Newton developed a drug problem and began using state funds meant for the Panther-sponsored school to pay for his drugs. Embezzlement charges were slapped on him in 1982 and the party broke up.
Newton had been involved in several illegal and criminal offences including the murder of police officer John Frey. He had also been convicted on counts of illegal firearms possessions and had been imprisoned. 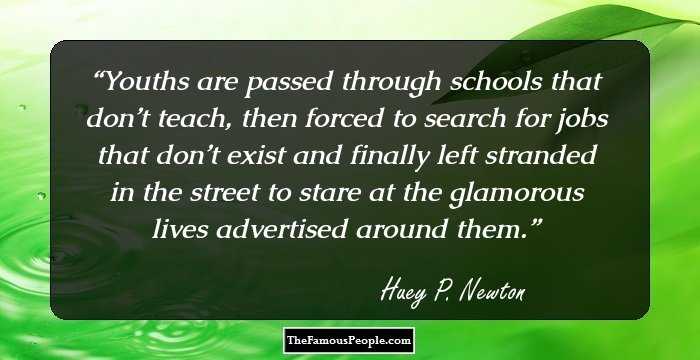 Major Works
He co-founded the Black Panther Party which was one of the most powerful and influential groups ever to be deeply involved with the Black Power movement. The party worked for the betterment of the black community before their social work was overshadowed by their militant activities.
Personal Life & Legacy
His first marriage was to Gwen Fontaine in 1974 which ended in divorce in 1983.
He later married Frederika in 1984 with whom he lived till his death.
He had strained relations with the Black Guerilla Family (BGF) and was shot to death by a BGF member in 1989. 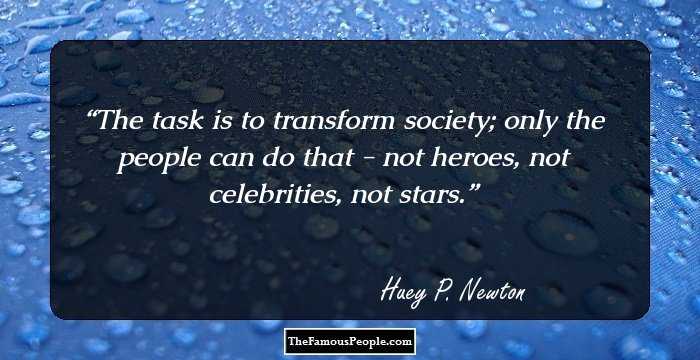 Trivia
Singer Tupac Shakur referred to this political activist in his song ‘Changes’.
He was good friends with the eminent biologist Robert Trivers.
The main character in the cartoon show ‘The Boondocks’ is named after him.
One lesser-known fact about this revolutionary is that he was a well-educated man who had earned his Ph.D. in history of consciousness from the University of California in 1980.
Recommended Lists:
Leaders #471

See the events in life of Huey P. Newton in Chronological Order