Howard Washington Thurman was an African-American author, philosopher, scholar, and civil rights leader. He played an important role in many social justice movements of the twentieth century. His theology of radical nonviolence influenced several civil rights activists such as Martin Luther King Jr. Thurman was the grandson of former slaves and his grandparents stressed on education as a means of overcoming racial discrimination. He studied at Morehouse College and eventually went to Rochester Theological Seminary. He later served as the pastor of Mount Zion Baptist Church in Oberlin, Ohio. Over the course of his academic career, he was chosen to be the dean of Rankin Chapel at Howard University. He also served as the dean of Marsh Chapel at Boston University. He received much acclaim for co-founding a major interracial, interdenominational church in US along with Alfred Fisk. American Celebrities
Civil Rights Activists
American Men
Male Activists
Male Philosophers
Career
After finishing his education, Howard Thurman became the pastor of Mount Zion Baptist Church in Oberlin, Ohio. He held this position from 1926 to 1928. He next moved to Atlanta, Georgia, where he had a joint appointment to Spelman College and Morehouse College in philosophy and religion. In 1929, Thurman pursued further studies at Haverford College. In 1932, he was selected to be the first dean of Rankin Chapel at Howard University. He also traveled over the world and met international figures like Mahatma Gandhi. When Thurman asked Gandhi what message he should take back to US, Gandhi replied that he regretted not making nonviolence more known throughout the world. He also remarked that he hoped that the message of nonviolence would be delivered to the world through the civil rights movement. Thurman developed a deep appreciation for the value of nonviolent resistance, and he used this approach in his protest against institutionalized racism.
He eventually left his position at Howard in 1944, and helped the Fellowship of Reconciliation to establish the Church for the Fellowship of All Peoples in San Francisco. It became a major interracial, interdenominational church in the United States. Most of their members were African Americans who had migrated to San Francisco. The church also encouraged participation in the spiritual life, regardless of religion or ethnicity. He also inspired Martin Luther King Jr. and other youngsters who were committed to promoting social justice. He encouraged them to take part in the civil rights movement.
Howard Thurman was invited to Boston University in 1953 to take up the post of the dean of Marsh Chapel. This made him the first black dean of a chapel at a university where whites were in majority. Thurman left Boston University in 1965.
He also founded and directed the Howard Thurman Educational Trust which provided funding for college students in need. He remained a prolific writer and was a popular speaker as well. He also hosted a TV show.
His many books include ‘Jesus and the Disinherited’, ‘The Inward Journey’, and ‘With Head and Heart: The Autobiography of Howard Thurman’.
You May Like 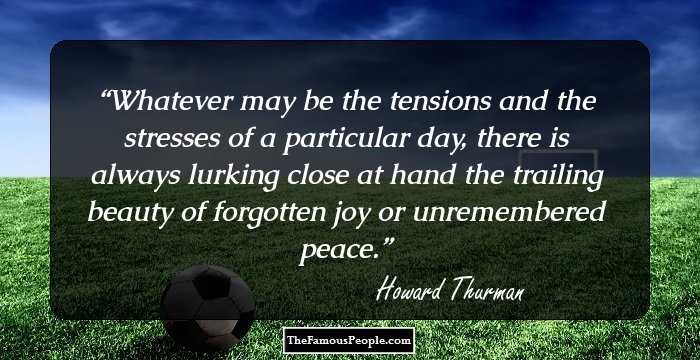 Quotes: Peace
Continue Reading Below
Family & Personal Life
Howard Thurman was born on 18 November 1899, in Florida, USA. His parents were Saul Thurman and Alice. He lost his father as a young boy of seven.
Howard Thurman was married to Katie Kelley from 11th June 1926, till her death. They had a daughter born in October 1927. Katie Kelley passed away in December 1930, due to tuberculosis.
Thurman married Sue Bailey on 12th June 1932. They had a daughter named Anne who was born in October 1933. Bailey was an author, lecturer, historian, and civil rights activists. She founded the ‘Aframerican Women’s Journal.’ She passed away in 1996.
Thurman passed away at the age of 81 on 10th April 1981, in San Francisco, California, USA.
Recommended Lists: 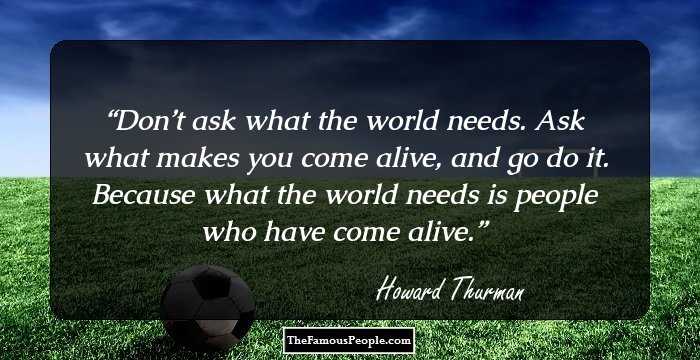 Quotes: You
Recommended Lists:
Intellectuals & Academics #906
You May Like

Quotes By Howard Thurman | Quote Of The Day | Top 100 Quotes