(American Civil Rights Activist Who Was Assassinated by a White Supremacist)

Advanced Search
Medgar Evers was an African-American civil rights activist from Mississippi, who worked tirelessly against racism throughout his life. He spent his childhood and most of his later life in Mississippi, a state where racism was rampant. He had to go to a far-off school that specifically admitted African-Americans and was subjected to racial taunts by the other white children. Even after serving in the army during World War II, Evers did not get the fair treatment he longed for. His leadership qualities came to the fore in college, where he was ‘junior class president’. Having already experienced first-hand the brutal repercussions faced by African-Americans in Mississippi, like lynching, Evers grabbed the chance to fight against it by joining the Regional Council of Negro Leadership (RCNL). He became actively involved with organizing protests and demonstrations against racism. He was denied admission by the University of Mississippi on racial grounds became the subject of a well-publicized campaign to end segregation at the University. Because of his relentless crusade against racism, he made many enemies with the violent and powerful white-supremacists. Just as his endeavours were appearing to bear fruits with President Kennedy’s landmark civil rights address, his life was tragically cut short. Till today, Evers is cherished as one of the foremost champions of the ‘Civil War Movement’. Angela Davis
DID WE MISS SOMEONE?
CLICK HERE AND TELL US
WE'LL MAKE SURE
THEY'RE HERE A.S.A.P
Quick Facts

American Celebrities
Civil Rights Activists
American Men
Male Activists
American Activists
Childhood & Early Life
Medgar Evers was born to James and Jesse Evers in Decatur, Mississippi. His father worked at a saw mill and owned a small farm.
He studied in a school for black children and walked 12 miles to go to school.
He joined the US army in 1943 and served there for three years, fighting at the ‘battle of Normandy’ and at ‘European Theatre’ during World War II. He was honourably discharged with the rank of a ‘Sergeant’.
He joined ‘Alcorn College’, a black college, in 1948. He majored in business administration and was involved in a host of extra-curricular activities such as debate, football, track teams, choir, etc. He was also the ‘junior class president’. 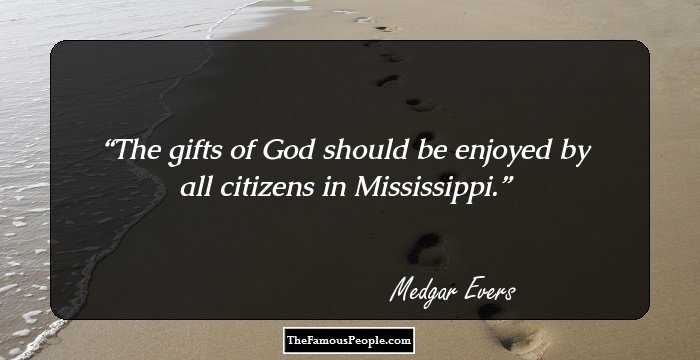 Continue Reading Below
Career
Evers graduated from college with a Bachelor of Arts degree in 1952 and moved to Mississippi, where he became a salesman for renowned civil rights activist T. R. M. Howard's firm, ‘Magnolia Mutual Life Insurance Company’. Howard mentored Evers in the following years regarding activism.
T.R.M Howard was the president of the ‘Regional Council of Negro Leadership’ or RCNL, a society that advocated civil rights among other things. Evers too got involved in RCNL and was among the organizers of boycott of service stations which forbade blacks from using the restrooms. He also attended RCNL’s yearly conferences.
In 1954, his application to the ‘University of Mississippi’ was rejected on racial grounds. Following this, the ‘National Association for the Advancement of Colored People’, or NAACP, started a campaign to stop segregation of the University. The same year, Evers became a field officer for NAACP in Mississippi.
In his capacity as the field secretary, Evers recruited more members for the NAACP and organized registration of voters. He headed protests against the companies with white owners that were discriminatory.
He opposed the legal system for being discriminatory towards crimes against the African Americans. He demanded a new investigation into the brutal murder of Emmett Till, a fourteen-year old African-American boy in Mississippi who was killed for flirting with a white woman.
In 1960, Evers objected to the staged conviction of civil rights activist Clyde Kennard on charges of theft.
He advised James Meredith in his efforts to get admission to the ‘University of Mississippi’. Eventually, Meredith became the first African-American to be granted admission to the University in 1962. However, his admission was followed by riots at the campus, leading to the death of two people. This increased the white supremacists’ hatred towards Evers.
He was a supporter of the Biloxi Wade-Ins, which were a series of protests that demanded African-Americans to be allowed everywhere on the beach in Biloxi. 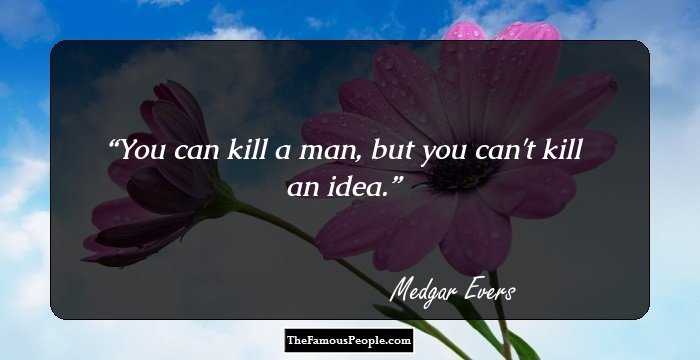 Quotes: Death
Continue Reading Below
Major Works
In 1954, he sent admission applications to the ‘University of Mississippi’ Law School. After his application was rejected on the grounds of his race, the NAACP started a campaign to stop segregation by the University, with Evers being the focus of the campaign. They received a boost with the ‘Brown v. Board of Education’ case which ruled racial segregation as unconstitutional.
Awards & Achievements
He was awarded the ‘Spingarn Medal’ by the ‘National Association for the Advancement of Colored People’ in 1963. 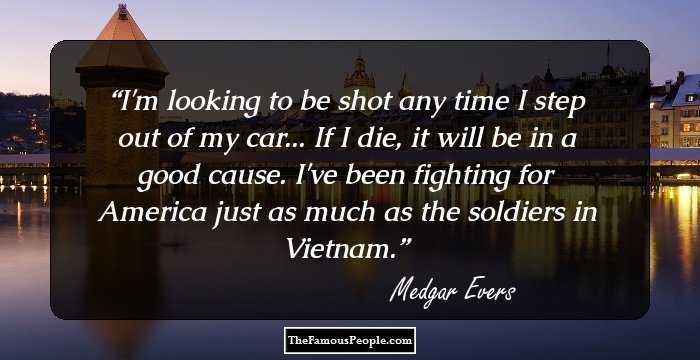 Personal Life & Legacy
In 1951, when he was still in college, he married his classmate Myrlie Beasley. The couple had three children, Darrell Kenyatta, Reena Denise and James Van Dyke. His wife was also an activist.
Following Evers’ public campaigns against racism, he and his family were threatened many times by white supremacists. In 1963, the ‘Molotov Cocktail’, a kind of firebomb, was thrown inside his house but luckily his family escaped unhurt. Later that year, someone tried to run down Evers with a car.
He was assassinated by white supremacist ‘Byron De La Beckwith’, a member of the ‘White Citizens' Council’.
His wife Myrlie Evers co-authored the book ‘For Us, the Living’, which was adopted into the film ‘For Us the Living: The Medgar Evers Story’. The film was released in 1983 as a tribute to Medgar Evers.
The city of Jackson, the capital of the state of Mississipi, has a statue of Evers, a part of its highway is named after him and the city’s airport is also named after this prominent activist.
Trivia
This African-American civil rights activist was not allowed to vote in the local elections as a mob of about 200 white men blocked his way to the poll.

Quotes By Medgar Evers | Quote Of The Day | Top 100 Quotes

See the events in life of Medgar Evers in Chronological Order