Advanced Search
Angela Yvonne Davis is considered to be a distinguished social and political activist of the United States. She has made a huge contribution in the uplifting of the political and social conditions of black in the American society. She was born and brought up in Alabama by her upper middle class parents, who were also in political scene of their times. Davis has studied in New York, Frankfurt and Massachusetts, where she polished her already existing communist ideas in her mind. She started as an associate professor at the University of California in the subject of philosophy and side by side got involved in the Communist Party USA and the Black Panther Party. It was in the 1970s that Davis got in trouble with the law when one of her subject of study, a young black boy who was imprisoned, tried to escape from the jail and was found with a weapon that was claimed to have been given to him by Davis. She tried to flee the law but was caught and put in the jail until all of the charges on her were withdrawn. Davis has been a keynote speaker on the issues of feminism, condition of the prisoners in the jails of United States and the liberation of gays and lesbians at many renowned universities and institutions since that incident. American People
African American Authors
Writers
Political Activists
Civil Rights Activists
Childhood & Early Years
Angela Davis was born on 26 January 1944 in Birmingham, Alabama to Frank Davis and Sallye Davis. She belonged to a well to do black family. Her father owned a service station and her mother was a elementary school teacher.
She has two brothers and a sister and she graduated from the Parker High School in Birmingham, Alabama. Her mother was into politics when she was growing up, so she was always surrounded by thinkers and activists. 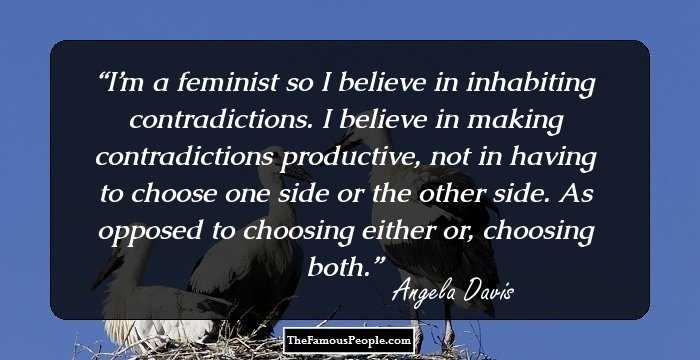 American Women
Brandeis University
University Of California, San Diego (UCSD)
Women Writers
Career
In 1959, Davis went to New York to broaden her educational horizons and attended the Elizabeth Irwin High School in Greenwich Village. She was introduced to the concept of communism here and made her think of racism and poverty.
In 1961, she attended the Brandeis University, Waltham, Massachussetts. She was one of the few black students here and felt isolated psychologically. She became increasing interested in the subject of philosophy here.
In 1962, she went to Europe to be a part of the Eighth World Festival for Youth and Students in Finland. She took this up as an opportunity to meet up revolutionary scholars like herself in the festival.
After studying for a few years in the University of Frankfurt, in 1969 Davis worked as an assistant professor of philosophy at the University of California, Los Angeles. She became a member of the Communist Party USA and joined the Black Panther Party.
At UCLA, the Board of Regents kept trying to get Davis fired from her post because of her association with the Communist Party USA. They were finally able to do it in 1970 - Davis was fired from UCLA for using inflammatory language.
In 1971, it was claimed that Davis provided weapon in the prison to a seventeen year old black prisoner called George Jackson, who was killed in an encounter while trying to escape from the prison in San Quentin.
After this incident and charges on her, Davis went on a run and was listed in the most wanted criminals’ list by the FBI. She was arrested in New York but all the charges on her were withdrawn after the trial.
In 1972, Davis resumed teaching at the San Francisco State University, even though she was barred from teaching at big universities after charges on her.
From 1975-1977, Davis worked as the lecturer of African-American studies at the Claremont College and later went on to teach women and ethnic studies at the San Francisco University.
Continue Reading Below
In 1979, Davis was awarded the Lenin Peace Prize in Soviet Union and was made the honorary professor at the Moscow State University.
In 1980, she became the vice-president of the Communist Party. She urged the people of United States to revolutionize with realism and tried to convince the radicals to accumulate support for the Democratic Party.
She was again elected as the vice-president of the Communist Party in 1984 and wrote many books on activism. Her main focus of social work was the state of prisoners in the United States.
In 1995, Davis formed the African American Agenda 2000 to alliance Black Feminists after she opposed the Million Man March, opposing the absence of women from the event.
In 2003, she gave a lecture at the Agnes Scott College, talking about the unfairness of the death penalty, bringing reform in the prisons, issues of the minority in the society and the backdrops of the criminal justice system in the US.
In 2007, she started teaching 'History of Consciousness' at the University of California, Santa Cruz. She was also the commencement speaker at Grinnell College.
In 2008, Davis gave a lecture at Howard University and was the closing keynote speaker at the Midwest Bisexual Lesbian Gay Transgender Ally College Conference. She also spoke on Gender studies in College of Charleston.
In 2009, she was the keynote speaker at the Martin Luther King Commemorative Celebration at the Louisiana State University. She was also a speaker at the University of Virginia Carter G. Woodson.
In 2010, Davis spoke at the Trinity University, Texas on the occasion of MLK Day Celebration. She expressed her goals for shutting down prisons altogether at the conference.
Continue Reading Below
In 2012, Davis gave a Commencement Address at the Pitzer College, Claremont and was awarded with the Blue Planet Award for her work in the field of humanity and the welfare of the planet in the same year.
In 2013, she delivered a speech at Gustavus Adolphus College, Saint Peter, MN on the issues of prison in the United States and also spoke at the 18th Annual Building Bridges Conference. 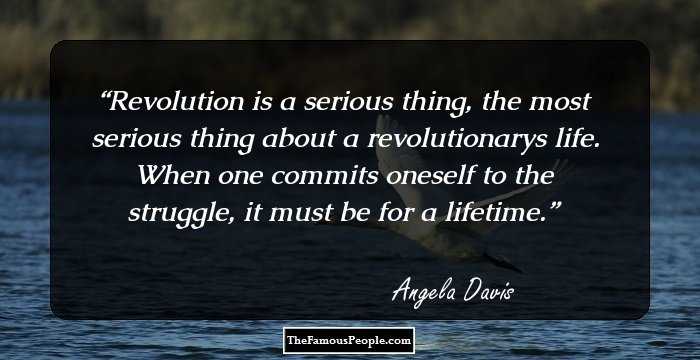 Aquarius Writers
Women Activists
American Writers
American Activists
Personal Life & Legacy
Davis declared herself a lesbian in Out magazine in the later 60s. She has worked for the rights and acceptance of gays, lesbians and transgender in the society.
Recommended Lists:

American Female Writers
American Women Activists
Women Political Activists
Women Civil Rights Activists
Trivia
There is a song written on Davis called ‘Angela’ and it was sung by John Lennon and Yoko Ono in 1972 and was included in Lennon’s album ‘Some Time in New York City’.
Todd Cochran has also recorded a song on Davis called ‘Free Angela (Thoughts… and all I’ve to say).
Rolling Stones’ song ‘Sweet Black Angel’ was dedicated to her.
Davis spent many months in the jail in 1971.
She thinks of Cuba as a racism-free country. 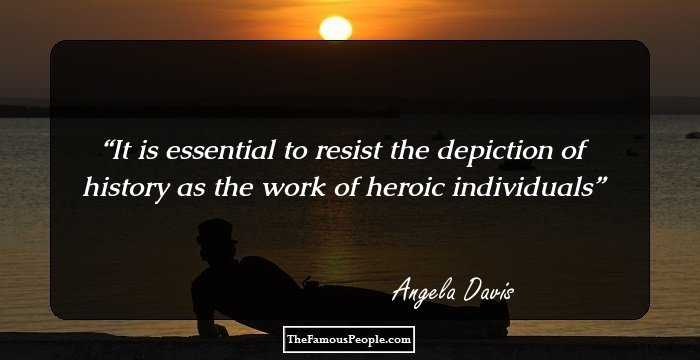 Quotes By Angela Davis | Quote Of The Day | Top 100 Quotes

See the events in life of Angela Davis in Chronological Order