Advanced Search
Often considered as one of the most significant leaders of African-American Muslim citizens, Malcolm X did his part to inspire many black people across the United States to strive for personal freedom. His resolution to inspire African-Americans was made in his childhood when his father was seemingly killed by the white people, leaving Malcolm an orphan. Also, as a kid, his teachers showed no confidence in him despite his exceptional academic performance. His dream of becoming a lawyer was shattered when it was suggested that carpentry would be a better profession for a black man. Initially inspired by his stepsister Ella, he found himself employment, but soon took to unfair means of earning money. During his term at the prison, he was introduced to the tenets preached by the religious organization, 'Nation of Islam.' He was highly motivated by the teachings of Elijah Muhammad, proceeding to spread the same message to others. He soon became famous, but was also often the subject of scrutiny for his controversial comments. It was only after leaving the 'Nation of Islam' that he worked hard to attain unity, and gained popularity. He also earned his share of enemies, who eventually assassinated him during one of his public addresses. Even today, this activist is held in high regard by some of the most distinguished human rights leaders. Sacheen Littlef...
DID WE MISS SOMEONE?
CLICK HERE AND TELL US
WE'LL MAKE SURE
THEY'RE HERE A.S.A.P
Quick Facts

American Celebrities
Civil Rights Activists
American Men
Tall Celebrities
Tall Male Celebrities
Childhood & Early Life
Malcolm Little was born on May 19, 1925, in Omaha, Nebraska, United States, to Earl, a local political leader belonging to the 'Universal Negro Improvement Association' (UNIA), and his wife Louise Helen.
Because of the volatile black-white conflict in the region, the family soon shifted to Wisconsin's largest city, Milwaukee, in 1926. Despite moving to Milwaukee the family wasn't safe, and Earl, being an active political leader, invited trouble from white racists.
Within a few years, Earl died in a car accident, but his wife believed that there had been foul play. She claimed that he had been killed by the white members of an organization called 'Black Legion.'
During 1937-38, Malcolm's mother Louise suffered from depression after being cheated on by her boyfriend who had left her pregnant. She had to be hospitalized, and her children had to be raised by different foster families.
A young Malcolm was a brilliant student in school. He was popular among his friends, even though he was the only black in the class. However, one day when he expressed his dream of pursuing law in future, his teacher discouraged him saying that dreaming big for a black was irrational. This caused Malcolm to quit school, and start work as a shoeshine boy.
Eventually, Malcolm Little got drawn towards antisocial activities like smuggling drugs, gambling, and stealing, which led to his arrest and a long sentence in prison. 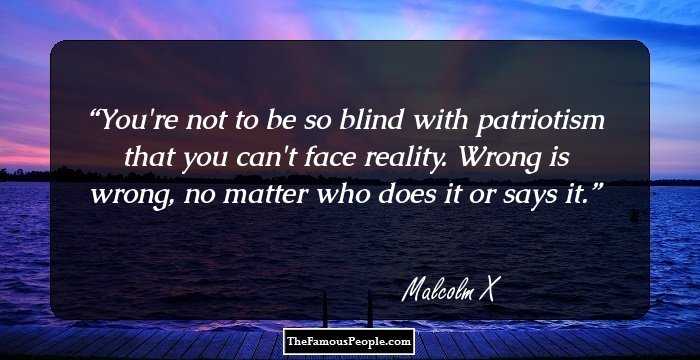 Quotes: You
Continue Reading Below
Later Life
While serving his sentence at the 'Charlestown State Prison' in Boston, Massachusetts, he was motivated by his brothers and sisters to join the 'Nation of Islam,' a Detroit-based religious organization. Despite initial hesitation, he joined the religious organization.
In 1948, his brother Reginald introduced him to the leader of the 'Nation of Islam,' Elijah Muhammad. Subsequently, the religious chief played a major role in Malcolm’s life.
In 1950, he claimed to be a communist. In correspondence to the US President Harry S. Truman, he spoke of how he was against the 'Korean War.' He stopped using the name ‘Little’ as he believed that the surname was given to his ancestors by white people who had enslaved the black.
Malcolm was let out on parole in 1952, during which he met the religious leader, Elijah Muhammad. For the next two years, he served as the head of mosques, known as Temple Number 1, 11, 12, and 7. As one of the prominent personalities of the 'Nation of Islam,' he set up mosques in various places like Springfield, Hartford, and Atlanta.
In 1957, this political leader came under the scrutiny of New York police when he stood up against the arrest of his colleague Johnson Hinton from the ‘Nation of Islam.’
As a member of the 'Nation of Islam,' he preached whites were reincarnations of the devil, and that the blacks were the only natives of the world. He was also convinced that the ‘white race’ would eventually die out, leaving the blacks as the sole rulers of the world.
These teachings did not make him favorable to the whites, and to some blacks. He came across as prejudiced and was considered by many as a hindrance to peaceful relations between members of the two races.
He showed open contempt for civil rights rallies and movements, calling Martin Luther King Jr. a fool, and claiming that George Washington hated black people. He went against the goals of civil rights organization by demanding a separate nation for the blacks, rather than working towards racial integration.
Towards the end of the decade, he had chosen another name for himself, Malik el-Shabazz, and was becoming quite famous. In 1959, he appeared on the documentary, 'The Hate That Hate Produced,' which spoke about the 'Nation of Islam' and its leaders.
Continue Reading Below
In 1960, he attended the 'United Nations General Assembly,' which was held at New York City. It was here that he got acquainted with famous African leaders like Gamal Abdel Nasser, Ahmed Sékou Touré, and Kenneth Kaunda. He also built a rapport with the communist luminary Fidel Castro, who invited Malcolm to Cuba.
Based on Malcolm X's discourse, many black extremists led revolutionary movements like the 'Black Arts' and the 'Black Power.' With Malcolm’s growing popularity amongst the supporters of the 'Nation of Islam,' Elijah Muhammad grew envious, harboring hatred for the former.
On March 8, 1964, Malcolm X declared that he has decided to quit the 'Nation of Islam' to follow the teachings of Sunni Islam. He blamed his mentor Muhammad for helping him form his biased ideas and instigating his hatred for civil rights campaigns.
After quitting the 'Nation of Islam,' he strived to establish racial integration in America, working alongside activists like Martin Luther King Jr. He went on to establish the 'Organization of Afro-American Unity.' 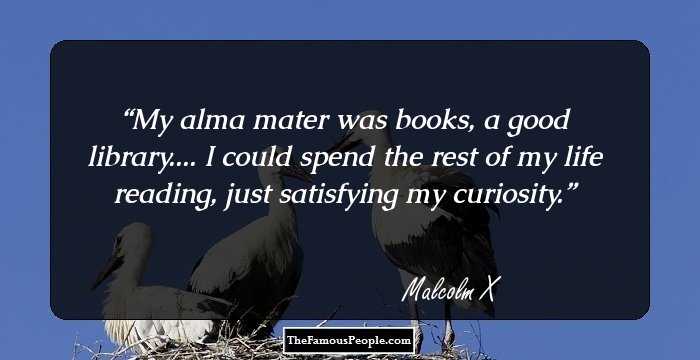 Quotes: Life, Books, I
Major Works
In 1964, Malcolm founded the 'Organization of Afro-American Unity' with the goal of promoting human rights for African-Americans, and bringing about cooperation between Africans across the United States.
Personal Life & Legacy
Malcolm met Betty Sanders in 1955, while delivering his lecture at a 'Nation of Islam' gathering. Sanders started attending his lectures regularly, and the two fell in love with each other.
Malcolm got married to Sanders, who is also known as Betty X, in 1958. The couple was blessed with six daughters, Gamilah Lumumba, Qubilah, Attallah, Ilyasah, Malaak, and Malikah.
Upon leaving the 'Nation of Islam,' Malcolm received several threats to his life, and was finally assassinated on February 21, 1965, during a speech at the 'Audubon Ballroom' in Manhattan.
The leader was rushed to the 'Columbia Presbyterian Hospital,' where the post-mortem revealed 21 gunshots aimed at him. Three of the conspirators were identified as Talmadge Hayer, Norman Butler, and Thomas Johnson, members of 'Nation of Islam.' Of them, Hayer was one of the assailants, but the identities of the others were unknown.
Malcolm's funeral service was held at Harlem's 'Unity Funeral Home,' and was attended by eminent people like John Lewis, Andrew Young, James Farmer, and Ossie Davis among others. 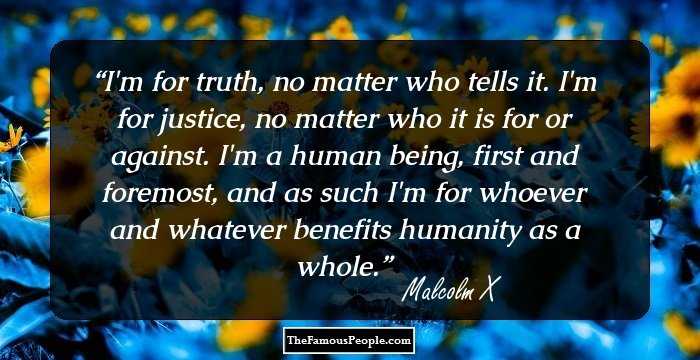 Trivia
This famous leader of America's 'Nation of Islam' inspired boxing champion Muhammad Ali to join the organization. Gradually, the two became good friends.
Malcolm X began working with acclaimed author Alex Haley on an autobiography in the early-1960s. The book was about Malcolm X's life experiences and his evolving views on racial pride, Black Nationalism, and pan-Africanism. The autobiography was published in 1965 after his assassination.

See the events in life of Malcolm X in Chronological Order