Hermann Minkowski was a renowned German mathematician. His contribution to the development of modern mathematics is immense. The development of the theory on the geometry of numbers is his well known work. He utilized this theory very skilfully in solving problems of number theory, mathematical physics and the theory of relativity. This geometric method helped him to understand the theory of continued fractions and to generalize it into an algorithm. Personalities like Albert Einstein were his student. Minkowski’s theory of four-dimensional space-time which is better known as “Minkowski space”, aims to prove that the special theory of relativity that Albert Einstein presented algebraically, can be understood geometrically also. He discussed about this theory through his book “Space and Time”. The works of Einstein and Minkowski establish the fact that space and time are closely interlinked. This theory of four-dimensional space-time later provided an inspiration for Einstein’s work on general relativity. In this context, it will not be out of place to mention that Hendrik Lorentz’s analysis of transformations of space and time was the inspiration of his idea of the unity of space and time. Besides pursuing his mathematical research, he taught mathematics at several prestigious universities such as University of Bonn, Konigsberg University and the University of Gottingen. Cause of Death: Appendix

German Celebrities
Male Scientists
Cancer Scientists
German Scientists
German Mathematicians
Childhood & Early Life
Hermann Minkowski was born in Aleksotas, Kingdom of Poland, as the son of Polish Jews parents Rachel and Lewin Minkowski. His father was a businessman.
He received his early education at home till the age of seven.
His parents shifted to Germany and settled in Konigsberg in 1872. He converted himself to Protestantism for educational purpose.
He received his school education at the Altstadtisches Gymnasium in Konigsberg.
In April 1880, he took admission at the University of Konigsberg.
Later, he spent the winter semester of the academic year of 1882 to 1883, at the University of Berlin. During this time, he developed an interest towards quadratic forms of mathematics.
In 1885, he obtained his doctorate degree from Konigsberg University under the guidance of Ferdinand von Lindermann, a renowned German mathematician. After that, he undertook obligatory military service. 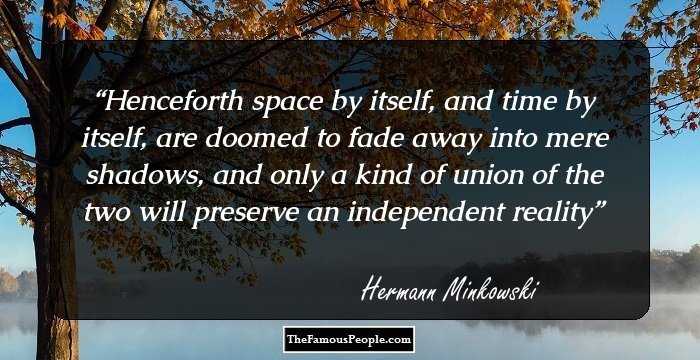 Quotes: Time, Will
Continue Reading Below
You May Like

The Sexiest Men Of 2020, Ranked
Career
In 1887, he joined the University of Bonn as a non-salaried lecturer. At that time, he submitted a paper namely “Spatial visualization and minima of positive definite quadratic forms” at the University.
Gradually, he became the assistant professor at the University of Bonn in 1892. During this time, he worked on the motion of solids immersed in perfect liquid which was a part of mathematical physics.
After two years, he returned to Konigsberg University where he taught for two years. After that, the Eidgenossische Polytechnikum Zurich appointed him for a teaching position.
At Zurich he interacted with the students of engineering and mathematics. Here, he delivered lectures on a number of topics like potential theory, hydrodynamics, theory of functions and so on.
In 1902, he accepted a chair at the University of Gottingen. He served in this position till his death. At that time, he became interested towards the study of mathematical physics.
In 1905, he took part in a seminar on electron theory and acquired latest knowledge about electrodynamics. It was during this time when he put forward an advanced view about space and time by introducing the theory of relativity.
He, for the first time, realised the importance of the Lorentz transformation idea regarding space and time. Earlier, physicists were unaware about the geometrical implications of Einstein’s special theory of relativity.
Minkowski’s hard work resulted in the theory of a four-dimensional treatment of electrodynamics. In 1907, he published his work “Diophantische Approximationen: Eine Einfuhrung in die Zahlentheorie”.
Major Works
In 1896, he propounded his theory on geometry of numbers. This theory is applicable in functional analysis and Diophantine approximation. Through geometrical theory, he solved problems in number theory.
Awards & Achievements
In 1883, the French Academy of Sciences conferred him the Mathematics Prize for his manuscript on the theory of quadratic forms. Quadratic forms have wide usage in different branches of mathematics like linear algebra and number theories.
Personal Life & Legacy
He got married to Auguste Adler in 1897. They had two daughters namely Lily and Ruth.
He died unexpectedly of appendicitis at the age of 44 in Gottingen. To honour his contribution, the asteroid ‘12493 Minkowski’ and ‘M-matrices’ are named after him.
After his death, renowned physicists like Max von Laue and Arnold Sommerfeld extended his idea of space and time. In 1911, Lau published a textbook on the special theory of relativity and it was the first textbook that used the formulation of Minowski.
You May Like

See the events in life of Hermann Minkowski in Chronological Order