Karl Theodor Wilhelm Weierstrass was a German mathematician, who for his contributions to mathematics is often regarded as “the father of modern analysis.” Because of his amazing skills in the field of mathematics, he gained wide recognition all over the world. Even though he had to leave the University of Bonn without completing his graduation and getting his degree, he continued his studies at the University of Munster, eventually becoming a teacher, not only of mathematics, but also of physics, botany and gymnastics. It was Weierstrass, along with Augustine Cauchy, who had stated the modern analysis theory, which was one of his major achievements in his career. The first detailed definitions of fundamental concepts like differentiability, limit, continuity and convergence were also given by him. In the year 1854, he achieved the biggest success of his career, as well as fame worldwide, with the publication of a paper providing the solution of inversion of hyper elliptic integrals. He also helped devise the Weierstrass-Erdman condition, which gives sufficient conditions for an extreme to have a corner along a given extreme, as well as allows one to find a minimizing curve for a given integral.
Continue Reading Below German People
Male Scientists
Scorpio Scientists
German Scientists
German Mathematicians
Childhood & Early Life
Karl Weierstrass was born on 31 October 1815, in Ennigerloh, Kingdom of Prussia. His father Wilhelm Weierstrass worked as a secretary to the Mayor of Ostenfelde. His mother was Theodora Vonderforst.
He got interested in mathematics at a very early age while studying in secondary school. He attained an unexpected level of excellence in the subject at a young age.
He attended the University of Bonn at the behest of his father as he wanted Karl to prepare for a government position. Since his studies were in the fields of law, economics and finance, he found himself in conflict with what he actually wanted to study: mathematics. This led to him paying less heed to his university education and he continued to study mathematics in private. This led to a terrible outcome, as he had to leave the university without a degree.
After that, he attended the university of Munster, which is a public university located in the city of Munster, North Rhine-Westphalia in Germany. At that time, it was quite reputed in the field of mathematics. After studying in a teacher training school, he finally managed to become a certified teacher in the city.
During his period of student life, he also used to attend lectures of German mathematician, Christoph Gudermann, famous for introducing the Gudermannian function as well as the concept of uniform convergence. He later became Karl’s teacher, after Karl found himself quite interested in elliptic functions. 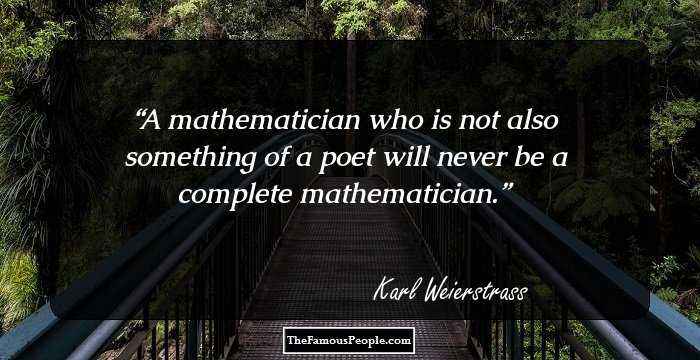 Quotes: Never, Will
Continue Reading Below
You May Like

The Sexiest Men Of 2020, Ranked
Career
Karl Weierstrass started teaching in Deutsch Krone in West Prussia from 1843. He taught at the Lyceum Hosianum in Braunsberg from 1848. Besides mathematics, he taught physics, botany and gymnastics as well.
During this period, his salary was so meager that it did not even allow him to correspond with his fellows. Still, not only did he work unceasingly on analysis, but he also carried out a program known as the arithmetization of analysis. Under this program, analysis was based on a rigorous development of the real-number system. He later managed to develop a function that, though continuous, had no derivatives at any point.
He was interested in calculus of variants, in which he made important achievements. By using the apparatus of analysis, he formed the calculus of variants theory, which gave way to the modern day calculus of variations. Among his various contributions, the establishment of the necessary condition of strong extrema of variational problems was the most remarkable one.
The erroneous belief that a continuous function must be differentiable at most points was corrected by Weierstrass. He surprised his contemporaries by providing an example himself of a continuous function that has a derivative at no point x of the real line.
Later, at the age of 40, Karl Weierstrass managed to get appointed to an academic position in the University of Berlin. Because of his brilliant teaching in the field of mathematics, he exerted a great influence there and attracted gifted students from around the world. However, these lectures were never published though his contributions were widely disseminated by his listeners.
His memoir on Abelian functions was published in the ‘Crelle’s Journal’ in 1854, which he considered another great achievement. He was conferred an honorary doctorate by the University of Königsberg, and later in 1856, a position was also offered at the Royal Polytechnic School in Berlin. Over the following years, he contributed a few papers to scholarly journals as well.
Many famous personalities such as philosopher Edmund Husserl and mathematician Carl Johannes Thomae were taught by Weierstrass. 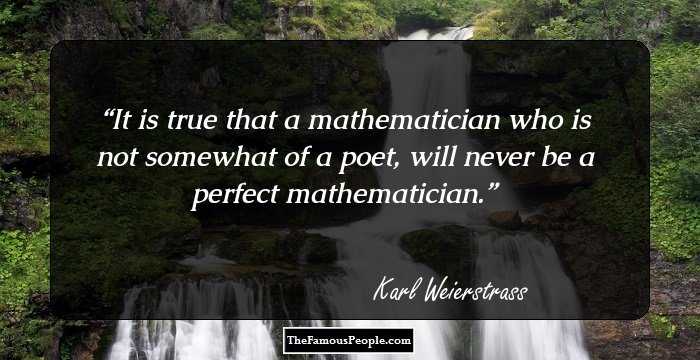 Quotes: Never, Will
Major Works
Karl Weierstrass devised tests for the convergence of series (Weierstrass M-test) and contributed to the theory of periodic functions, functions of real variables, elliptic functions, Abelian functions, converging infinite products, as well as the calculus of variations. The theory of bilinear and quadratic forms was also advanced by him.
Continue Reading Below
Among Weierstrass’ major published works on mathematics were the ‘Zur Theorie der Abelschen Funktionen’ published in 1854 and the ‘Vorl, ueber die Theorie der Abelschen Transcendenten’, published posthumously in 1902.
Awards & Achievements
Karl Weierstrass was conferred an honorary doctorate by the University of Königsberg in 1854.
He was made a Fellow of the Royal Society in 1881, and awarded the Royal Society Copley Medal in 1895. 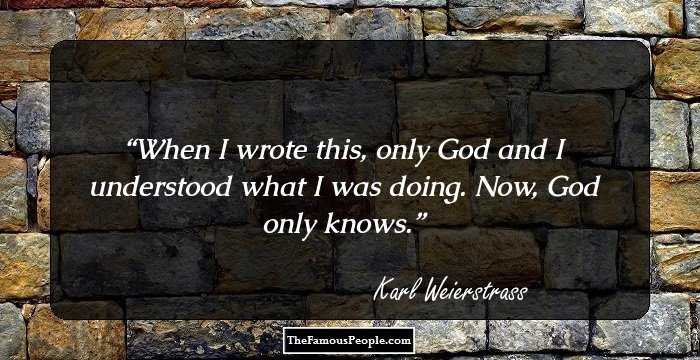 Quotes: God, I
Personal Life & Legacy
Though Karl Weierstrass didn’t marry during his lifetime, he supposedly had an affair with the widow of his deceased friend Carl Wilhelm Borchardt, who was also a German mathematician. He also supposedly had an illegitimate child with her. However, there is no reliable evidence to prove so.
He began to lose his health and suffer from constant dizziness from the beginning of 1850. This led to him discontinuing taking classes for a long time. Even when he was appointed by the University of Berlin, he had to wait for some years to formally occupy the position because of his illness.
However, in spite of his illness, he not only managed to continue taking classes, but he also took the reputation of the university to new heights.
Towards the end of his life, he became completely immobile. He passed away of pneumonia on 19 February 1897. He was 81.
The lunar crater Weierstrass and the asteroid 14100 Weierstrass have been named after Karl Weierstrass.
In Berlin, an institute has also been named after him, which is known as the ‘Weierstrass Institute of Applied Analysis and Stochastics.’
You May Like

See the events in life of Karl Weierstrass in Chronological Order