(German Mathematician Who Founded the Theory of Elliptic Functions)

Carl Gustav Jacob Jacobi was a German mathematician who co-founded the theory of elliptic functions. A child prodigy, Jacobi developed an affinity for mathematics from a young age. He received his early education in mathematics from his uncle Lehman who home schooled him. His remarkable abilities and excellence at the subject reflected at an early age—at twelve, he was ready for university level of studies. However, due to age restrictions, he entered Berlin University, at the age of 16, in 1821. Attaining his doctorate degree, Jacobi took up the profile of a university professor, a position which he served for the better part of his life. It was while serving as a mathematics professor that he made fundamental contributions to elliptic functions, dynamics, differential equations and number theory. He penned a vast amount of manuscripts, some of which were published in his lifetime and some posthumously. Interestingly, born with a Jewish parentage, Jacobi turned himself into a Christian to qualify for a university position Bernhard Riemann
DID WE MISS SOMEONE?
CLICK HERE AND TELL US
WE'LL MAKE SURE
THEY'RE HERE A.S.A.P
Quick Facts

German People
German Men
Humboldt University Of Berlin
Male Scientists
German Educators
Childhood & Early Life
Carl Gustav Jacob Jacobi was the second of the four children born to banker Simon Jacobi on December 10, 1804 in Potsdam. He belonged to Ashkenazi Jewish ancestry. His elder brother Moritz von Jacobi went on to become an engineer and physicist.
Jacobi was initially tutored by his uncle, Lehman who taught him the basics of classical language and elements of mathematics. Only at the age of twelve did Jacobi enter Potsdam Gymnasium for a formal schooling.
At the Gymnasium, Jacobi was taught classical languages, German history as well as mathematics. It was due to the first-rate education received from his uncle that he excelled in all divisions so much so that he was promoted to senior year within six months.
Though young Jacobi was learned enough to enter university, the minimum age requirement of sixteen years prolonged his university admission. He stayed in the senior class until 1821.
It was while at the senior class that he employed his time to advance his knowledge in other subjects, namely philology, history, mathematics and languages, Latin and Greek. He made a first-hand attempt at research by solving quintic equation through radicals.
In 1821, he enrolled at the Berlin University. In the initial year, he juggled between his love for philology and mathematics. He caught the attention of his professors with his knowledge and understanding of the subjects.
Since the university taught low level of mathematics, he continued with his private study of the more advanced works of Euler, Lagrange and Laplace. In 1823, he finally gave up on philology to pursue his first love, mathematics.
In 1823, he was qualified as a secondary school teacher for the subjects, mathematics, Greek and Latin. Subsequently, he was offered a position at the Joachimsthal Gymnasium in Berlin but he declined it to pursue a university position.
In 1825, he secured a doctorate degree in philosophy. His thesis provided an analytical discussion on the theory of fractions. Same year, he gave up on his Jewish roots and converted to Christianity so as to qualify for a university position. 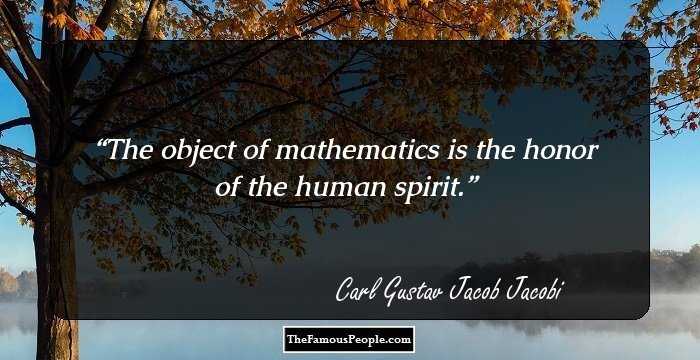 Continue Reading Below
Career
Following his faith conversion and doctorate degree, Carl Gustav Jacob Jacobi was offered a teaching position by Berlin University for the 1825–26 academic year. He taught the theory of curves and surfaces.
In 1827, he was appointed mathematics professor at the Königsberg University. Two years later, he became a tenured professor, a position which he served until 1842.
He gained fame for his work on elliptic functions and their relation to elliptic theta functions. His research and findings were enthusiastically received by the great French mathematician Adrien Marie Legendre.
Jacobi was the first mathematician to formulate a theory of elliptic functions based on four theta functions. Theta functions have great importance in mathematical physics because of their role in inverse problem for periodic and quasi-periodic flow.
In 1829, his findings in elliptic functions were published in the treatise ‘Fundamenta nova theoriae functionum ellipticarum’ (New Foundations of the Theory of Elliptic Functions).
He made an important discovery that just as elliptic functions can be obtained by inverting elliptic integrals, same way hyperelliptic functions can be obtained by inverting hyperelliptic integrals. This discovery eventually led to the formation of the theory of Abelian functions
In his 1835 paper he discovered fundamental properties of theta functions which included the functional equation and Jacobi triple product formula. The paper also included results from q-series and hypergeometric series.
He was the first to apply elliptic functions to number theory. He took C. F. Gauss’s work forward by bringing to light new proofs of quadratic reciprocity. He not just introduced Jacobi symbol but contributed to higher reciprocity laws, investigations of continued fractions, and the invention of Jacobi sums.
He was one of the early founders of the theory of determinants. He invented the functional determinant formed of the n2 differential coefficients of ‘n’ given functions of ‘n’ independent variables. The determinant has played an important part in many analytical investigations and bears his name.
Continue Reading Below
In 1843, he had a mental breakdown. He took a break and moved to Italy to recuperate. Following year, he returned to Berlin and henceforth lived as a royal pensioner until his death.
In the 1848 Revolution, Jacobi became politically involved. He announced his candidature for the Liberal club. It was during this time that he addressed an imprudent speech which cost him his royal pension after the suppression of the revolution. However, due to his renowned fame and status, the pension was restored.
In his lifetime, he carried out important research in partial differential equations of the first order and applied them to the differential equations of dynamics. His 1866 work 'Vorlesungenüber Dynamik' relates his work with differential equations and dynamics. The Hamilton-Jacobi equation now plays a significant role in the presentation of quantum mechanics.
He also made important contributions in the field of planetary theory. At the time of his death, he left vast amount of manuscripts excerpts from which were published in Crelle’s Journal. The Berlin Academy published his ‘Gesammelte Werke; (1881-91).
Major Works
Jacobi, through his treatise ‘Fundamenta nova theoriae functionum ellipticarum’ and later papers in ‘Crelle's Journal’, made revolutionary discovery in the field of elliptic functions. His theory of elliptic functions based on four theta functions has great importance in the field of mathematical physics.
Another important discovery made by him is his research in differential equations and their application to the differential equations of dynamics. He was also one of the early founders of the theory of determinants. He invented the functional determinant, which now bear his name.
Awards & Achievements
In 1836, he was elected as a foreign member of the Royal Swedish Academy of Sciences.
Personal Life & Legacy
Carl Gustav Jacob Jacobi died due to small pox on February 18, 1851. He was buried in Berlin.
Due to his eminence as a great German mathematician, his grave has been preserved at a cemetery in the Kreuzberg section of Berlin, the Friedhof I der Dreifaltigkeits-Kirchengemeinde (61 Baruther Street).
A crater on the moon has been named after him. Several theorems, equations, algorithms, sums, polynomials, symbols and functions in mathematics bear his name thereby acknowledging his vast contribution to the field.
Trivia
Jacobi was the first Jewish mathematician to become a professor at a German university.