Henry David Thoreau was an American writer, poet and a transcendentalist thinker, most famous for his classic book ‘Walden’. A complex man with a fondness for simple living, he is known for his philosophical and naturalist writings. Born to a poor family in Concord, Thoreau received his elementary education from the Concord Academy and graduated from Harvard University. Subsequently, he taught at school for some time while pursuing his love for literature and nature alongside. He often used to wander among the woods and forest, observing the natural surroundings closely. Enchanted by nature’s beauty and persistent on exploring a simple life, in 1845, Thoreau went to live at a small cabin near Walden Pond, owned by his dear friend and writer Ralph Waldo Emerson. While staying there, Thoreau pursued his philosophical interests while recording his experiences which he later published in his masterpiece ‘Walden’. After having completed his experiment, Thoreau returned to Concord in 1847 and spent the later years primarily working on ‘Walden’ in order to publish it. In addition to being an author, he opposed the government for waging the Mexican war and also became known for his beliefs in Transcendentalism and civil disobedience. Although, he died in his forties due to illness, Thoreau’s books, articles, essays, travel journals, and poetry still captivate readers with its philosophical richness. An eminent writer with a noble persona, Thoreau intended to discover and spread the true meaning of life, a quest which his readers continue to embark on, through his revolutionary works. American People
Naturalists
Philosophers
Non-Fiction Writers
American Men
Childhood & Early Life
Henry David Thoreau was born on July 12, 1817, in Concord, Massachusetts, U.S.A, to John Thoreau, a small businessman, and his wife, Cynthia Dunbar. He was the third of the four siblings, with an elder brother and sister, and a younger sister.
After receiving his early education from the Concord Academy, Thoreau earned a scholarship at the Harvard University in 1833. Upon completing his graduation in 1837, he taught at a grammar school in Concord for a while.
In addition to teaching, Thoreau also started writing for journals and eventually decided to pursue a career in literature. He was quite compassionate about nature and believed that the true meaning of life was hidden in its enchanting beauty.
Subsequently, he worked with his father in the pencil making business and later established a school with his brother, John, in 1838. He worked at the school for the next few years until the untimely death of John in 1842, an incident which had a deep impact on Henry. 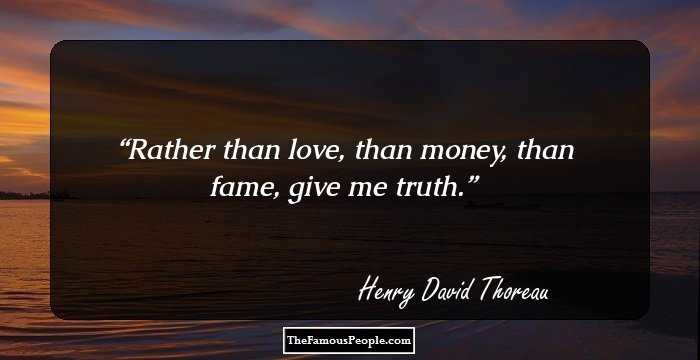 Quotes: Me, Love, Money
Continue Reading Below
Career
While at Concord, Thoreau became friends with his neighbour, Ralph Waldo Emerson, a renowned essayist and transcendentalist. Emerson introduced Thoreau to the other writers and thinkers of the era, and also invited him to live at his home as a caretaker.
Emerson acted as a mentor to Thoreau and helped him publish nature essays such as ‘Natural History of Massachusetts’ and ‘A Winter Walk’ in a quarterly periodical ‘The Dial’.
In 1843, Thoreau moved to Staten Island upon getting the job of a tutor but soon grew distasteful of the city life in New York and returned to Concord. Once back in his home town, he joined his family business and worked there for a couple of years.
In 1845, Thoreau decided to move away from city life and close to nature. He built a small cabin for himself on Walden Pond, on property owned by Emerson. He spent the next two years in the woods devoting most of the time to his philosophical and literary interests.
While at Walden, Thoreau recorded his experiences in the journal which he later refined and published in the classic book ‘Walden’. His experiences comprise of the various realities of life at Walden Pond, apprising the world about his simple yet revolutionary lifestyle and the true essence of living with leisure.
Upon returning from the cabin in 1847, Thoreau wrote observations on plant and wildlife in his native Concord and on his travels. In 1849, he published ‘A Week on the Concord and Merrimack Rivers’ which drew from his experiences from a boating trip he took with his brother John in 1839.
In the meantime, Thoreau also conducted several trips to the Maine woods, to Cape Cod, and to Canada. Subsequently, he recorded his travel experiences for a series of articles which he published over the next decade in different magazines.
In addition to being an outstanding transcendentalist, Thoreau also grew to be an abolitionist in his later life and held deeply felt political views, opposing slavery and the Mexican-American War. To support his cause, he wrote several influential works including his essays, ‘Civil Disobedience’ (1849) and ‘Slavery in Massachusetts’ (1854). 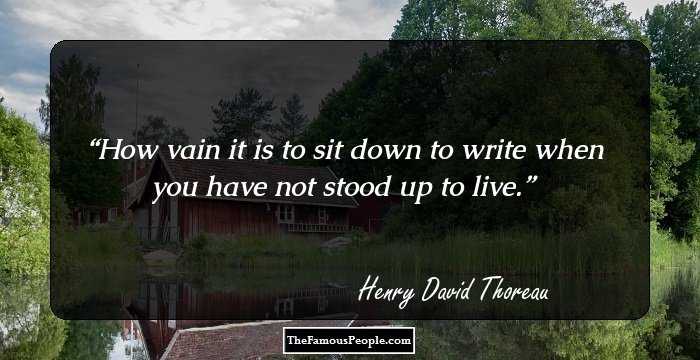 Quotes: You
Major Works
Published in 1854, Thoreau’s classic book ‘Walden’ or ‘Life in the Woods’ is considered to be one of the greatest literary works of all time. The book advocates about leading a life close to nature and with a minimum of distasteful labour. Over the years, the book has acquired a cult following, serving as an inspiration for the works of many naturalists and writers.
Being a keen abolitionist, in 1849, Thoreau published one of his most influential essays titled ‘Resistance to Civil Government’ or ‘Civil Disobedience’. The work inspired many leader activists, including Martin Luther King Jr. and Mahatma Gandhi, to adopt a non-violent approach against political and social injustice.
Personal Life & Legacy
In 1840, Thoreau fell in love with a girl named Ellen Sewall but she turned down his marriage proposal. Thoreau remained a bachelor for the rest of his life.
In 1835, Thoreau contracted tuberculosis which had a sporadic effect on his health in later life. In 1859, he fell ill with bronchitis with his condition deteriorating over the next few years.
Henry David Thoreau died after a long illness on May 6, 1862, at his home in Concord, Massachusetts, U.S.A., at the age of 44. 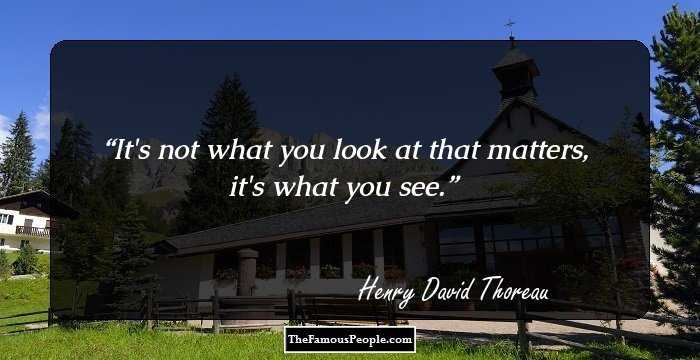