Gertrude Stein was a writer, poet and an ardent collector of Modernist art. She rejected the conventional style of early nineteenth-century literature and developed an abstract manner of expression that was similar to the work of the Post-Impressionists and Cubists in the visual arts. She spent a large part of her childhood in Europe and was able to develop a taste for the contemporary art and literature. When she moved to France with her brother, she collected a number of valuable pieces of painting which included Cubist works of Picasso and Gris, now regarded as masterpieces. Her residence in France became the destination, every Saturday, of talented writers and painters. When she started writing, her works were rejected by publishers and printers. Her eccentric style of writing poems was regarded as difficult, experimental and inaccessible. She held the view that “artists do not experiment” and most of her works were related to lesbianism, which was hard for the publishers to digest. The women's movement started a new interest in her poetry. Her memoir, ‘The Autobiography of Alice B. Toklas’ went on to become a literary bestseller. Since the 1970s, her works have attracted feminists as statements of rebellion against a male-dominated society. Scroll down and learn all about this prolific writer. MacKenzie Scott
Novelists #127
Writers #556
DID WE MISS SOMEONE?
CLICK HERE AND TELL US
WE'LL MAKE SURE
THEY'RE HERE A.S.A.P
Quick Facts

American Celebrities
Novelists
American Women
Harvard University
Women Writers
Childhood & Early Life
Gertrude Stein, the youngest of five children, was born in Allegheny, Pennsylvania to Jewish parents, Daniel, a wealthy businessman, and Amelia Stein.
When she was three years old, her family moved to Vienna and Paris and returned to America in 1878. They settled in Oakland, California, where she attended First Hebrew Congregation of Oakland's Sabbath school.
In 1892, after the death of her parents, she went to live with her mother’s sister, Fanny, in Baltimore. Here, she met the Cone sisters, Claribel and Ettaa, connoisseurs of modern French art.
She attended Radcliffe College, from 1893 to 1897 and was a student of psychologist William James under whose supervision Stein and fellow student, Leon Mendez Solomons, performed experiments on normal motor automatism
Encouraged by James, she reluctantly joined Johns Hopkins Medical School, where she became infatuated with Mary Bookstaver who was already in a lesbian relationship. Unhappy and demoralized, she left the course midway. 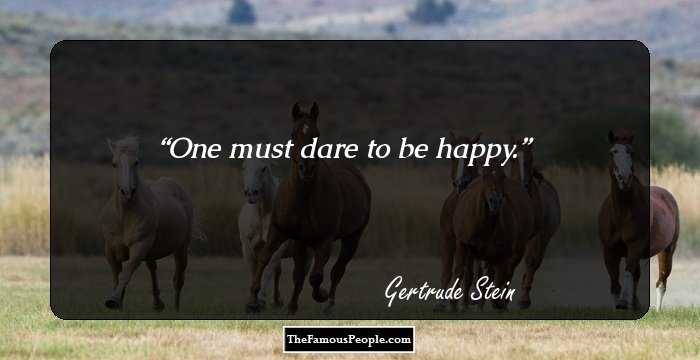 The Hottest Male Celebrities With The Best Abs
Career
In 1903, she relocated to Paris with her brother Leo hoping to pursue an art career. Their residence had an adjacent studio where here they accumulated the works of art into a significant collection.
Every Saturday, her residence hosted talents in modern literature and art, like Pablo Picasso, Ernest Hemingway, F. Scott Fitzgerald, Sinclair Lewis, James Joyce, Ezra Pound, Thornton Wilder, Sherwood Anderson and Henri Matisse.
She completed ‘Q.E.D.’ in 1903 but was suppressed by the author until it was published in 1950 as ‘Things as They’. The story is based on the lesbian triangular love that happened at John Hopkins.
In 1904, Stein began ‘Fernhurst’, a fictional account of a scandalous three-person romantic affair involving a dean, Carey Thomas, a faculty member, Mary Gwinn, and a Harvard graduate, Alfred Hodder.
By early 1906, Leo and Gertrude Stein's studio had many paintings by Henri Manguin, Pierre Bonnard, Pablo Picasso, Paul Cezanne, Pierre-Auguste Renoir, Honore Daumier, Henri Matisse, Henri de Toulouse-Lautrec and Gauguin.
Between 1908 and 1913, she wrote descriptive essays which were word portraits catalogued in Mellow. People like Picasso, Matisse and others who used to attend the Saturday Salon were subjects of the portraits.
In 1909, she published her first book, ‘Three Lives’. It was made up of three independent stories, ‘The Good Anna’, ‘Melanctha’, and ‘The Gentle Lena’, all set in Bridgepoint, a fictional town.
In 1914, Leo relocated to Italy, and the art collection was divided. He departed with 16 Renoirs and most of Matisse, leaving Picasso to his sister. She now turned her focus on Cubism.
In 1914, she published ‘Tender Buttons’ a small book separated into three sections—Food, Objects and Rooms. It is one of the great modern experiments of Cubanism in verse, a collection of confusing gibberish.
Continue Reading Below
‘Everybody's Autobiography’, published in 1937, is a continuation of her own memoirs and a sequel to ‘The Autobiography of Alice B. Toklas’. Both were written in a less experimental, more approachable style
In 1938, she wrote ‘Doctor Faustus Lights the Lights’ as a libretto for an opera. When it was premiered at Beaver College, she was hailed as the ‘Bard of Bedlam’. 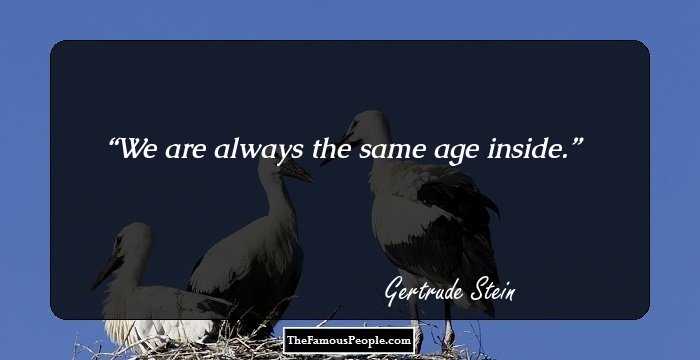 Major Works
Her novel, ‘The Making of Americans’, traces the genealogy, history, and psychological development of members of two fictional families. Though she had finished writing this book much earlier, it was published only in 1925.
‘The Autobiography of Alice B. Toklas’, published in 1933, has seven chapters that cover the first three decades of the last century. Its real subject is Stein herself and not her friend Alice.
Awards& Achievements
She was awarded the 2nd Lambda Literary Award in 1990, in the Editor's Choice category for her erotic poem, ‘Lifting Belly’, which was published the previous year with an introduction by Rebecca Marks. 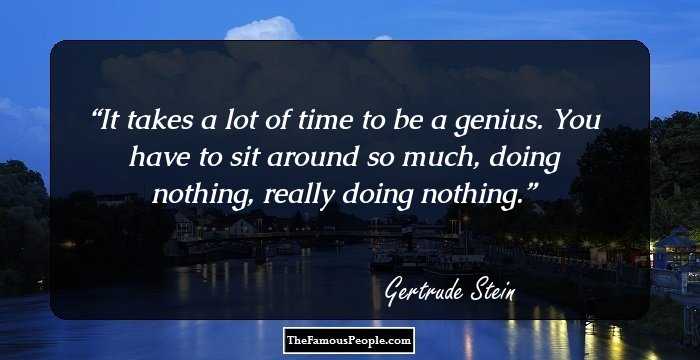 Quotes: You, Time
Personal Life & Legacy
She realized that she was a lesbian while studying medicine at Hopkins. She met her life partner Alice B. Toklas in 1907, on Toklas' first day in Paris, at her brother, Michael’s apartment.
Stein died from stomach cancer in Neuilly-sur-Seine and was interred in Paris in P�re Lachaise Cemetery. Carl Van Vechten her literary executor, helped to publish all her unpublished works after her death.
From Ayn Rand's working notes for her novel ‘The Fountainhead’, it is clear that the character Lois Cook in that book was intended as a caricature of Stein.
You May Like

Quotes By Gertrude Stein | Quote Of The Day | Top 100 Quotes

See the events in life of Gertrude Stein in Chronological Order