H. P. Lovecraft was an American horror fiction writer, credited with starting a trend in fantasy and science fiction (sci-fi) writing. Mostly an autodidact, he never completed school education; he often stayed home due to fragile health, reading books far advanced for his age. Writing his first story at the age of six, he took up writing as his profession at the age of 24. As he was too shy to promote his work, he got little remuneration for his talent and most of his works were published in pulp magazines. All his life, he lived in poverty, often forced to take up ghost-writing to meet his expenses. It was only after his death that two of his friends, August Derleth and Donald Wandrei, collected his stories and made arrangement for their publication. If not for August and Donald, the world would have lost great pieces of writings which are now treasured in the world of literature. Lovecraft’s writings have had a great impact on modern popular culture. They have also influenced and inspired many other writers like August Derleth, Robert E. Howard, Robert Bloch, Fritz Leiber, Clive Barker, Stephen King, Alan Moore, Neil Gaiman, and Mike Mignola. Cause of Death: Cancer Of Small Intestine 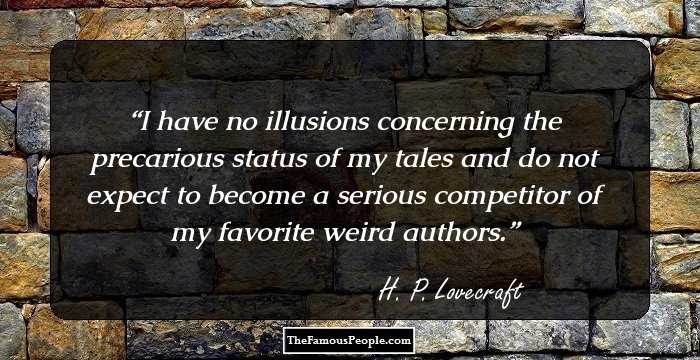 Quotes: I
Continue Reading Below
Career
In 1913, an incident led H. P. Lovecraft out of this seclusion, helping him to take up writing as his career. A writer named Fred Jackson wrote a series of insipid love stories for a pulp magazine called ‘Argosy.’ Reading them, he became so infuriated that he wrote a letter attacking Jackson.
Written in verse, the letter evoked angry response from Jackson’s fans, giving rise to a heated debate between Lovecraft and Jackson’s defenders. Lovecraft’s letters soon caught the attention of Edward F. Daas, President of the ‘United Amateur Press Association’ (UAPA).
In 1914, Lovecraft joined UAPA on the invitation of Daas, launching his own paper ‘The Conservative’ in 1915. He ran 13 issues of it, concurrently contributing large number of poems and essays for other journals like ‘The Providence Evening News’ and ‘The Asheville (N.C.) Gazette-News.’
After coming out of his seclusion, Lovecraft submitted ‘The Alchemist,’ a short story which he had written in 1908, to ‘United Amateur.’ It was published in the November 1916 issue of the journal. It was his first published short story.
Sometime now, he came in contact with W. Paul Cook, a leading figure in the tradition of amateur journalism. He not only widened Lovecraft’s knowledge of supernatural literature by supplying him with books, but also encouraged him to undertake systematic study in the subject and write more fictional works.
Encouraged by Cook, Lovecraft began to write fictions, producing ‘The Tomb’ and ‘Dagon’ in the summer of 1917. Thereafter, he produced a number of short stories. However, until 1922, poems and essays remained his preferred mode of literary expression.
He also corresponded regularly with friends through letters, eventually becoming the century’s most prolific letter-writer. Over the course of his life, he had written 100,000 letters, consisting of several million words. Many of these were written to fellow writers like Robert Bloch, Henry Kuttner, Robert E. Howard, and Samuel Loveman.
In February 1924, he was commissioned by J. C. Henneberger, founder and owner of ‘Weird Tales,’ to ghost-write a story for magician Harry Houdini, and was offered $100 for it. He had been contributing to the magazine since 1923 and agreed to ghost write because of the lucrative offer.
In March 1924, H.P. Lovecraft got married and relocated to Brooklyn. After detailed research on pharaohs, he wrote ‘Imprisoned with the Pharaohs.’ It was published in the May-June-July 1924 edition of ‘Weird Tales’ under Houdini’s name. Later, the two collaborated on several other projects.
Continue Reading Below
1924 also saw the formation of ‘Kalem Club,’ a literary circle, around Lovecraft. Urged by its members, he now began to submit a number of otherworldly stories to ‘Weird Tales.’
Although initially he enjoyed life in New York, the good times did not last long. Very soon, he started facing financial problem and discord at home. He even tried to land jobs but failed. Eventually, on April 17, 1926, he returned to Providence without his wife.
H.P. Lovecraft spent the last few years of his life in Providence, producing a large body of work. ‘The Call of Cthulhu,’ which was completed in 1926, is one of his most memorable works. He also traveled to many places, looking for perfect locales for his stories.
In 1927, he wrote a short novel called ‘The Case of Charles Dexter Ward.’ However, he himself found it to be "cumbrous, creaking bit of self-conscious antiquarianism" and therefore left it unpublished. When it was published posthumously, critics found it to be one of his finest works.
Other notable stories which he wrote during this period were ‘Dunwich Horror’ (1928), ‘At the Mountains of Madness’ (1931), ‘The Shadow over Innsmouth’ (1931), and ‘The Shadow out of Time’ (1934-1935). Concurrently, he also continued corresponding with his friends, producing a vast number of letters.
In spite of producing a number of masterpieces, H.P. Lovecraft never earned much and spent his last few years in poverty. It was mainly because he was too shy to promote his works; consequently, his works were mostly published in pulp magazines, which did not pay much.
The last two or three years of his life were especially hard. During this period, he lived with his aunt in a dingy house, surviving on his income from ghost-writing and a small inheritance which was fast drying up. By then, he had lost interest in selling his works.
Along with his financial woes, he also had to put up with the pain caused by intestinal cancer. In spite of such hardships, he continued to write letters, often going without food to pay for the charges of mailing his letters. 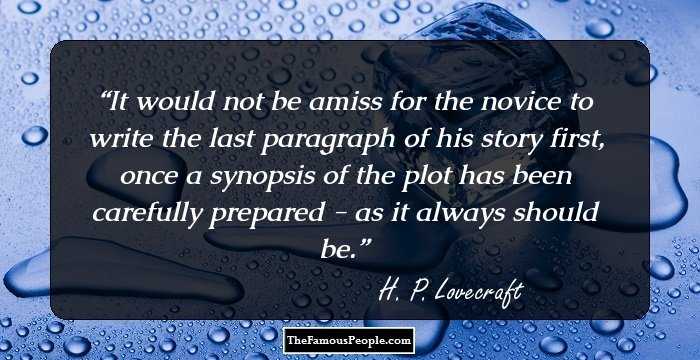 Continue Reading Below
Major Works
H.P. Lovecraft is most celebrated for his 1926 short story ‘The Call of Cthulhu.’ Although he himself considered it "rather middling - not as bad as the worst," scholars like Peter Canon appreciated his work, stating “for its dense and subtle narrative in which the horror gradually builds to cosmic proportions.”
‘The Shadow over Innsmouth’ is one of his most important creations. Written in November-December 1931 and published in April 1936, this novel is the only Lovecraft creation to be published in book form during his lifetime.
Personal Life & Legacy
On March 3, 1924, H.P. Lovecraft married Sonia Haft Green, a successful milliner, pulp fiction writer, and amateur publisher. She was seven years his senior and had an apartment in Brooklyn. After the wedding, they settled down in the apartment, but trouble erupted soon after.
Green lost her shop and also became ill. Lovecraft tried finding a job, but no one was willing to hire a 34-year-old man without any job experience. Ultimately, Green left New York for a job, while he hired a house in Brooklyn Heights, struggling to make ends meet.
On April 17, 1926, H.P. Lovecraft returned to Providence and started living with his aunt. Green also wanted to settle down in Providence. However, Lovecraft’s aunts discouraged Green from doing so, and hence they decided to go for mutual divorce which never materialized.
In early 1937, Lovecraft was diagnosed with cancer. On March 10, he was admitted to ‘Jane Brown Memorial Hospital’ in Providence. He died at the hospital on March 15, 1937.
On March 18, 1937, his body was buried in Phillips’ family plot at ‘Swan Point Cemetery.’
In 1977, his fans erected a headstone on his grave, inscribing his name, dates of his birth and death, and a line from one of his personal letters, which reads "I AM PROVIDENCE."
In July 2013, the Providence City Council put a marker at the intersection of Angell and Prospect streets, designating it as ‘H. P. Lovecraft Memorial Square.’ ‘The Providence Athenaeum’ library houses his bronze bust. 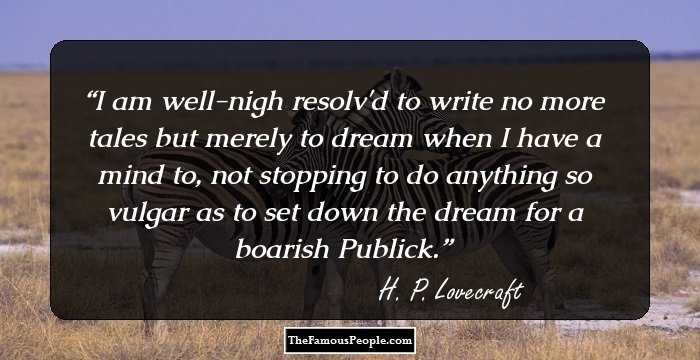 See the events in life of H. P. Lovecraft in Chronological Order