(Best Known for His Novel 'The Great Gatsby')

F. Scott Fitzgerald was an American author. Often featured among the greatest authors of the 20th century, he is still regarded as one of the finest authors of the USA. A product of the ‘Jazz Age,’ a term which he coined, Fitzgerald excelled in writing short stories and novels. Writers from all over the world consider him to be a writer of exquisite quality. No wonder he is still revered by fans of literature and casual readers alike. “Fitzgerald was a better just plain writer than all of us put together. Just words writing,” wrote John O’ Hara to another famous American writer John Steinbeck. Similar sentiments have been expressed by several authors, critics, readers, and scholars. Although F. Scott Fitzgerald is primarily known as a great novelist, it should not be forgotten that he started his writing career as a short story writer and wrote plenty of critically acclaimed stories. In addition to that, he has also written poems, which makes him a versatile literary genius. Later in his career, he turned to Hollywood, writing and revising screenplays. He died in 1940 after a long struggle with alcoholism. His works received popular and critical acclaim only after his death. F. Scott Fitzgerald was born Francis Scott Key Fitzgerald on September 24, 1896, in the city of Saint Paul in Minnesota, USA, to Edward Fitzgerald and Molly Fitzgerald. He was born into a family of aristocrats. His father was an executive at ‘Procter & Gamble’ at the time of his birth.

Till the age of 12, Fitzgerald lived in Buffalo, New York where he studied at the ‘Holy Angels Convent’ before enrolling at the ‘Nardin Academy.’ Even at such a young age, Fitzgerald showed a keen interest in literature and had an eye for details.

In the year 1908, the family went back to their native state of Minnesota after Fitzgerald’s father Edward was sacked from ‘Procter & Gamble.’ He was then enrolled at the ‘St. Paul Academy’ in his home town. He wrote an acclaimed detective story during his first year at ‘St. Paul Academy.’

Fitzgerald was sent to the famous ‘Newman School,’ located in Hackensack, New Jersey, in the year 1911. It was during his time at ‘Newman School’ that he was encouraged by his teachers to take up writing as a profession due to his skills as a writer.

Scott enrolled at the prestigious ‘Princeton University.’ He left the university in 1917 as he could not pursue his academics along with his literary pursuits. He enrolled in the army after his manuscript for the novel ‘The Romantic Egotist’ was rejected by a publisher. 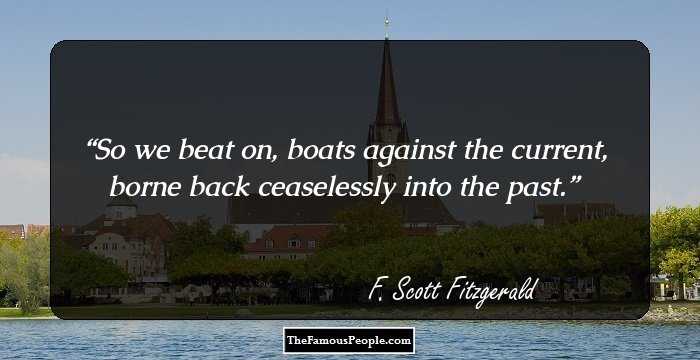 Quotes: Past
Continue Reading Below
Career

In the year 1918, Fitzgerald returned to New York City after the conclusion of the ‘First World War’ and took up a job in an advertising agency called ‘Barron Collier.’ He took up the job in order to earn enough money to marry Zelda Sayre, a girl he had fallen in love with.

He started working on his first novel ‘This Side of Paradise’ and it was in the year 1919 that the manuscript was accepted by Scribner’s. The book was published the next year and quickly became a bestseller. The success of the book convinced his long-time love interest Zelda Sayre that he was capable of making money with his writing skills.

The success of his first novel landed him writing opportunities with popular magazines like ‘The Saturday Evening Post’ and ‘Esquire.’ These magazines were known to pay their writers well. He also wrote short stories for them in order to supplement his income.

In the year 1922, Scott published his second novel titled ‘The Beautiful and Damned,’ which dealt with the life of a couple from the cream of society.

Fitzgerald and his wife Zelda moved to Paris in 1924 where they developed close acquaintance with a group of locals consisting of American expatriates. Fitzgerald struck up a friendship with another famous writer Ernest Hemingway while he was in France. Fitzgerald’s fourth novel ‘Tender Is the Night’ was based on his experiences in Paris.

In the year 1925, while he was still in France, Fitzgerald finished his best work ‘The Great Gatsby,’ which is regarded as one of the greatest ever novels written in the English language.

Fitzgerald decided to try his hand at writing for movies. In 1937, he went to Hollywood looking for work. He wrote plenty of short stories for different publications, worked on movie scripts, and also worked for MGM for a while. 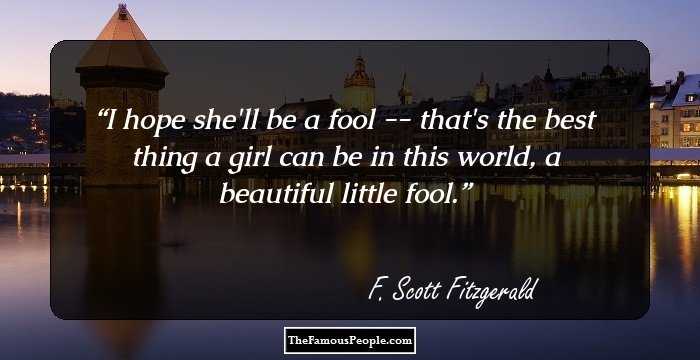 There is absolutely no doubt that F. Scott Fitzgerald’s most important work is his novel ‘The Great Gatsby.’ It deals with the concept of the mythical ‘American Dream.’ It has sold millions of copies worldwide since its publication in 1925.

In spite of being one of the most influential writers of his generation, Scott F. Fitzgerald did not win many awards during his lifetime. In 2009, he was inducted into the ‘New Jersey Hall of Fame’ by the US state of New Jersey. 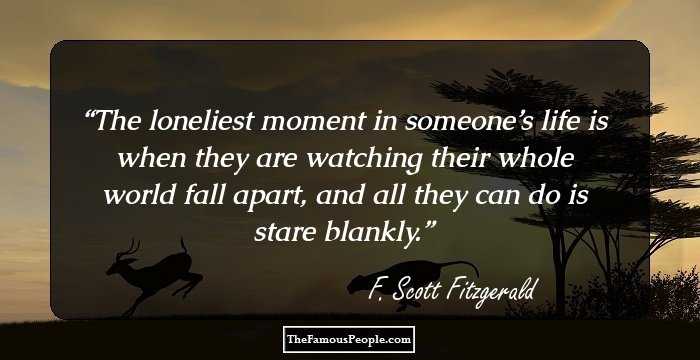 Fitzgerald got married to Zelda Sayre, whose father was an Alabama Supreme Court Judge, on October 26, 1921. The couple had a daughter named Frances Scott Fitzgerald, who went on to become a popular journalist and writer.

The popular novelist was an alcoholic and his wife’s mental breakdown pushed him further towards alcoholism. He left her in 1937 when he moved to Hollywood. In Hollywood, he started a romantic relationship with journalist Sheilah Graham.

On December 21, 1940, at the age of 44, F. Scott Fitzgerald died of heart attack at his home in Hollywood. He was buried at ‘St Mary’s Cemetery’ in Rockville, Maryland.

See the events in life of F. Scott Fitzgerald in Chronological Order