Geronimo was one of most well-known Apache leaders and a medicine man who rose against the American and Mexican imperial forces during the long war in the second half of the 19th century. Born in Turkey Creek, New Mexico, he belonged to the Bedonkohe band of the Apache tribes. He joined the rebellion against the American and Mexican military forces that were determined to oust the natives from their lands. Although he was a well-known warrior among the Apache tribes, he was never their chief. He fought most fights as a subordinate leader, with about 30 to 50 men under his command. Despite that, on many occasions, he led hundreds of men and women into war. His tactical skills and bravery played a major role in the embarrassment faced by the strong military forces of the US and Mexico, dominated by Anglo–Americans. Between 1876 and 1886, Geronimo surrendered three times and was sent to the Apache reservations in Arizona. However, he resented it and escaped thrice. He had become a celebrity by then and was treated with respect by the American generals when he was finally imprisoned. In 1909, he died at the ‘Fort Sill Hospital’ in Oklahoma, US. Image Credit
https://en.wikipedia.org/wiki/Geronimo#/media/File:Geronimo,_as_US_prisoner.jpg
(W. H. MartinWas included in History of the American West, 1860-1920: Photographs from the Collection of the Denver Public Library [Public domain])
Previous   Next

Michael Flynn
DID WE MISS SOMEONE?
CLICK HERE AND TELL US
WE'LL MAKE SURE
THEY'RE HERE A.S.A.P
Quick Facts

American Celebrities
Male Leaders
Gemini Leaders
American Leaders
American Military Leaders
Childhood & Early Life
Geronimo was born on June 16, 1829, near Turkey Creek, presently part of New Mexico. He belonged to the Bedonkohe band of the Apache tribes. Not much is known about his father. His grandfather, Mahko, was once the chief of his tribe. He grew up in a huge family, with three brothers and four sisters.
He trained to be an efficient hunter, and his parents left no stone unturned in abiding by the Apache traditions of raising a child. Before he reached his teenage years, his father died. He was then sent to live with the Tchihende tribe, according to Apache customs. The Tchihende were known as one of the deadliest Apache groups.
At the age of 17, Geronimo got married to a young girl named Alope. She was from the Nedni-Chiricahua band of the Apache tribes. She was the first of his nine wives. The couple had three children. However, tragedy struck the family soon. Geronimo had to go through the pain of losing his wife, his mother, and children to Mexican attacks. This sowed the seeds of hatred in his heart.
In the mid-19th century, the Apache lifestyle, which involved raiding and looting, was not setting well with the Mexican government. As a result, several Apache tribes were attacked by the Mexican military. In 1858, while Geronimo was out on a trading mission, the Mexicans attacked the Bedonkohe camp and killed several Apache families. Among the dead were Geronimo’s wife, children, and mother. This enraged Geronimo, and his fight began. 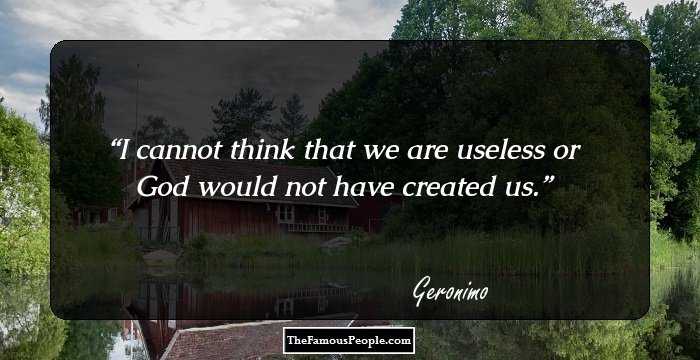 Quotes: Think, God, I
Continue Reading Below
Rise as the Leader
Devastated by the murder of his entire family, Geronimo headed toward the wilderness to grieve in silence. Before that, he burned all the belongings of his family, according to Apache traditions. He was not a very well-known man amongst the Apache tribes back then. However, he returned with the claim that a divine voice had ordered him to seek revenge and guaranteed that he would remain unscathed by enemy bullets.
Geronimo was now considered to be a messianic figure among his tribes, and he easily managed to gather two hundred strong men to extract his revenge. The Mexican soldiers who had committed the atrocity belonged to the Sonora encampment. Geronimo’s attack wiped out the entire military strength that was responsible for his tragedies.
Although the American forces, too, were involved in the on-and-off war with the Apache tribes, Geronimo’s hatred of the Mexicans was far greater, and this led him to attack the Mexican troops several times. He later wrote in his biography that he had killed many Mexicans and that he did not think they were worthy of living. He carried his hatred of the Mexican forces till the very end of his life.
The Apache tribes and the Mexicans continued to fight for many years following that. In 1873, the Mexican forces once again launched an attack on the Apache tribes, who were tired of frequent wars by then. The fights continued for months in the mountains at Chihuahua, Mexico. Following a long battle, both the parties decided to enter into a peace treaty.
The Mexicans threw a party and served alcohol to the Apache men, and when they got intoxicated, they were slaughtered. Following this betrayal, the Apache forces were once again forced to take shelter in the mountains. Geronimo continued to fight against Mexico in the Sonora and the Chihuahua regions. Tired of fighting the Mexican and American troops, the Apache warriors decided to give up and were shipped to the ‘San Carlos Apache Indian Reservation.’
Geronimo was not the one to give up the struggle, but after his army strength weakened in 1877, he was finally captured. He was then sent to San Carlos as a prisoner. 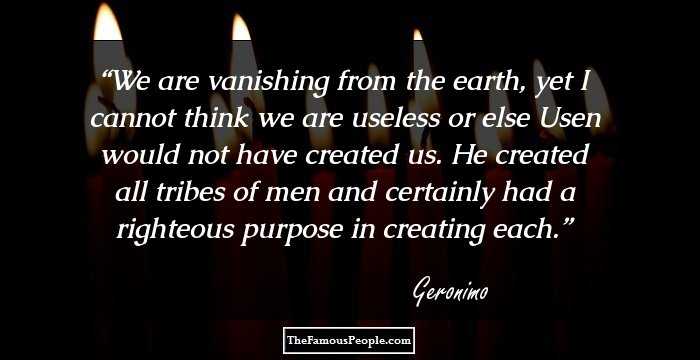 Quotes: Think, I
Later Years of Struggle
For a few years following that, Geronimo tried to live the life of a slave as directed by the Mexicans. He tried his hand at farming, but his strong hatred of Mexicans refused to die down. Moreover, he did not like living as a slave. He fled the reservation in 1878 and went to the mountains. There, he built up his forces yet again. He attacked the Mexican troops several times in the next few months.
By then, he had become a respected leader among the Americans, too. He was apprehended in 1882, but he staged yet another escape. He also asked several of his allies from the reservations to join his forces in the war. It is said that when his words failed, he even recruited his troops at gunpoint.
Continue Reading Below
He was captured yet again and was brought to Arizona. He staged yet another escape in 1884. He was caught soon, but he was not the one to rest there. Within a year, he escaped the reservation once again.
The Americans and the Mexicans joined hands to search for Geronimo and his 40 followers. By then, all the other Indian commanders had surrendered to either the American or the Mexican forces. After running away for five months from about eight thousand military personnel comprising of American and Mexican forces, Geronimo’s men finally decided to surrender.
On September 4, 1886, Geronimo finally stopped running. By then, he was in his 60s and had become a legend who was featured on the front pages of American newspapers.
Life Post War
As the conflict ended, Geronimo and the rest of the Chiricahuas were sent to the army camps in Florida to do manual labor. He was later transferred to Oklahoma and Alabama to do manual work. The fact that he was old did not help much. He requested to be sent to the reservation camps. However, his appeal was denied, as he was considered a prisoner of war for life.
Later, he resorted to farming. Owing to his celebrity status, many American tourists visited him. He made some extra money by giving autographs and selling other personal items to tourists. 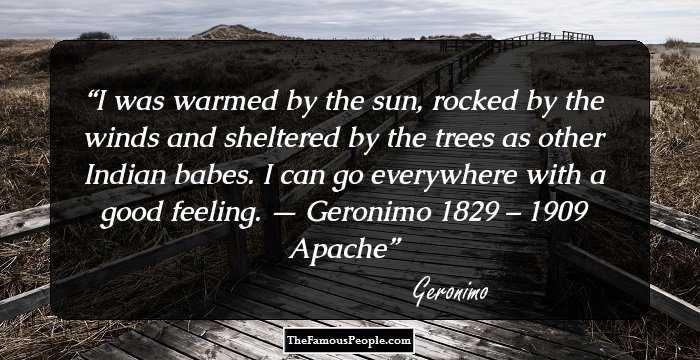 Quotes: I
Personal Life & Death
After the death of his first wife, Geronimo married eight more times. His eight wives were Ta-ayz-slath, Chee-hash-kish, Nana-tha-thtith, Zi-yeh, She-gha, Shtsha-she, Ih-tedda, and Azul. Geronimo had seven children from eight wives. Three children from his first wife were murdered by the Mexican troops.
In February 1909, Geronimo was thrown from his horse while riding. Too old to save himself, Geronimo lay on the ground an entire night and caught pneumonia. He died on February 17, 1909, at Fort Sill, Oklahoma. He was buried at a cemetery near his house.
Several films, TV series, books, and plays have used Geronimo as one of their central characters. His legend lives on, and he remains a key part of the modern history of America.

See the events in life of Geronimo in Chronological Order