(Playwright and Poet Known for His Works 'The Robbers', 'Don Carlos' and 'Mary Stuart')

Born In: Marbach am Neckar, Germany

Voted by a Franco-German TV network as ‘the second most important playwright in Europe after William Shakespeare’, Friedrich Schiller is widely revered to as one of the most important classical playwrights of Germany. He managed to conceive new forms of expression in drama like bourgeois tragedy and melodrama. During his lifetime, Schiller formed an intimate and close friendship with the famous writer Johann Wolfgang von Goethe. Schiller encouraged Goethe to finish many of his incomplete works and their discussions led to the creation of what came to be known as ‘Weimar Classicism'. They also worked on the collection of satirical poems titled, ‘Xenien’. During his lifetime, he authored many papers on philosophy, ethics and aesthetics. Many of his stage plays have been adapted by composers of the 20th century and later. During his earlier days he was trained to be a priest but later obtained a degree in medicine. He initially worked as a regimental physician but later quit the same to watch the opening of one of his plays. Born In: Marbach am Neckar, Germany

Ernst Jünger
DID WE MISS SOMEONE?
CLICK HERE AND TELL US
WE'LL MAKE SURE
THEY'RE HERE A.S.A.P
Quick Facts

German People
Philosophers
Playwrights
German Men
Male Poets
Childhood & Early Life
He was born as Johann Christoph Friedrich von Schiller in Marbach am Neckar, W�rttemberg, Holy Roman Empire. His parents were, Johann Kaspar Schiller, a military doctor and Elisabeth Dorothea Kodwei�.
In 1763, his father was appointed as a recruiting officer at Schwabisch Gmund, Germany. The family hence relocated to Germany and settled down in the small town of Lorch.
In Lorch, he attended primary school but was rather unhappy with the quality of education and often missed classes. Since his parents wanted him to become a pastor; he was instructed in Latin and Greek by the village pastor.
In 1766, the family resettled in Ludwigsburg, where his father took up an assignment. Here he came under the notice of Karl Eugen, Duke of Wurttemberg. He later graduated with a degree in medicine from the Karlsschule Stuttgart.
His first play, ‘The Robbers’ was written while he was still in school. It was published in the year 1781 and the following year, it opened in Germany. The play was primarily about a conflict between two brothers. 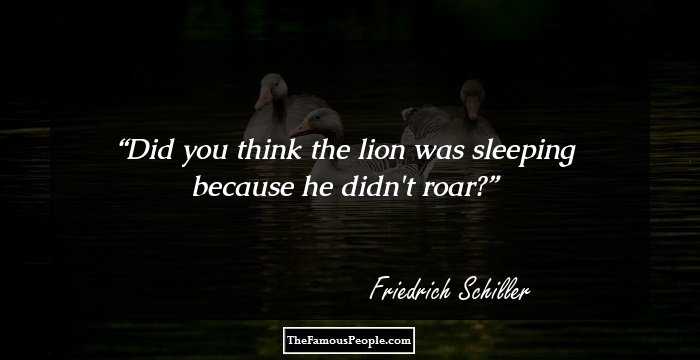 Quotes: You, Think
Continue Reading Below
Career
In 1780, he was appointed as a regimental doctor in Stuttgart, Baden-W�rttemberg, Germany. He was not very happy with the job and hence quit the same without permission to watch the opening of his play, ‘The Robbers’.
Since he left his regiment without any prior permission, he was later arrested and was penalized with a sentence of 14 days. He was also prohibited from publishing any of his works in future.
In 1782, he escaped to Weimar, through Frankfurt, Mannheim, Leipzig, and Dresden. The following year, his full length drama, ‘Fiesco' premiered at Bonn, Germany.
In 1784, his five-act play titled ‘Intrigue and Love', premiered at the Schauspiel Frankfurt. In later years, the play was translated in French and English.
In 1785, he came out with the poem titled, 'Ode to Joy'. The following year, he came out with his work of prose titled, ‘Der Verbrecher aus verlorener Ehre', written in the form of a crime report.
In 1787, his five act tragic play, ‘Don Carlos' opened in Hamburg. The play revolved around the clash between Don Carlos and his father, King Philip II of Spain.
In 1789, he became a professor of History and Philosophy in Jena. Here he began writing historical works, one of which includes ‘The Revolt of the Netherlands'.
In 1794, his work of prose titled, ‘On the Aesthetic Education of Man in a series of Letters' was published. This work was written taking the French Revolution as a frame of reference.
In 1797, he wrote the ballad, ‘Polycrates' Ring', which was published the next year. That year, he also authored the ballads, 'The Cranes of Ibycus' and 'Der Taucher'.
Continue Reading Below
In 1799, he completed his drama trilogy titled, ‘Wallenstein'. The trilogy consisted of the plays, ‘Wallenstein's Camp', 'The Piccolomini' and 'Wallenstein's Death'.
In 1800, he came out with the plays, ‘Mary Stuart' and 'The Maid of Orleans'. The following year he came out with the work of translation, ‘Carlo Gozzi, Turandot' and the play,‘Turandot, Prinzessin von China’.
In 1803, his tragic play titled ‘The Bride of Messina' premiered at Weimar, Germany. The following year, he wrote the work of drama titled, ‘William Tell', based on the Swiss marksmanof the same name. 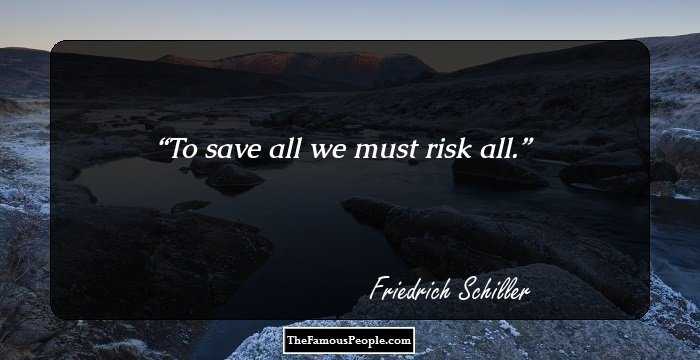 Major Works
His play, 'The Robbers' is regarded as one of the first European melodramas. The work provides a window for the societal viciousness and scrutinizes the inequalities that result out of class, religion and economic status differences in people.
Awards & Achievements
In 1802, he was ennobled by the Duke of Weimar, who granted him the title of ‘von’, which was added to his name, signifying nobility. 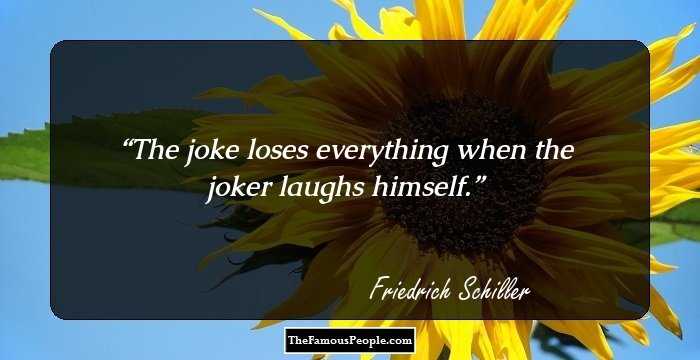 Personal Life & Legacy
In 1790, he married Charlotte von Lengefeld. The couple had four children.
He died at the age of 45 due to tuberculosis.
In 1839, a statue of him was built in the city of Stuttgart. It was later renamed Schillerplatz.
It is speculated that this renowned German poet, historian and philosopher was a Freemason.
Trivia
In 2008, after DNA tests, scientists found that the skull found in this German poet and writer’s coffin was not his and his tomb now lies vacant.
Recommended Lists:
Writers #291
Intellectuals & Academics #292

Quotes By Friedrich Schiller | Quote Of The Day | Top 100 Quotes

See the events in life of Friedrich Schiller in Chronological Order