(Theatre Practitioner, Playwright, and Poet Known for His Plays: ‘The Threepenny Opera’ and ‘Life of Galileo’)

Bertolt Brecht, born as Eugen Berthold Friedrich Brecht, was a German poet, playwright and theatre practitioner. He was a visionary who departed from the accepted conventional norms of illusion in theatrical production and tried new approaches to develop a better understanding of drama. He insisted that the audience view the stage and actors from a realistic and rational perspective and not as the conventional “make-believe” world. He was just 16 when the World War I started – he became increasingly disillusioned with the society and started moving towards Marxism and Dadaism. Even though he had studied medicine in university, he developed a profound interest in literature. He wrote his first play ‘Baal’ in 1918 which was theatrically produced in 1923. His meeting with the novelist and playwright Lion Feuchtwanger in 1919 proved to be a turning point in his career. He worked with him on an adaptation of Christopher Marlowe’s play Edward II, which greatly inspired his theatrical and dramaturgical development. He was a part of Erwin Piscator’s first company which was dedicated to the development of its "epic, political, confrontational, documentary theatre." He also collaborated with Kurt Weill and was influenced by Chinese theatre. He, along with his wife, founded the theatre company ‘Berliner Ensemble’ during the post war years. Max Ernst
DID WE MISS SOMEONE?
CLICK HERE AND TELL US
WE'LL MAKE SURE
THEY'RE HERE A.S.A.P
Quick Facts

German Celebrities
Playwrights
German Men
Male Poets
German Poets
Childhood & Early Life
Bertolt Brecht was born in Germany to a protestant mother and a catholic father. His father worked in a paper mill and his mother was a religious woman who ensured that he learned the bible.
He met Caspar Neher in school who later designed many of the sets for Brecht’s dramas and helped design a distinctive visual iconography that would uniquely identify the epic theatre.
The World War I broke out when he was just 16. He studied medicine at Munich University and served as a medical orderly in a military hospital in 1918. 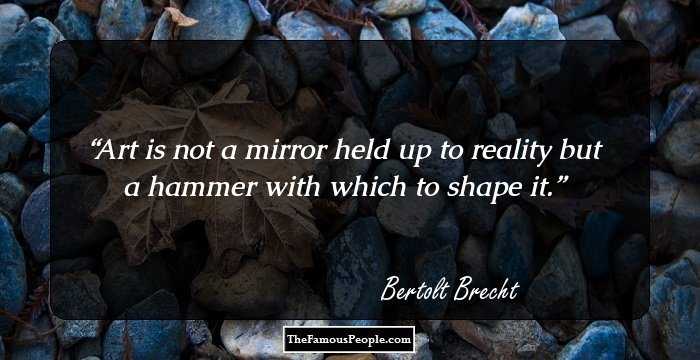 Quotes: Art
Continue Reading Below
Career
He wrote his first play ‘Baal’ in 1918. It was the story of an aimless youth involved in several affairs. The play was theatrically produced in 1923.
‘Drums in the Night’ was the second play he wrote, but it was his first play to receive a theatrical production. It was written between 1918 and 1920, and produced in 1922.
In 1923, he wrote the script for a comic, slapstick film ‘Mysteries of a Barbershop.’ It was not successful during its time, but later on came to be regarded as one of the most important films in German film history.
His play ‘Man Equals Man’, produced in 1926, explored the themes of war, and human identity. The musical, ‘The Threepenny Opera’ was premiered under collaboration between Brecht, Kurt weill and Caspar Neher in 1928.
In 1930, his play ‘Rise and Fall of the City of Mahagonny’, a political satire opera, composed by Kurt Weill, was performed. In the year 1932, Brecht wrote the script for ‘Kuhle Wampe’, a German film dealing with issues of unemployment and left wing politics.
He wrote the play ‘Life of Galileo’ between 1937 and 1939, but it could not be theatrically produced till the middle of 1940’s. It was a historical drama concerning the later years of the Italian philosopher and scientist, Galileo Galilei.
In 1943, he wrote the script for his only Hollywood film, ‘Hangmen Also Die!’ The story was loosely based on the killing of Reinhard Heydrich, also known as ‘The Hangman of Prague.’
The play ‘The Caucasian Chalk Circle’ was written by him in 1944 and premiered in 1948. The story deals with a peasant girl who rescues a baby and brings it up as her own and proves to be a better mother than the child’s natural mother.
At the time of his death in 1956, he left behind several unfinished plays and also plays that had been completed but had not yet been produced.
Continue Reading Below 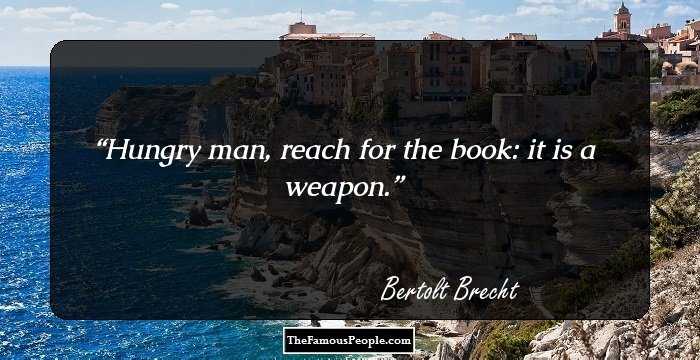 Major Works
‘The Threepenny Opera’, a musical that premiered in 1928 had been translated into 18 languages and performed more than 10,000 times across European by 1933.
The historical drama, ‘Life of Galileo’ dealt with the latter period of the life of the great Italian philosopher Galileo Galilei who was persecuted by the Roman Catholic Church.
The play ‘Mother Courage and Her Children’ which Brecht co-wrote with Margarete Steffin in 1939 is considered by some to be the greatest play of the 20th century. The play was also filmed several years after his death.
‘The Caucasian Chalk Circle’ is a play he wrote in 1944 while he was in the U.S. It tells the story of a child who is rescued and brought up by a peasant girl. This play is considered as one of his most important works.
Awards & Achievements
He was awarded the prestigious Kleist Prize in 1922 for his first three plays ‘Baal’, ‘Drums in the Night’, and ‘In the Jungle.’
He was posthumously awarded the Drama Desk Award for Outstanding Lyrics in 1970 for ‘Rise and Fall of the City of Mahagonny.’ 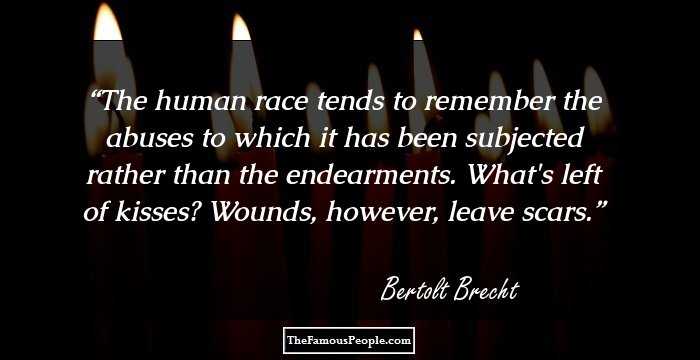 Personal Life & Legacy
As a young man he was in a relationship with Paula Banholzer and had a son with her. He married actress and singer Marianne Zoff in 1922 and divorced her in 1927. They had one daughter together.
In 1930, he married Helene Weigel, a German actress. They remained married till his death. They had two children.
Brecht died of a heart attack in 1956 at the age of 58.
Trivia
He was a committed Marxist throughout his life.
He coined the German term ‘Verfremdungseffekt’ which means “estrangement effect.”
The character Kaspar Prockl in Lion Feuchtwanger’s 1930 novel ‘Success’ is based on him.

Quotes By Bertolt Brecht | Quote Of The Day | Top 100 Quotes

See the events in life of Bertolt Brecht in Chronological Order