Epicurus was an ancient Greek philosopher of the Hellenistic period. He founded the Epicurean school of philosophy. The son of a school teacher, he began his study of philosophy as a teenager, according to his own accounts. He was influenced by the works of philosophers Democritus, Aristippus, and Pyrrho and rejected the Platonism of his day. According to one story, he was very curious as a student and asked his schoolmaster to explain the concept of chaos in ancient philosophical poet Hesiod’s works. His schoolmaster was unable to provide the young man a satisfactory answer, and this propelled Epicurus to come up with his own philosophical theories. He proceeded to establish his own school, The Garden, in Athens, where he advocated for a simple lifestyle dedicated to philosophical pursuits. Adopting a policy that was revolutionary for his time, he welcomed slaves and women to join the school. He was a prolific writer who is believed to have composed over 300 treatises on a myriad range of subjects; however, most of his works have been lost and only a few letters written by him survived intact. Epicureanism was popular from the beginning and peaked during the late years of the Roman Republic. Image Credit
https://commons.wikimedia.org/wiki/File:Epikur_Statue.jpg
(Nobody60, CC BY 3.0 Chrysippus
Philosophers #45
Intellectuals & Academics #64
DID WE MISS SOMEONE?
CLICK HERE AND TELL US
WE'LL MAKE SURE
THEY'RE HERE A.S.A.P
Quick Facts

Cause of Death: Stone Blockage Of Urinary Tract

Epicurus was born in February 341 BC, in Samos, Greece. His father, Neocles, and mother, Chaerestrate, were both Athenian-born. His father was a school teacher.

He was born during the final years of the Greek Classical Period, seven years after Plato’s death. Alexander the Great crossed the Hellespont into Persia when Epicurus was seven years old, and he was about 19 when Aristotle died.

He is believed to have received a typical ancient Greek education. He studied under a Samian Platonist named Pamphilus, for about four years. He also studied philosophy under Nausiphanes, a follower of Democritus, and was deeply influenced by the pre-Socratic philosopher’s works. 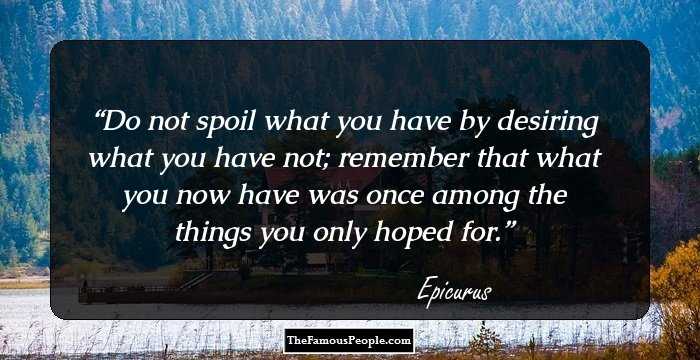 Epicurus had extensive training in rhetoric as well and served in the military for a while, as was required of every youth in his era. The training was compulsory for Athenian citizenship.

He was heavily influenced by the works of earlier philosophers but he couldn’t find the answers he sought in others’ teachings. During his era, the dominant philosophy in higher education was Platonism. However, Epicurus rejected this school of thought.

He began teaching in Mytilene in around 311 BC. His teachings came to be considered controversial and he was forced to leave the city. He then proceeded to found a school in Lampsacus. In around 306 BC, he returned to Athens, where he remained until his death.

He founded a school called The Garden, named after the garden that served as a meeting place for the teachers and students. More than just a school, The Garden was a community of like-minded people who aspired for a certain way of life.

The philosopher Hermarchus, Leonteus and his wife Themista, the financier Idomeneus, the satirist Colotes, Metrodorus of Lampsacus, and the mathematician Polyaenus of Lampsacus were prominent members of this school.

Among other things, The Garden was the first of the ancient Greek philosophical schools that readily admitted women. Slaves were also welcome to join the school.

Epicurus established a tradition of celebrating his birthday every year with common meals. His followers continued the custom even after his death.

An extremely prolific writer, he wrote around 300 treatises on a range of subjects. However, most of his works have been lost. Some fragments of his thirty-seven volume treatise On Nature have been recovered, but scholars haven’t had any success deciphering them so far. 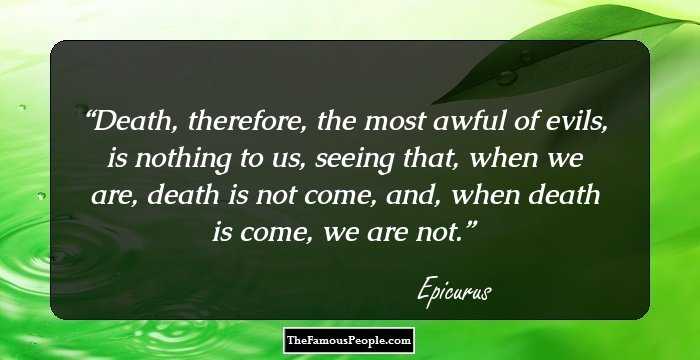 Epicureanism is a system of philosophy based upon the teachings of Epicurus. It was founded around 307 BC. Originating as a challenge to Platonism, Epicureanism flourished in the Late Hellenistic era.

The philosophy was very popular and many Epicurean communities were established in Antiochia, Rhodes, Alexandria, and Herculaneum. According to Epicureanism, seeking pleasure was the chief good in life.

Epicurus believed that one’s ideal goal should be deriving the greatest amount of modest, sustainable pleasure possible during one's lifetime. Epicureans advocated two primary forms of pleasure: pleasures of the body and pleasures of the mind.

While Epicureanism does not deny the existence of the gods, it denies their involvement in the world. Epicureans believed that the gods do not interfere with human lives.

Concerning physics, Epicureans held the view that the entire universe consisted of two things: matter and void. They believed that matter is made up of atoms with unchanging qualities of shape, size, and weight.

Epicureanism continues to generate considerable interest in the modern era. A number of monographs, articles, abstracts, and academic papers have been published on the subject in the 20th and 21st centuries. Today, its popularity is relatively comparable to the appeal of other ancient Greek philosophical subjects such as Stoicism and Platonism.

Epicurus remained a lifelong bachelor and had no known children.

Some sources state that he was most likely a vegetarian, like many other ancient Greek philosophers.

He suffered from a painful stone blockage in his urinary tract towards the end of his life. Despite his immense physical suffering, he remained in good spirits until the very end and is believed to have been actively involved in his school until his last days. He died in 270 BC, at the age of around 72. 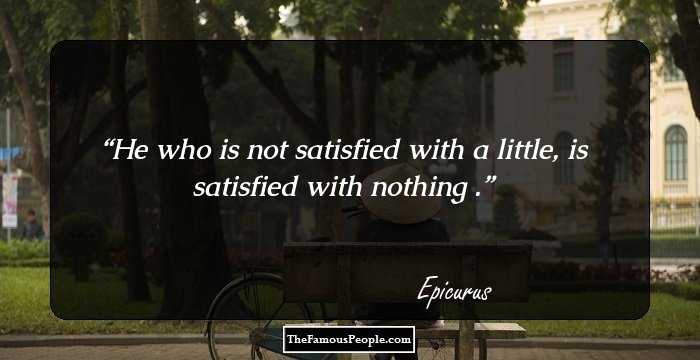 Quotes By Epicurus | Quote Of The Day | Top 100 Quotes

See the events in life of Epicurus in Chronological Order