Epictetus was a Greek Stoic philosopher, remembered for teaching philosophy not merely as a theoretical discipline, but as a way of life. According him, one should dispassionately accept whatever happens because external occurring is beyond our control, but our thoughts and actions are. Possibly born into slavery, he spent a significant part of his early years working as a slave under Nero’s secretary, Epaphroditus, studying with his permission with Stoic philosopher Gaius Musonius Rufus. Later, on being set free, he started teaching in Rome, eventually moving to Nicopolis after being banished from the city by Emperor Domitian. Here, he started a school, teaching Stoic Philosophy, which was more practical than theoretical, urging his students to focus attention on their opinions, anxieties, passions and desires. According to his most celebrated student, Arrian of Nicomedia, he was a powerful speaker, who could greatly influence his audience. Many important personalities of the day came to hear him speak. He died in Nicopolis around the age of 80. Plato
Philosophers #116
Intellectuals & Academics #230
DID WE MISS SOMEONE?
CLICK HERE AND TELL US
WE'LL MAKE SURE
THEY'RE HERE A.S.A.P
Quick Facts

Greek People
Greek Men
Male Philosophers
Greek Philosophers
Greek Intellectuals & Academics
Childhood & Early Life
According to available resources, Epictetus was born in Circa 55 AD, in Hierapolis, an ancient Greek city located in the Kingdom of Phrygia in the south western Anatolia. The area now falls under the Republic of Turkey.
Nothing is known about his family background or his early years. According to some historians, he was born as a slave, while it could also be true that he was later taken as one. Even if was taken as a slave, it is not known when.
It is also possible that his original name was not Epictetus, because in Greek the word “epíktetos” means "gained" or "acquired". Therefore, it can be assumed that the name was given to him when he was taken as a slave. Indeed, slaves were traditionally given new names by their owners.
He spent a significant portion of his early years in Rome, working as a slave under Tiberios Klaudios Epaphroditus, a freedman, who worked as a secretary to Emperor Nero. Although it is not known when, it must be prior to 68 AD, in which year Epaphroditus fled the capital with Emperor Nero.
Celsus, one of his younger contemporaries, has mentioned an interesting story about his life under Epaphroditus. One day his master deliberately twisted his leg, permanently damaging it. Although he endured the pain silently, he told his master that he too would become lame and it came true.
Although Celsus’ narrative became widely accepted and was later quoted by Origen of Alexandria, the 10th-century Byzantine encyclopedia, Suda, has a different tale to tell about his disability. Although they admit that Epictetus was lame, they attribute this to rheumatism while Simplicius stated that he had been lame since childhood.
While living in Rome, he studied with a Stoic philosopher Gaius Musonius Rufus, who taught in Rome until 65 AD and then again from 68 to 71 AD. Although it is not verified, most scholars believe he studied with Rufus while working for Epaphroditus and with his permission. 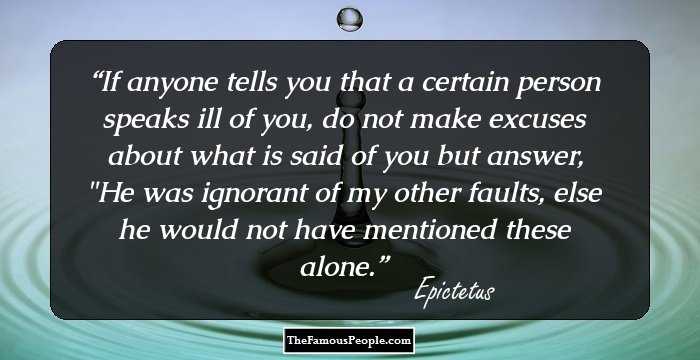 Quotes: You, Alone
Continue Reading Below
You May Like

Who Is The Most Popular BTS Member?
Freedman
Possibly in 68 AD, in the year his master left Rome, Epictetus became a freedman. Eventually, he began to teach Stoic philosophy in Rome, giving lectures especially on ethics, continuing to do for the next twenty-one years.
In 89 AD, the Roman Emperor Domitian banished all philosophers from Rome, possibly because they criticized his tyrannical rule. According to some sources, he was especially against the Stoic philosophers because his opponents were inclined towards Stoicism.
On being banished from Rome, Epictetus traveled to Nicopolis, at that time the capital city of the Roman province of Epirus Vetus. Now it falls under the modern state of Greece.
At Nicopolis, he opened a school, which soon became very popular, attracting the attention of many prominent Romans. According to one of his students, his popularity in those days far exceeded Pluto’s reputation in his time.
Among his students, L. Flavius Arrianus, later known as Arrian of Nicomedia, was the most famous. The little that we know about Epictetus comes mainly from his writings, which include 'The Discourses of Epictetus' and 'Enchiridion of Epictetus'. Demonax, the well-known Greek Cynic philosopher, was also his student. 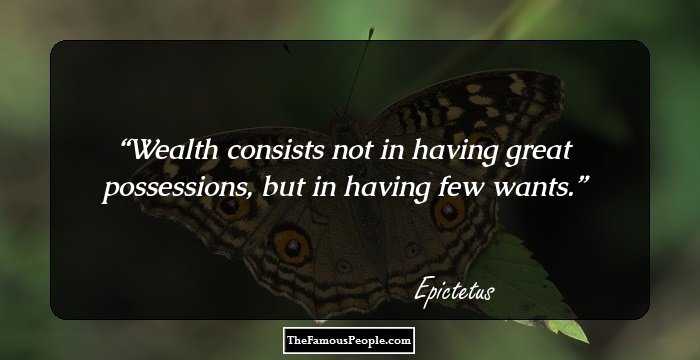 Teachings of Epictetus
Although some sources like ‘Suda’ have claimed that Epictetus wrote a lot, none of his works has survived. Therefore, to learn about his philosophy, we have to rely on works like 'The Discourses of Epictetus', in which his teachings have been recorded by his student Arrian of Nicomedia.
In his teachings, Epictetus described philosophy as learning “how it is possible to employ desire and aversion without hindrance”. Although originally the book came in eight volumes, only four have survived. From the very beginning, they have yielded tremendous influence and have been translated in several languages since the sixteenth century.
Personal Life & Legacy
According to most sources, Epictetus did not marry and led a frugal life in Nicopolis. However, he was not against marriage. He always told his students to get married and have children because it was the duty of each philosopher to leave behind somebody to carry forward his work.
Although he did not get married, he adopted a boy whose parents were about to abandon him, and raised him with the help of a woman. Some sources, however, claim that he married that woman at a later age.
He died in Nicopolis in 135 AD, at the age of 81. 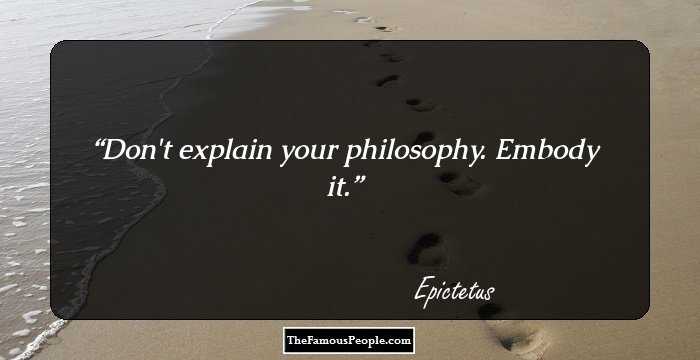 Trivia
The works of Epictetus have not only influenced past philosophers, but also people like James Bond Stockdale, a United States Navy vice admiral and aviator, taken a prisoner-of-war during the Vietnam War. He credits Epictetus with helping him to endure his more than seven years of captivity and torture.
You May Like

Quotes By Epictetus | Quote Of The Day | Top 100 Quotes

See the events in life of Epictetus in Chronological Order