Heraclitus was a Greek philosopher who was an independent thinker and unlike other ancient philosophers, he is not considered to belong to any particular school of thought. Born into an aristocratic family, he described himself as self-taught and was unsparing in his criticism of his predecessors and contemporary thinkers and philosophers. He was a loner who suffered from bouts of melancholia which prevented him from completing several of his works. His personality was characterized by a general contempt for mankind which coupled with the obscure nature of his works earned him the nickname the ‘Weeping Philosopher’. The ambiguous nature of his writings makes them open to several interpretations that are often of conflicting nature. He believed in the ever changing nature of the universe and the unity of opposites. His works have been influential in the development of the concept of ‘Logos’ which he considered a principle of order and knowledge. Regarded as one of the most important pre-Socratic philosophers, he was famous for departing from the accepted norms and traditions of his days and criticizing the generally accepted conventional wisdom of others who were deemed to be “wise” men by the society. Even though his own work was influenced by the works of his predecessors, he is regarded as a unique thinker who contributed immensely to the development of Western Philosophy. Chrysippus
Philosophers #41
Intellectuals & Academics #55
DID WE MISS SOMEONE?
CLICK HERE AND TELL US
WE'LL MAKE SURE
THEY'RE HERE A.S.A.P
Quick Facts

Also Known As: Heraclitus of Ephesus

Greek People
Greek Men
Male Philosophers
Greek Philosophers
Greek Intellectuals & Academics
Childhood & Early Life
Not much is known about Heraclitus’s birth and early life except for the fact that he was born into an aristocratic family in Ephesus (now in Turkey). His father’s name was either Bloson or Herakon.
As a youngster, he used to play knucklebones with other youths in a temple and considered kingship duties a burden. He abdicated the throne in favour of his brother.
Whatever is known about Heraclitus is known from the writings of Diogenes Laertius, who was a biographer of ancient Greek philosophers. According to Diogenes, Heraclitus was a hearer of Xenophanes though Heraclitus himself claimed to be self-taught. 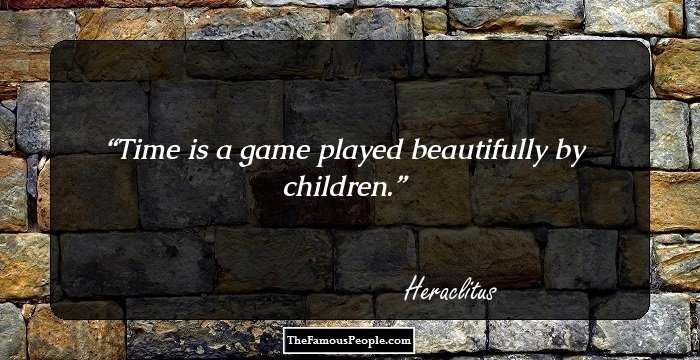 Quotes: Time, Children
Continue Reading Below
You May Like

The Best Black Actresses Of All Time
Later Years
Heraclitus is estimated to have lived and worked during the late 6th century BCE as inferred by his writings. Heraclitus has heavily criticized Homer, Hesiod, Pythagoras and Xenophanes who had flourished during the 6th century BCE or earlier, thus suggesting that he existed during the late 6th century BCE.
He had an inherent dislike for humanity and viewed the majority of human beings as ignorant and lacking in knowledge. He believed in breaking away from the accepted conventions and traditions and developing his own views.
He was a man of extreme views which he expressed in form of ambiguous phrases. His works are regarded as ‘riddles’ open to numerous interpretations.
No complete compilations of his works exist. His works exist only in form of fragments and sentences as quoted by other authors.
He had an unconventional approach towards wisdom and presented his works in the form of riddles and puzzles that contained hidden insights. The deeper understanding of his works depended upon the comprehension of his readers.
He adopted a unique method of teaching wherein he would present a situation using examples of simple objects like a river, boat, road, etc. to challenge the readers’ brains and allow them to derive their own conclusions.
His contribution to the development of the concept of ‘Logos’ is immense. The word logos in itself is subject to different interpretations, and it is a technical term in philosophy for a principle of order and knowledge.
He believed in the universal flux, i.e. everything is constantly changing, and in unity of opposites as suggested by his aphorism, ‘The road up and the road down are the same thing’.
Fire was the most basic element according to him. He was of the belief that all other elements originated from fire and thus it is fire that gave rise to all things. He considered the human soul to be composed of fire and water—fire being the noble part and water the ignoble.
Continue Reading Below
Some scholars consider him to a philosopher of nature while others believe he was a philosopher concerned with human condition. Heraclitus was of the view that theory of nature and human condition are intimately connected; he might have even been regarded a humanist if not for his deep contempt for mankind.
Heraclitus was a loner and did not take any students. However, his writings have influenced several philosophers from the early to the recent times. Plato and Hegel are amongst those deeply influenced by his thinking.
The Stoics, followers of a philosophical movement that presented philosophy as a way of life, derived their major principles from Heraclitus’s teachings, particularly his treatment of fire. 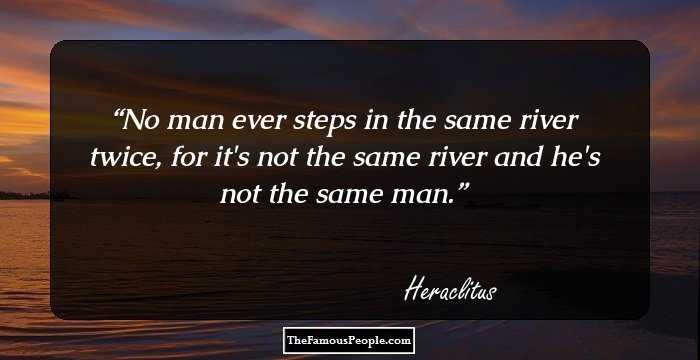 Major Works
He wrote a treatise ‘On Nature’ which was divided into three discourses—on nature, on politics and on the universe. The book was deposited in the temple of Artemis which served as a library during the ancient times. The book became very famous and many future philosophers referred to it.
Personal Life & Legacy
Heraclitus was a loner and did not have any students. He suffered from bouts of melancholia.
During his later years he suffered from dropsy. Frustrated at the physicians’ inability to find a cure, he treated himself with cow manure which resulted in his death. 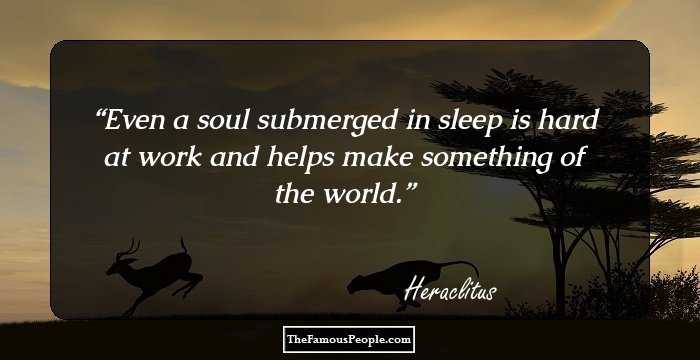 Quotes: Soul
Trivia
This famous philosopher was also known as ‘the obscure’
You May Like

Quotes By Heraclitus | Quote Of The Day | Top 100 Quotes

See the events in life of Heraclitus in Chronological Order