Aristotle was a Greek philosopher and scientist, better known as the teacher of Alexander the Great. He was a student of Plato and is considered an important figure in Western philosophy. Famous for his writings on physics, metaphysics, poetry, theater, music, logic, rhetoric, linguistics, politics, government, esthetics, ethics, biology, zoology, economics, and psychology, he was considered much ahead of his time. His writings constitute the first comprehensive system of Western philosophy which includes views on morality and aesthetics, logic and science, politics and metaphysics. This system became the supporting pillar of both Islamic and Christian scholastic thought. It is even said that he was perhaps the last man who had the knowledge of all known fields at the time. His intellectual knowledge ranged from every known field of science and arts of that era. One of his greatest achievements was formulating a finished system of logical reasoning, also known as the Aristotelian syllogistic. His other significant contribution was towards the development of zoology. It is true that Aristotle’s zoology is now obsolete but his work and contribution was unchallenged till the 19th century. His contribution towards several subjects and its influence make him one of the most famous and top personalities of all time. Chrysippus
DID WE MISS SOMEONE?
CLICK HERE AND TELL US
WE'LL MAKE SURE
THEY'RE HERE A.S.A.P
Quick Facts

Greek People
Greek Male
Male Philosophers
Greek Philosophers
Greek Intellectuals & Academics
Childhood & Early Life
Aristotle was born in 384 BC in Stagira, Chalcidice, which is approximately 55km east of Thessaloniki. His father Nicomachus named him Aristole, which means “the best purpose.” His father served as a personal physician to King Amyntas of Macedon.
Though not much information is available on his childhood, sources throw light on the fact that he spent time in the Macedonian palace from where he connected with the Macedonian monarchy.
Being a physician’s son, he was inspired by his father’s scientific work but didn’t show much interest in medicine.
When he turned 18, he moved to Athens to pursue his education at ‘Plato’s Academy.’ He left Athens somewhere in 348-347 BC, after spending almost 20 years in the city.
The traditional stories say that he left Athens as he was displeased with the Academy’s direction when Plato's nephew Speusippus took over the academy after Plato’s death. However, it is also said that he feared anti-Macedonian sentiments and could have left before the death of Plato.
Thereafter, he moved to the court of his friend Hermias of Atarneus in Asia Minor along with his friend Xenocrates. He then traveled to the island of Lesbos, accompanied by Theophrastus, where they did in-depth analysis of zoology and botany of the island.
In 343 BC, after the death of Hermias, Philip II of Macedon invited him to become the tutor of his son Alexander. 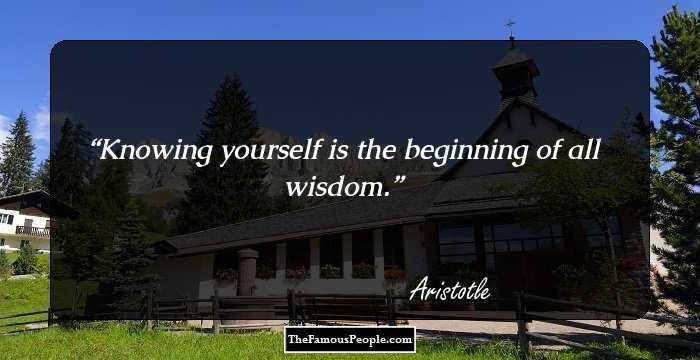 Quotes: Yourself
Continue Reading Below
Career
Aristotle became the head of the royal academy of Macedon. Here, he became a tutor, not only to Alexander but also to two other future kings — Cassander and Ptolemy. In his role as a tutor to Alexander, he encouraged him to conquer east.
In 335 BC, he returned to Athens where he established his own school called ‘Lyceum.’ For the next 12 years, he taught various courses at his school.
There came a time when the relationship between Alexander and Aristotle became estranged. This was probably due to Alexander’s relationship with Persia. Though there is little evidence, many believed that Aristotle played a role in Alexander’s death.
After Alexander’s death, anti-Macedonian sentiment in Athens flared. In 322 BC, Eurymedon the Hierophant castigated him for not holding the gods in honor, and Aristotle fled to Chalcis, his mother’s family estate. 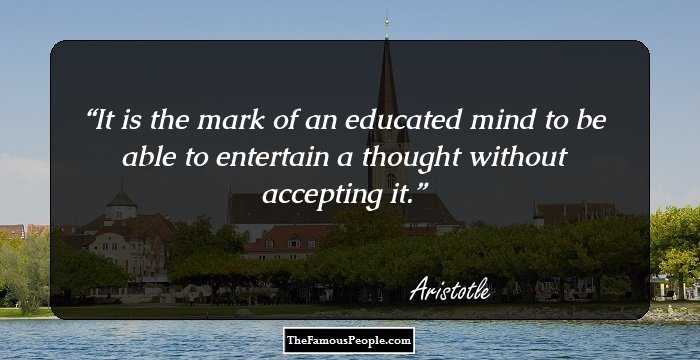 Thoughts & Contributions
Aristotle is believed to have put together his thoughts during 335-323 BC. He wrote a number of dialogues in this period. Unfortunately, only fragments of these pieces have survived and are in the form of treatises. These were not intended for wide publication and were rather meant to be used as lectures to students. ‘Poetics,’ ‘Metaphysics,’ ‘Politics,’ ‘Physics,’ ‘De Anima,’ and ‘Nicomachean Ethics’ are considered to be his most important treatises.
He not only studied almost every subject but also made noteworthy contributions to many of them. Under science, Aristotle studied and wrote on astronomy, anatomy, embryology, geology, geography, meteorology, zoology, and physics. Under philosophy, he wrote on ethics, aesthetics, government, politics, metaphysics, economics, rhetoric, psychology, and theology. In addition to all the above, he also studied literature, poetry, and customs of various countries.
Aristotle studied and wrote on numerous subjects and topics, but unfortunately only one third of his original writings survived. The lost writings include poetry, letters, dialogues, and essays written in Platonic manner. Most of his literary works are known to the world through the writings of Diogenes Laertius and others.
Contributions to Philosophy
Just like his teacher Plato, his philosophy also aims at the universe, but his ontology finds the universal in particular things, thus his epistemology is based on the study of specific phenomena that exists or happens in the world and it rises to the knowledge of essence.
Continue Reading Below
He also discussed how information can be drawn from objects through deduction and inferences. It was his theory of deduction that was shaped into ‘Syllogism’ by modern philosophers. The pairs of propositions were termed as “Contraries” by him. Syllogism is a logical argument in which the inference of the conclusion is drawn from two or more other premises of a certain form. This was explained by him in his work ‘Prior Analytics’ where he defined the main components of reasoning through exclusive and inclusive relationships. In later years, these were shown through Venn Diagrams.
His philosophy not only provided a system of reasoning but it was also related to ethics. He had described a ‘moral code of conduct’ which he referred to as “good living” in Nichomachean Ethics.
He also talked about Practical Philosophy where he considered ethics to be a part of practical rather than theoretical study. His work titled ‘Politics’ threw light on the city. According to him, city is a natural community. “Man is by nature a political animal” is what he stated.
He has been given credit for being the earliest to study formal logic. The famous philosopher Kant said in his book ‘The Critique of Pure Reason’ that Aristotle’s theory of logic formed the basis of deductive inference. 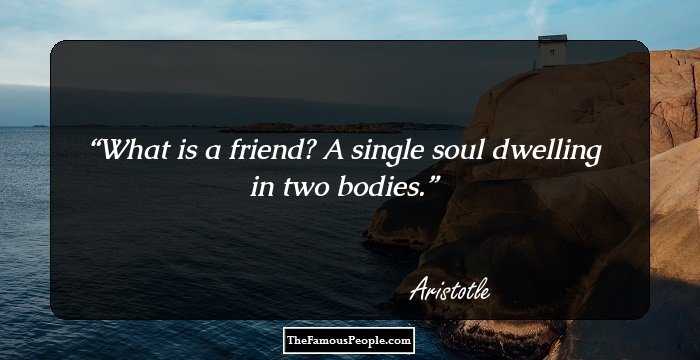 Quotes: Soul
Contributions to Science
Though he can’t be termed as a scientist by today’s definition, science was one of the spheres he extensively researched and studied, especially during his stay at ‘Lyceum.’ His belief was that interaction with physical objects helps in gaining knowledge.
He also conducted research in biology. He classified animals into species on the basis of blood. Animals with red blood were majorly vertebrates and bloodless animals were termed as ‘cephalopods.’ There was relative inaccuracy in this hypothesis, yet it was regarded as the standard system for many years.
He closely examined marine biology as well. He examined the anatomy of marine beings through dissection. It is interesting to note that unlike his biological classifications, his observations on marine life were quite accurate.
His treatise ‘Meteorology’ provides evidence that he also studied earth sciences. By meteorology, he simply didn’t mean the study of weather but it also included extensive study about water cycle, natural disasters, astrological events, etc.
Continue Reading Below
Contributions to Psychology
Many scholars consider Aristotle as the true father of psychology, since he is responsible for the theoretical and philosophical framework that contributed to psychology's earliest beginnings.
His book ‘De Anima’ (On the Soul) is considered as the first book on psychology.
He was concerned about the relation between the psychological processes and the underlying physiological phenomenon.
He argued that mind has the power to function without a body, and it is immaterial and immortal.
He postulated that intellect consists of two parts: passive intellect and active intellect.
According to him, music, poetry, comedy, tragedy, etc were imitative. He also said that these imitations were varied by medium, manner, or object. His belief was that imitation was a natural part of humans and served as one of the main advantages of mankind over animals.
Major Works
Aristotle wrote around 200 works and most of them were in the form of notes and drafts. These works comprise of dialogues, records of scientific observations, and systematic works. These works were looked after by his student Theophrastus and then by Neleus.
His major works include ‘Rhetoric’ and ‘Eudemus’ (On the Soul). He also wrote on philosophy, Alexander, Sophistes, justice, wealth, prayer, and education.
‘Poetics,’ ‘Metaphysics,’ ‘Politics,’ ‘Physics,’ ‘De Anima,’ and ‘Nicomachean Ethics’ are considered to be his most important treatises.
Continue Reading Below
Aristotle’s work on ‘Poetics’ comprised of two books — one was on tragedy and the other on comedy.
Personal Life & Legacy
During his stay in Asia Minor, Aristotle married Pythias who is said to be the niece or adoptive daughter of Hermias. A daughter was born to the couple whom they also named Pythias.
After the death of his wife Pythias, he tied the knot with Herpyllis of Stagira, who bore a son. He named his son after his father Nicomachus.
According to the Suda (a 10th-century Byzantine encyclopedia of the ancient Mediterranean world), Aristotle had an erotic relationship with Palaephatus.
He breathed his last in 322 BC in Euboea due to natural causes. Before his death, he named his student Antipater as the chief executor. He also wrote a will in which he desired to be buried next to his wife.
Trivia
More than 2,300 years have passed, yet Aristotle remains as one of the most influential people ever born. His contributions were seen in almost every field of human knowledge that existed during his time. He was also the founder of many new fields.
He was the one who founded formal logic and was also a pioneer in the study of zoology.
Theophrastus, his successor at ‘Lyceum,’ wrote a number of books on botany which were considered the basis of botany till the middle-ages. Few names of the plants mentioned by him survived till modern times. From a modest beginning, ‘Lyceum’ grew into a Peripatetic school. Other notable students from ‘Lyceum’ were Aristoxenus, Dicaearchus, Demetrius of Phalerum, Eudemos of Rhodes, Harpalus, Hephaestion, Mnason of Phocis, and Nicomachus.
His influence on Alexander cannot be ignored. It was because of his influence that Alexander used to carry large groups of botanists, zoologists, and researchers along with him during his expeditions.
Continue Reading Below
Aristotle also influenced Byzantine scholars, Islamic theologians, and Western Christian theologians, leaving future scientists, philosophers, and thinkers indebted.
He was also a collector of proverbs, riddles, and folklore. His school especially studied riddles of Delphic Oracle and the fables of Aesop.
Top 10 Facts You Did Not Know About Aristotle
He is credited as the first genuine scientist in history by the ‘Encyclopædia Britannica.’
Aristotle was well known among medieval Muslim intellectuals and was revered as "The First Teacher."
Aristotle has been accused of misogyny and sexism by scholars of feminist metaphysics.
It is believed that ‘The Nicomachean Ethics,’ a compilation of Aristotle’s lecture notes, is named after his son who died young in a battle.
He was a geocentrist who believed that the earth is the centre of the universe.
He gave more accurate theories on some optical concepts than other philosophers of his day.
Aristotle distinguished about 500 species of birds, mammals, and fishes. His classification of living things contains some elements which existed in the 19th century.
In his treatise ‘On the Soul,’ he proposed three kinds of souls: the vegetative soul, the sensitive soul, and the rational soul.
Aristotle is considered to be the founder of formal logic.
He mentored several brilliant young minds, many of whom, including Aristoxenus, Dicaearchus, Demetrius of Phalerum, Mnason of Phocis, Nicomachus, and Theophrastus went on to become great thinkers in their own rights.

Quotes By Aristotle | Quote Of The Day | Top 100 Quotes

See the events in life of Aristotle in Chronological Order