Thales, better known as Thales of Miletus, was an ancient Greek philosopher, mathematician, astronomer and businessman, born in the seventh century BCE in the area now known as Asia Minor. Recognized as one of the Seven Sages of Greece, his main contribution lies in trying to provide scientific explanation behind worldly phenomenon that had been hitherto explained by mythological beliefs. For this, Aristotle had called him the first philosopher in Greek tradition. Unfortunately, neither his works nor any contemporary source has survived. Available information about this pre-Socratic philosopher comes mainly from the writings of Greek historian Diogenes Laërtius, who flourished in the 3rd century AD and had quoted Apollodorus of Athens, who lived around 140 BCE. Because of the time gap, it is very difficult to assess his works or give any personal details about him. Indeed, modern scholars have now started casting doubts on numerous acts and sayings that had been attributed to Thales. All said and done, there is no doubt that Thales was a multi-dimension figure, much revered in his own time and thereafter.

Hipparchus
DID WE MISS SOMEONE?
CLICK HERE AND TELL US
WE'LL MAKE SURE
THEY'RE HERE A.S.A.P
Quick Facts

Also Known As: Thales of Miletus

Greek People
Philosophers
Mathematicians
Greek Men
Childhood & Early Years
According to Apollodorus of Athens, a Greek scholar belonging to the 2nd century BCE, Thales was born in 624 BCE in the ancient Greek city of Miletus, located on western coast of Anatolia near the mouth of the River Maeander. Presently, it falls under the Aydın Province of Turkey.
Although the date has been corroborated by current historians, who place the year of his birth in the middle of 620s BCE, there is a controversy about the place. While most scholars accept Apollodorus’ views some claim that he was born in Phoenicia, later immigrating to Miletus with his parents.
Thales’ biographer, Diogenes Laërtius, writing in the 3rd century AD, informs us that Thales' parents, Examyes and Cleobuline, were wealthy and distinguished Phoenicians. But there is a controversy about this as well.
According to many scholars, his father’s name, Examyes, was distinctly Carian rather than Semitic. Since by then the Carians have been completely assimilated by the Ionians, many believe they were actually of Milesian descent. However, nobody refutes the fact that they were wealthy and distinguished.
That Thales had at least one sibling is evident from the fact that in later years he adopted his nephew, Cybisthus. Otherwise, nothing is known about Thales’ formative years.
It is possible that he joined the family business early in his life, visiting Egypt and Babylonia in course of trading. At that time, both Egypt and Babylonia were intellectually more advanced than the Greek, being masters in mathematics and astronomy.
Thales must have come in contact with the teachers in Egypt and Babylonia because we find him returning to Egypt to study geometry with the Egyptian priests. Later, he traveled to Babylonia to study mathematics. Other sources assume that, coming from rich family, he was automatically sent to study abroad. 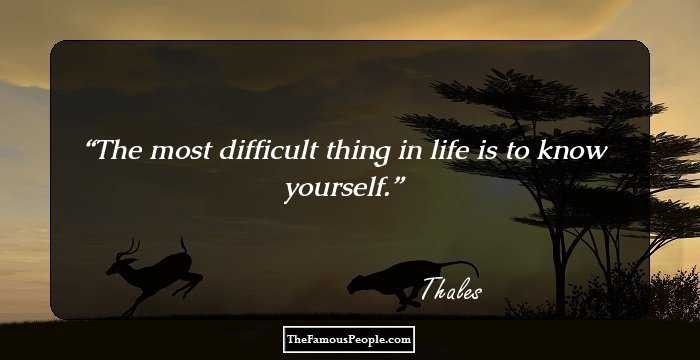 Quotes: Life
Continue Reading Below
Academic Life
Proclus, the fifth century Greek philosopher, tells us that on his return from Egypt, Thales introduced geometry into Greece. From his writings, we can assume that he began his career as a teacher and a thinker, subsequently discovering many propositions, instructing his ‘successors’ in many others.
Although he was a thinker, his knowledge was not at all bookish. In those days, when problems were explained with the help of mythology, he applied the method of deduction and reasoning, using his knowledge for practical purposes.
Thus unknowingly, he became a pioneer in discovering new scientific method in mathematics and allied fields, such as astronomy and engineering. Measuring the height of a pyramid with the help of its shadow is believed to be one of his early achievements. 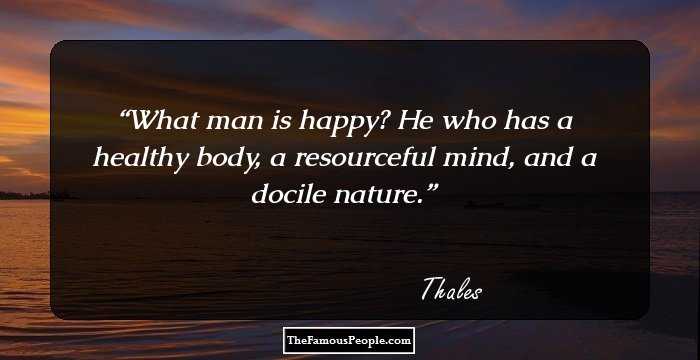 In Business
In a trading city like Miletus, it was unthinkable that anyone should spend so much time in ‘thinking’. As a result of this, although Thales became famous as a philosopher he was mocked by one and all.
One day, while walking down the street with his gaze fixed at the sky, he fell into a ditch. Seeing this, a servant girl began to laugh, saying that if he did not know what lay at his feet how he could expect to know what was in the sky.
Others mockingly said if he was so clever how come he earned so little. At last, he decided to take up the challenge and went into business. His intention was not to earn money, but to show that one could become rich simply by using knowledge.
By correctly predicting the weather, he predicted a large olive crop in a particular year. According to one version, he then bought all the olive presses in the city, making a lot of money when the fruit was finally harvested.
Aristotle offers us another version of the same story. According to him, Thales did not buy the presses, but booked all of them in advance and when the olive was harvested he hired them out at a high rate, thus making his riches.
Continue Reading Below
Political Advisor
It is natural that a man as wise as Thales would be invited by the king to act as an advisor. It happened during the five-year long war, which broke out between King Cyaxares of Media and King Alyattes of neighbouring Lydia.
As the war continued into the sixth year, Thales predicted the solar eclipse of May 28, 585 BCE. In those days eclipses were taken as an omen and as a near total eclipse occurred as predicted by Thales, the war immediately came to a halt.
The event has been recounted by Xenophanes, a poet and philosopher who lived in the same century as Thales. However, modern scholars cast doubt on the incident, claiming Thales could not have predicted its locality, time or nature so accurately. Nonetheless after this event, the two states became an ally.
Lydia now joined Media in their fight against Persia. As Lydia’s army marched towards present day Iran, Thales accompanied them, possibly on the invitation of the king. As they came to the bank of River Kızılırmak, also known as the Halys River, they had to stop.
Thales advised the king to dig canal upstream, which on diverting most of the water, made the river crossable downstream. However, Herodotus, who had mentioned this incident, was himself skeptical about it.
The war between Lydia and Persia ended in Lydia’s defeat. As Miletus did not take part in the conflict, they were spared by the Persians. On returning home, Thales advocated a confederation of the Ionians, with individual states becoming its demoi or districts. All states except Miletus joined the confederation. 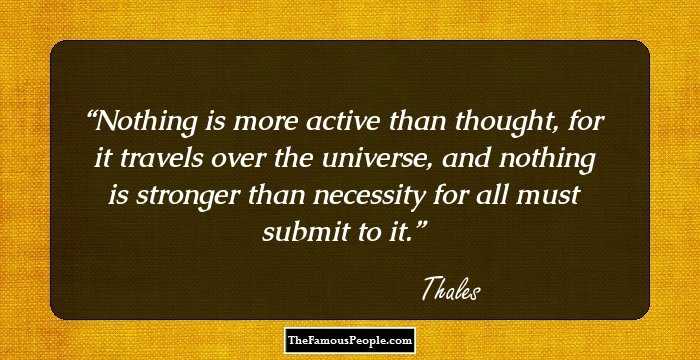 Major Contributions
Although none of his original writings have survived, some of the ancient scholars claim that Thales had written two books, ‘On the Solstice’ and ‘On the Equinox’. While many are skeptical about this, most credit him with discovery of five geometrical theorems.
The fives theorems ascribed to him are: a circle is bisected by its diameter; angles in a triangle opposite two sides of equal length are equal; opposite angles formed by intersecting straight lines are equal; the angle inscribed inside a semicircle is a right angle; a triangle is determined if its base and the two angles at the base are given.
While the ancient people ascribed divine fury behind earthquakes, Thales tried to give it a more rational base. According to him the earth floated on an expanse of water and earthquakes occur when the water becomes turbulent. Thales also declared that everything on earth had originated from water.
Personal Life & Legacy
There is a contradiction about Thales’ marital status. According one source, Thales never got married. When he was younger, he used to say that it was too early to get married, later reversing his statement to say that it was too late. For a family, he adopted his nephew Cybisthus.
According to some other sources, Thales did get married, fathering Cybisthus. But it does not seem to be true. According to Plutarch, when Solon, on a visit to Thales, asked him why he did not get married Thales told him that he did not want to worry about raising children.
According to the chronicle of Apollodorus of Athens, Thales suffered a heat stroke while he was watching the 58th Olympiad (548–545 BC) and died from it at the age 78.
Today, he is remembered as the first person in Western civilization to engage in scientific philosophy, trying to explain the worldly phenomenon through science rather than by mythological beliefs.
Thales is believed to have founded the Milesian school of thought.
Trivia
It is traditionally believed that Thales advised navigators to steer by Ursa Minor, rather than by Ursa Major.
Thales believed that magnets were living things, possessing souls, by virtue of which they are capable of attracting iron.
Recommended Lists:
Scientists #67
Intellectuals & Academics #220

See the events in life of Thales in Chronological Order