Desmond Tutu was a South African social rights activist and retired Anglican bishop, who served as the first black Archbishop of Cape Town. A leading spokesperson for the rights of black South Africans, he helped to draw international attention to the sorry state of apartheid in South Africa. Born into an impoverished family in Transvaal, he grew up watching people of color being discriminated against for no fault of theirs. Even though he was young, it did not take him long to realize that it was wrong to mistreat someone just because their skin color was different. As a teenager, he aspired to be a doctor but could not pursue medical studies due to lack of funds. He then studied to become a teacher. He worked for a few years during which he tried his best to encourage his students to become the best that they can be. Alongside he also studied theology and was ordained as a priest. At that time South Africa was reeling under apartheid and black South Africans were grossly discriminated against in all aspects of life. Frustrated, he became active in the anti-apartheid movement and soon emerged as outspoken advocate of black rights. He soon garnered international fame for his works and was honored with the 1984 Nobel Prize for Peace. William Booth
DID WE MISS SOMEONE?
CLICK HERE AND TELL US
WE'LL MAKE SURE
THEY'RE HERE A.S.A.P
Quick Facts

South African Celebrities
Priests
Theologians
Black Activists
Social Activists
Childhood & Early Life
Desmond Mpilo Tutu was born on October 7, 1931, in Transvaal, South Africa, to Zacheriah Zililo Tutu and his wife, Aletta Tutu, as one of their four children. His father was an elementary school principal and his mother cooked and cleaned at a school for the blind.
He grew up watching how the blacks were discriminated against and deprived of the basic rights that whites enjoyed. When he was a child, black South Africans were not allowed to vote and the society was rigidly segregated.
Even though his family was poor, Tutu and his siblings made the most of what was available and had a fairly happy childhood.
He went to the Johannesburg Bantu High School where he received a good education and graduated in 1950. His childhood dream was to be a doctor and he was accepted into medical school. However, he could not study medicine as his parents could not afford the expensive fees.
He then received a scholarship to study education at Pretoria Bantu Normal College which he accepted. He earned his teacher's certificate in 1953. He furthered his education from the University of South Africa and graduated in 1954. 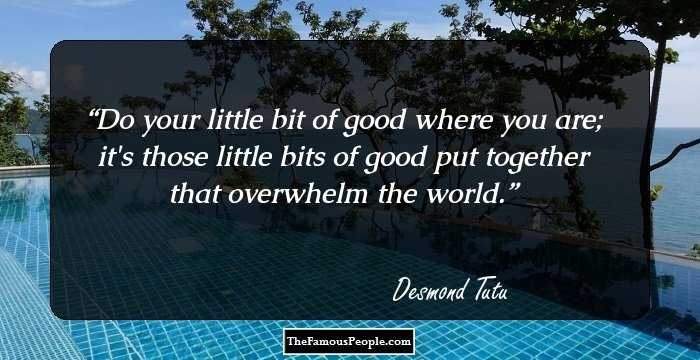 Quotes: You, Together
Continue Reading Below
Early Career
He returned to his alma mater, Johannesburg Bantu High School, as a teacher. He also taught for sometime at Munsienville High School in Mogale City. The government passed the Bantu Education Act in 1953. The law lowered the standards of education for black South Africans and greatly limited their chances of receiving good quality higher education.
For a few years he tried his best to provide good education to his students in spite of the legal limitations, but grew increasingly frustrated at this Act which explicitly promoted inequality. Unwilling to be a part of the corrupt education system anymore, he resigned from his teaching job in 1957.
He then continued his education, this time studying theology at St Peter's Theological College in Rosettenville, Johannesburg. He was ordained as an Anglican deacon in 1960 and as a priest in 1961.
He went to England in 1962 to pursue further theological studies at the King's College London and received his master's degree in theology in 1966. He returned to South Africa in 1967.
He began teaching at the Federal Theological Seminary at Alice in the Eastern Cape and also became the chaplain at the University of Fort Hare in 1967. He lectured at the National University of Lesotho from 1970 to 1972.
He returned to England in 1972 where he was appointed vice-director of the Theological Education Fund of the World Council of Churches, at Bromley in Kent. After serving there for three years he came back to South Africa.
In 1975, he was appointed Dean of St. Mary's Cathedral in Johannesburg, the first black person to hold that position. 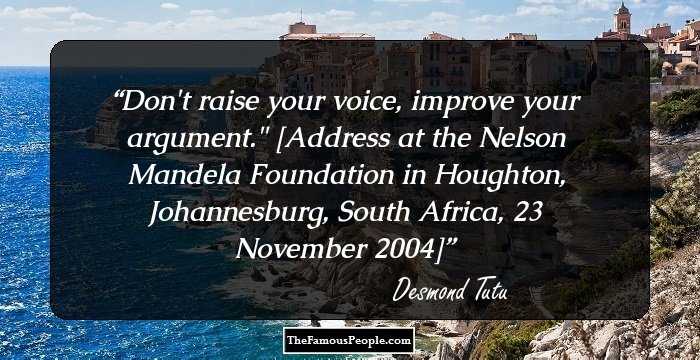 Fight Against Apartheid
Desmond Tutu became a prominent spokesperson for the rights for blacks as the Dean of St. Mary's Cathedral. He realized that he had been given a platform that had never before been offered to a black, and resolved to use his position to fight against the injustices meted out to blacks in his country.
Continue Reading Below
He was appointed Bishop of Lesotho in 1976 and two years later, he was selected as the General Secretary of the South African Council of Churches in 1978. As he rose up through the South African religious hierarchy, he increased his involvement in the anti-apartheid stance.
He was an outspoken activist and wrote extensively against apartheid. He often compared apartheid to Nazism, incurring the wrath of the government which revoked his passport twice. He was also very active in the protest marches which led to his arrest and imprisonment in 1980. Despite his staunch disapproval of apartheid, he advocated non-violent means of protest.
In 1983, a new constitution was proposed for South Africa to defend against the growing anti-apartheid movement. Tutu played a pivotal role in the formation of the National Forum Committee to fight the constitutional changes.

In 1985, Tutu was appointed the Bishop of Johannesburg and was chosen to be the Archbishop of Cape Town the following year, becoming the first black person to hold the highest position in the South African Anglican Church.
He was named the president of the All Africa Conference of Churches in 1987 and held this position until 1997.

In 1993, apartheid in South Africa finally came to an end, due in no small part to Tutu’s relentless campaigning and able leadership. The nation’s first black president, Nelson Mandela, was elected in 1994, and Tutu was given the honor of introducing the new president to the citizens.

After the end of apartheid, he was selected by President Mandela to head the Truth and Reconciliation Commission. He retired as Archbishop of Cape Town in 1996.

Post his retirement, he worked as a global activist on issues pertaining to democracy, freedom and human rights.
Continue Reading Below 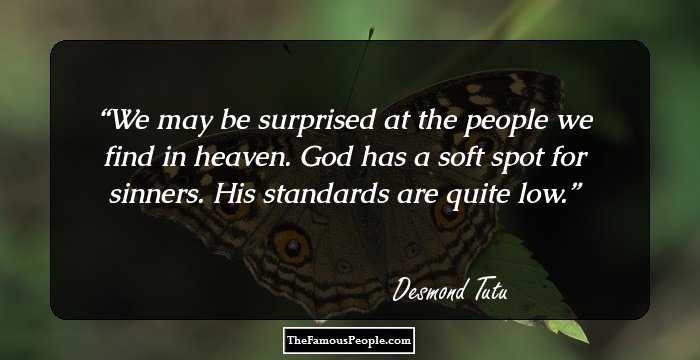 Quotes: God
Major Works
Desmond Tutu played a major role in bringing an end to the era of apartheid in South Africa. As the Bishop of Lesotho and later the General Secretary of the South African Council of Churches, he used his position to attraction international attention to the situation of apartheid in the nation. His brave leadership and tireless non-violent campaigning played a significant role in leading to the end of South African apartheid.
Awards & Achievements
Desmond Tutu was awarded the 1984 Nobel Peace Prize for his "role as a unifying leader figure in the campaign to resolve the problem of apartheid in South Africa".
In 1992, he was awarded the Bishop John T. Walker Distinguished Humanitarian Service Award.
He became the first recipient of the newly created Archbishop of Canterbury's Award for Outstanding Service to the Anglican Communion in 1996.
He received the Wallenberg Medal from the University of Michigan in recognition of his lifelong work in defense of human rights and dignity in 2008. The same year, he was also awarded the J. William Fulbright Prize for International Understanding.
Personal Life & Legacy

Desmond Tutu married Nomalizo Leah Shenxane, a teacher, in 1955. They had four children.

He was diagnosed with prostate cancer in 1997 and underwent successful treatment in the U.S.

Continue Reading Below
Top 10 Facts You Did Not Know About Desmond Tutu
Desmond Tutu has campaigned for several causes including the fight against HIV/AIDS, tuberculosis, poverty, racism, sexism, the imprisonment of Chelsea Manning, homophobia and transphobia.
His house on Vilakazi Street in Soweto, Johannesburg, is registered as part of Johannesburg's historical heritage.

He authored seven collections of sermons and other writings.

Nick Butterworth, The British children author, dedicated his book ‘The Whisperer’ to Tutu.
Miles Davis' 1986 album ‘Tutu’ is dedicated to Desmond Tutu.
Tutu contacted Virgin Radio on 15 October 2007 in the "Who's Calling Christian" phone-in where famous people ring in to raise a substantial amount of money for charity.
He donated some of his own cells to the ongoing effort to research the diversity of the human genome.
Tutu joined the project "Soldiers of Peace", a movie against all wars and for a global peace in 2009.

He was one of the patrons of The Forgiveness Project and delivered the charity's inaugural annual lecture in 2010.

He supports assisted dying and believes that life shouldn't be preserved "at any cost".
Recommended Lists:
Miscellaneous #166
Activists #7
Intellectuals & Academics #133

Quotes By Desmond Tutu | Quote Of The Day | Top 100 Quotes

See the events in life of Desmond Tutu in Chronological Order