Karl Barth, a Swiss Reformed theologian, is often regarded as the greatest Protestant theologian of the twentieth century. Beginning with his experience as a pastor, he rejected the predominant liberal theology typical of 19th-century European Protestantism. He became a leader in the Confessing Church in Germany, which actively opposed Adolf Hitler and the Nazi regime. In particular, he and other members of the movement vigorously attempted to prevent the Nazis from taking over the existing church and establishing a state church controlled by the regime. He authored the Barmen Declaration, which fiercely criticized Christians who supported the Nazis. An extremely voluminous writer, his most famous works are: ‘The Epistle to the Romans’, which marked a clear break from his earlier thinking; and his massive thirteen-volume work ‘Church Dogmatics’, one of the largest works of systematic theology ever written. His major contribution was a radical change in the direction of theology from a 19th-century orientation toward progress to an orthodoxy that had to cope with the grim realities of the 20th century especially in the post WW II period. Theologians such as Dietrich Bonhoeffer — who like Barth became a leader in the Confessing Church —Thomas Torrance, Reinhold Niebuhr, Stanley Hauerwas, Jürgen Moltmann, and novelists such as John Updike and Miklós Szentkuthy were greatly influenced by him.
Continue Reading Below Swiss Celebrities
Swiss Men
Swiss Theologians
Swiss Intellectuals & Academics
Taurus Men
Childhood & Early Life
Karl Barth was born on May 10, 1886, in Basel, Switzerland, to Johann Friedrich "Fritz" Barth, a theology professor and pastor who would greatly influence his son's life, and Anna Katharina (Sartorius) Barth.
From 1904 to 1909, Barth studied theology in Bern, Berlin, Tübingen, and Marburg. He studied under Adolf von Harnack and Wilhelm Herrmann and was attracted to the works of Friedrich Schleiermacher. 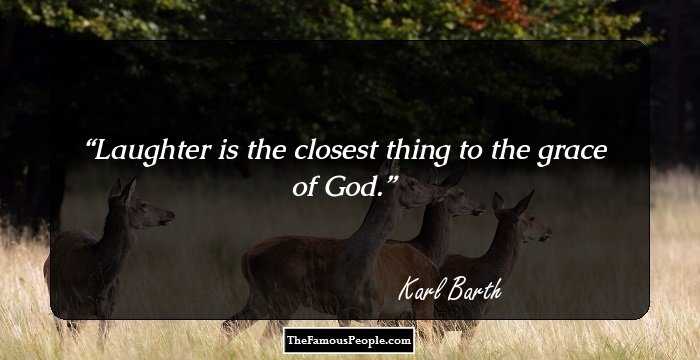 Who Is The Most Popular BTS Member?
Career
From 1911 to 1921, Barth was a parish minister. Soon after the start of WWI, Barth was shocked when many of his teachers signed their allegiance to the war plans of the German government.
Liberal theology failed to stand up against culture and many of his teachers had forsaken the gospel. Disillusioned, he sought a completely new theological foundation by rereading and interpreting the scripture.
Post WW I, he came to be associated with a movement known as Dialectical Theology in Protestantism which strongly emphasized the revelation of God by God as the source of Christian doctrine.
His research on Paul’s Letter to the Romans yielded, ‘The Epistle to the Romans’, in 1922. In this book he argued that the God rejects any attempt to ally God with human cultures, achievements, or possessions.
The Barmen declaration became the founding document of the Confessing Church. He was elected a member of its leadership council, the Bruderrat and opposed government-sponsored efforts to Nazify the German Protestant church.
He was dismissed from his professorship at the University of Bonn, in 1935, for refusing to swear an oath to Hitler. He assumed a chair in systematic theology at the University of Basel, Switzerland.
In his book, ‘The Holy Spirit and the Christian Life’, published in 1938, he insists that God is revealed to us in three distinct ways, yet with a unity that cannot be divided.
After WWII, he joined efforts for German penitence and reconciliation with churches abroad. Together with Hans-Joachim Iwand, he authored the Darmstadt Statement in 1947, a statement of German guilt and responsibility for the War.
The Darmstadt Statement declared that the Church's willingness to side with anti-socialist and conservative forces had led to Nazism. In the Cold War scenario, this statement was rejected by Western anti-Communists, who supported re-militarization.
Continue Reading Below
Invited back to Bonn, he delivered the series of lectures published in 1947 as D’ogmatics in Outline’ which followed, more or less, the presentation of the Christian faith found in the Apostle’s Creed.
Karl Barth's ‘Deliverance to the Captives’, is a collection of sermons published in 1961, most of which were preached at a prison in Basel, Switzerland, to communicate the gospel message as revealed by Christ.
In 1962, he visited the USA and lectured at Princeton Theological Seminary and the University of Chicago. 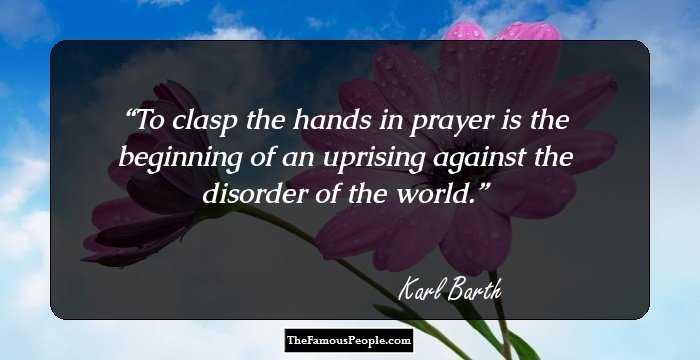 Major Works
His book, ‘The Epistle to the Romans’, published in 1922, stressed the “the importance of revelation and salvation as acts of God, not humanity. Like the existentialist philosophy’ it emphasized the distinction between God and humanity.
‘Church Dogmatics’, Barth’ thirteen-volume magnum opus was published in stages from 1932 to 1967. He presented the Christian doctrine as entirely Christo-centric and Jesus Christ as the unique and complete Word of God..
Personal Life & Legacy
In 1913, Karl Barth married Nelly Hoffmann, a talented violinist. They had a daughter and four sons, one of whom was the New Testament scholar Markus Barth.
Charlotte von Kirschbaum, his pupil, was invited by Barth to move into the Barth household. This offended his wife and his children suffered the stress of the relationship.
He died on December 10, 1968, in Basel, at the age of 82.
The Center for Barth Studies at Princeton Theological Seminary was established in 1997. It is dedicated to supporting scholarship related to his work and contains nearly all of his works in English and German. 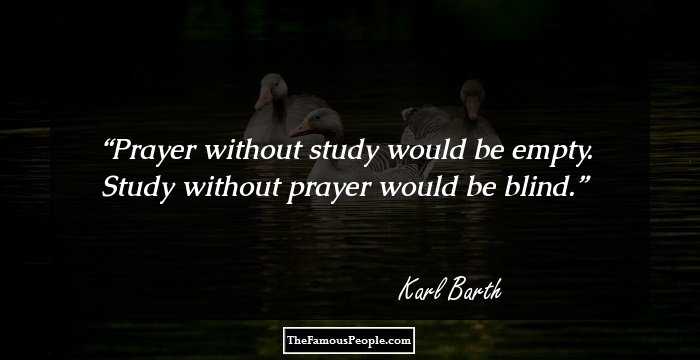 Trivia
This Swiss theologian declared, “Jesus does not give recipes that show the way to God as other teachers of religion do. He is himself the way”.
Replying to a question while on a trip to the U.S, this theologian said, “Jesus loves me, this I know, for the Bible tells me so?”
You May Like

See the events in life of Karl Barth in Chronological Order