Daniel Ortega is best known for being the long-time president of the Central American nation of Nicaragua. Born in a remote village, Ortega was raised by his activist parents. After his father saw action in a civil war, he and his wife became adamantly opposed to the ruling dictator. Although Daniel's mother was arrested on political charges, he joined the protest movement while in his young teens and was soon arrested himself. Daniel became radicalized while in prison and became persuaded to participate in a bank robbery, to finance the revolutionary guerillas. After a political deal secured his liberty, he immediately returned to his revolutionary group, and after a protracted struggle, managed to overthrow the government. Leading a ruling junta, Ortega soon consolidated his grip on the country, and quickly implemented diverse social reforms. As foreign powers tried to overthrow him by financing armed resistance groups in neighboring countries, Ortega maintained a steady hand on his country for one term in office but then subsequently faded to the background of Nicaraguan politics for the next decade. Returning from the ashes, his party swept to victory and Ortega now comfortably holds the reins of power in his country. Although the global political climate has changed since his first term in office, Ortega continues to stubbornly lead his country on an independent path, away from undue influence from neighboring superpowers Violeta Chamorro
Political Leaders #534
Presidents #118
Leaders #654
Continue Reading Below
DID WE MISS SOMEONE?
CLICK HERE AND TELL US
WE'LL MAKE SURE
THEY'RE HERE A.S.A.P
Quick Facts

Nicaraguan People
Nicaraguan Men
Male Leaders
Scorpio Leaders
Nicaraguan Leaders
Childhood & Early Life
José Daniel Ortega Saavedra was born on November 11, 1945 in La Libertad, Nicaragua. His father, Daniel Ortega Cerda, and his mother, Lidia Saavedra, were political activists who protested against the government.
Because of her political opposition to the ruling dictator,Anastasio Somoza, Daniel's mother was imprisoned. He has two brothers, Humberto and Camilo.
He was arrested at the age of 15 for joining a political protest organization. While in prison, he joined the ‘Sandinista National Liberation Front’ (FSLN). 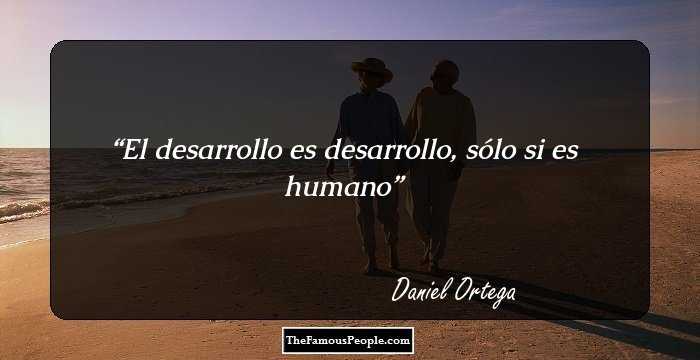 The Best Black Actresses Of All Time
Career
In 1967, Ortega was arrested and convicted of armed robbery after he participated in a heist at a branch of ‘Bank of America’. He was badly tortured by correctional officers while in prison.
In 1974, Ortega and other FSLN members were released from incarceration in a swap for hostages that his group held.
He was ordered to leave Nicaragua, however he secretly re-infiltrated the country shortly after being released from prison. In 1979, he married Rosario Murillo and moved to Costa Rica.
When the FSLN overthrew the government in July 1979, he became one member of a five-person junta.
In 1981,he assumed the leadership of the group, after several members resigned in protest of the FSLN’s dominance of the junta, becoming de-facto leader of the country. He began rapidly implementing government programs to combat illiteracy, poverty, sexism and racism.
American President Ronald Reagan accused the FSLN of fomenting Marxist revolutions in various countries in Latin America, including El Salvador,in 1981. The CIA soon began training an army of guerillas to overthrow Ortega's government. When the American public learned of the CIA's involvement, the scandal known as 'The Iran-Contra Affair' nearly toppled the Reagan administration.
In late 1984, presidential elections were held and he was swept to victory, garnering 67% of the popular vote.
In 1990, Ortega competed for re-election against Violeta Barrios de Chamorro, his former colleague from the ruling five-person junta. Surprising most observers, Chamorro soundly defeated him in the first round.
In 1996, he ran for president and was defeated by Arnoldo Aleman. He was met with the same fate, when he ran for president and was defeated by Enrique Bolanos, five years later. His defeat in both the terms is attributed to the corruption charges which surfaced in the later part of his presidential term.
Continue Reading Below
In 2006, he began maneuvering the FSLN to a hardline pro-Catholic ideology, supporting legislation to ban all abortions in the country. During the presidential elections, the same year, he was elected with just 38% of the popular vote.
In 2008, under Ortega's guidance, the FSLN pressured the national electoral council to disqualify several of their political rivals. Governments worldwide condemned these actions.
In 2011, he was re-elected as president, winning a landslide victory after garnering 62% of the popular vote.
In 2014, Ortega's government unveiled an ambitious plan to build an inter-ocean canal across the country.
Awards & Achievements
Daniel Ortega was the coordinator of the ruling junta of Nicaragua from July 18, 1979 to January 10, 1985.
Personal Life & Legacy
In 1998, Ortega's adopted stepdaughter ZoilaméricaNarváez made public a lengthy report,which detailed systematic sexual abuse accusations against Ortega that allegedly continued for over a decade. For technical reasons, Ortega could not be prosecuted in the case but Narváez continues to stand by her accusations.
He has been married to Rosario Murillo since 1979. His wife is recognized internationally for her evocative poems.
In 2005, he had to re-marry his wife in order for his marriage to be recognized by the Catholic Church. Together, the couple has eight children, although three are from his wife's earlier marriage.
Trivia
Daniel Ortega's official title is 'SeñorPresidente'.
This famous politician famously blamed the 2008 economic recession in America as God's punishment to the country, for a long history of interference in the affairs of Latin American countries
You May Like

See the events in life of Daniel Ortega in Chronological Order