Daniel Kahneman is an Israeli-American psychologist who is noted worldwide for his work in the field of psychology and economics. A Nobel Memorial award recipient, his work on cognitive biases, prospect theory and behavioural economics is eye-opening and extremely enriching. Educated in the field of psychology, Kahneman started his career as an academician at his alma mater, Hebrew University of Jerusalem. He soon took up important positions at various other institutions including University of California, British Columbia and Princeton University. Interestingly, trained as a research psychologist and despite having zero experience in economics, he went on to receive a Nobel Memorial Prize in economics due to his work on Prospect Theory. His contribution in psychology has been immense, given that it was through his work that a new field of research was founded that laid emphasis on integrated economic analysis with fundamental insights from cognitive psychology, in particular regarding behavior under uncertainty. Esther Duflo
DID WE MISS SOMEONE?
CLICK HERE AND TELL US
WE'LL MAKE SURE
THEY'RE HERE A.S.A.P
Quick Facts 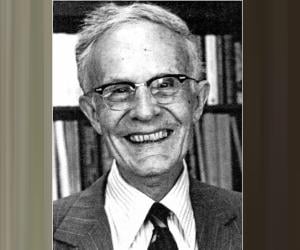 American People
Israeli People
Psychologists
American Men
Israeli Men
University Of California, Berkeley
Childhood & Early Life
Daniel Kahneman was born on March 5, 1934 in Tel Aviv when his mother was on a trip to her relatives’ place. His parents, originally from Lithuania, were settled in Paris, France where young Kahneman spent much of his early years.
In 1940, the Paris was occupied by the Nazi Germany and from then on difficult times started for the Kahneman family. His father was arrested but was later released due to the intervention of his employer. The family was constantly on run till the end of the Second World War and during this time Daniel’s father succumbed to diabetes in 1944.
In 1948, the family moved to British Mandatory Palestine, just before the creation of the state of Israel.
Completing his preliminary education, he enrolled at the Hebrew University of Jerusalem from where he graduated in 1954 with a Bachelor degree in Science, majoring in psychology with mathematics as a minor subject.
Attaining his graduate degree, he was drafted into the Israeli Defense Force, where he worked in the psychology department. His profile included evaluating candidates for the officer training program in school and developing test to gauge the candidates suitability for the purpose.
Gaining some work experience, he resumed his studies and went to United States in 1958, to pursue his PhD degree in Psychology from the University of California at Berkeley. He completed his PhD in 1961. 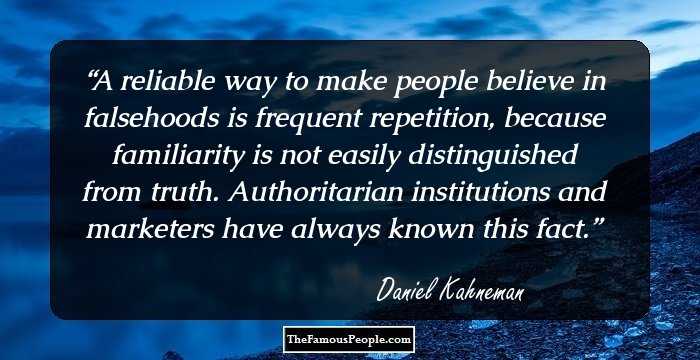 Quotes: Believe
Continue Reading Below
Career
Concluding his studies, he returned to his alma mater, Hebrew University of Jerusalem, where he took up an academic position as a lecturer of psychology in 1961. Within a span of five year, he was promoted to the rank of senior lecturer.
Other than pursuing his academic career, he continued with research and came up with his first work, which was published in the prestigious journal ‘Science’ as ‘Pupil Diameter and Load on Memory’. In it, he dealt with visual perception and attention.
Meanwhile, in addition to his academic position at Hebrew University, he also worked as a visiting scientist at the University of Michigan from 1965 to 1966 and at the department of Applied Psychology Research Unit in Cambridge. He served as the fellow at the Center for Cognitive Studies and as a lecturer in psychology at Harvard University in 1966/1967.
His association with Amos Tversky dates back to his time at Hebrew University of Jerusalem, during which he had invited the latter for a guest lecture. The two collaborated together and came up with their first jointly written paper ‘Belief in the Law of Small Numbers’ which was published in 1971.
Over the years, from 1971 to 1979, the duo came up with seven more articles in the field of judgement and decision-making, each of which was published in reputed journals.
For the academic year of 1977-78, the duo served as fellows at the Center for Advanced Study in the Behavioral Sciences at Stanford University. It was at Stanford that he first met Richard Thaler, a visiting professor at the university, and the two influenced each other greatly.
In 1978, Kahneman gave up on his academic position at the Hebrew University to take up a post at the University of British Columbia. Meanwhile, his exclusive tie-up with Tversky dwindled as he associated himself with other research analysts including his wife, Anne Treisman with whom he published two papers.
In 1979, they came up with their magnum opus work, ‘Prospect Theory’, which won them Nobel Memorial Prize in 2002. Their psychological research work included assimilating insights into economic science in the field of judgment and decision-making under uncertainty.
In addition to ‘Prospect Theory’, the duo came up with their work, ‘Judgement Under Uncertainty: Heuristics and Biases’ which was published in the esteemed journal, ‘Science’. The work held as much importance as the one on ‘Prospect Theory’ as it introduced the notion of anchoring.
Continue Reading Below
For eight years, from 1979 to 1986, Kahneman published a total of 23 works in multiple fields. During this period, he came up with a single chapter that focussed on hedonics. The work was essentially inspired by his earlier work on economic notion of utility.
In 1980, taking prospect theory and Kahneman and Tversky's body of work as basis, Thaler pusblished a paper "Toward a Positive Theory of Consumer Choice", which Kahneman has called "the founding text in behavioral economics".
From behavioural economics, he shifted his focus to hedonic psychology in the 1990s, a sector which was experiencing a boom at that time. The field was related to the positive psychology movement and was concerned with the study of feelings of pleasure and pain.
Following this, he came up with works on utility and the psychology of utility, by collaborating with other psychologists such as Thaler, Varey and Snell. In 1992, he joined forces with Varey to come up with a method that helped evaluate moments.
In 1998, he, together with David Schkade, developed the notion of focussing illusion. In this particular work, he highlighted the mistakes that people maKe while calculating or forecasting future happiness in various scenarios.
He believed that people often related their overall happiness to one particular factor rather than counting the numerous other factors that caused the same effect or sometimes even more. Through his work, he aimed at breaking this particular illusion, thus judging the overall effect of different situations over future happiness.
Currently, he is a senior scholar and faculty member emeritus at Princeton University's Department of Psychology and Woodrow Wilson School of Public and International Affairs. He is also a fellow at Hebrew University and a Gallup Senior Scientist 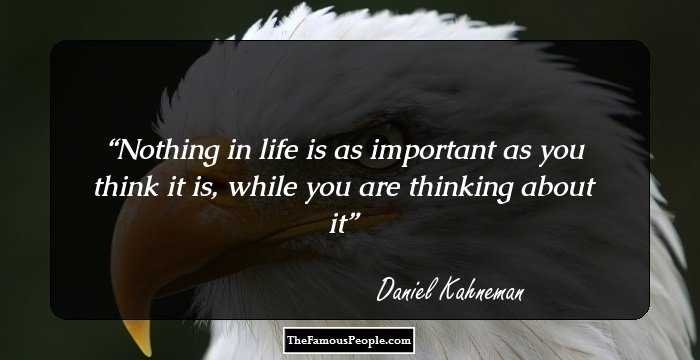 Quotes: You, Life, Think
Awards & Achievements
In 2002, he was conferred with the prestigious and highly-esteemed Nobel Memorial Prize in economics for his work on ‘Prospect Theory’. He shared this award with Amos Tversky.
Continue Reading Below
In 2003, he along with Tversky was awarded the University of Louisville Grawemeyer Award for Psychology.
The American Psychological Association bestowed upon him the Outstanding Lifetime Contributions to Psychology Award in 2007.
The Department of Economics at the Erasmus University in Rotterdam, Netherlands awarded him with an honorary doctorate on November 6, 2009.
For two years consecutively in 2011 and 2012, he was listed under Bloomberg 50 most influential people in global finance
In 2011, the American Academy of Arts and Sciences awarded him with the Talcott Parsons Prize. Same year, his book, ‘Thinking, Fast and Slow’ won the Times Book Award for Current Interest.
In 2012, for his book, ‘Thinking, Fast and Slow’, he was awarded the National Academy of Sciences Communication Award in the category of Best Book published in 2011. Same year, he was accepted as corresponding academician at the Real Academia Espa�ola (Economic and Financial Sciences).
In 2013, he received the highly-esteemed and prominent Presidential Medal of Freedom from US President Barack Obama.
Personal Life & Legacy
He tied the nuptial knot with Anne Treisman, who too serves as a professor of psychology at Princeton University. She is a Royal Society fellow and award-winning cognitive psychologist. 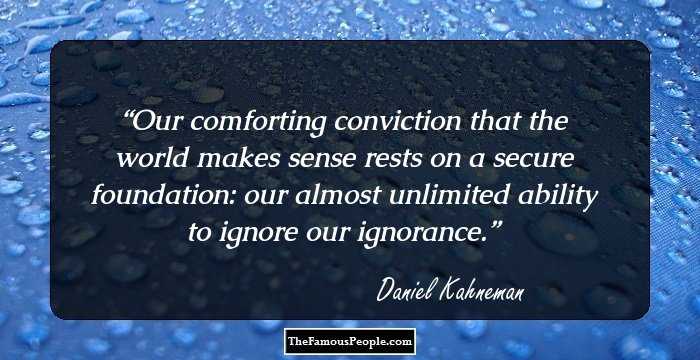 Quotes By Daniel Kahneman | Quote Of The Day | Top 100 Quotes

See the events in life of Daniel Kahneman in Chronological Order 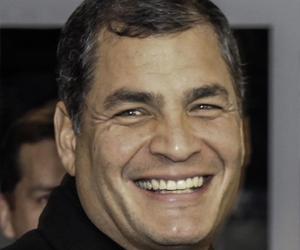