Carl Gustaf Mannerheim was a popular Finnish military leader and politician. He defended Finland against the Soviet forces during the Second World War and later served as the country’s president. He had also served as the cavalry commander of the Guards Cavalry Brigade in the Imperial Russian Army during World War I. He was awarded the Sword of St. George, one of the highest honors of Imperial Russia. He became the leader of Finnish government forces in the civil war of 1918, and then the commander-in-chief during the Second World War. He sought a close alliance with the west and was completely against German National Socialism and Soviet Communism. He was given the title of “Marshal of Finland,” becoming the only person to receive the title. A short political career followed his impressive stint as a military man. His tenure as the president of Finland, although short-lived, has been credited as one of his major achievements. Mannerheim remains one of the most important statesmen in Finland's history. His life has fascinated many generations of Finns. There have been over 300 books about him published in Finland and elsewhere. His residence in Helsinki has been a museum for over 60 years and is a popular tourist attraction to date. Cause of Death: Bowel Obstruction

Finnish Celebrities
Political Leaders
Finnish Men
Tall Celebrities
Tall Male Celebrities
Childhood & Early Life
Carl Gustaf Emil Mannerheim was born at the manor house of Louhisaari at Askainen, near Turku, on 4th June 1867. He was the son of Count Carl Robert Mannerheim and Héléne von Julin.
His mother passed away in 1881 and his father abandoned the family of seven children in pursuit of business opportunities abroad. Mannerheim was taken care of by his uncle, Albert von Julin.
Due to family problems, he struggled at school as well. He eventually entered the Cadet College at Hamina and was subsequently dismissed due to misconduct in 1886.
Continue Reading Below
You May Like

Who Is The Most Popular BTS Member?
Military Career
By 1891, he had entered the Chevalier Guards in St. Petersburg, Russia, and soon became a cavalry captain. Until 1904, he served in the Imperial Chevalier Guard. In October that year, he attained the rank of lieutenant-colonel and was transferred to the 52nd Nezhin Dragoon Regiment in Manchuria.
He was promoted to colonel after fighting in the battle of Mukden and the Russo-Japanese War. He traveled on horseback leading an expedition to China from July to October 1906, with French scientist Paul Pelliot.
Major Wars
During the beginning of World War I, he served as a cavalry commander at the Austro-Hungarian and Romanian fronts. In December 1914, he was awarded the Sword of St. George, one of the highest honors of Imperial Russia.
He fell sick after an accident and was taken off duty. He returned to Finland, arriving in December 1917. Around that time, Finland was involved in a merciless civil war between the Reds (socialists) and the Whites (bourgeois).
He was the leader of the White army, defeating the Reds. Germany was supporting the Whites, while Soviet Russia was supporting the Reds. By the 1930s, he decided to bridge the gap between the Reds and Whites and succeeded in gaining the trust of the Social Democrats.
Brief Presidency
In 1939, the Social Democrats agreed to his appointment as the commander-in-chief of the army. He later became the head of the state after being elected by the Parliament as the regent following former President Ryti's resignation.
After the armistice with the USSR, he became the president of Finland on 4 August 1944. Owing to his deteriorating health, he resigned as the president on 4 March 1946, with 11 March 1946 being his last day in office.
Family & Personal Life
Carl Gustaf Mannerheim married a wealthy Russian heiress named Anastasia Arapova (1872-1936) in 1892.They had two daughters, Anastasie Mannerheim (1893-1977) and Sophie Mannerheim (1895-1963). The couple separated and filed for a formal divorce in 1919.
Death & Legacy
In 1946, he had to undergo an operation for a perforated peptic ulcer. The following year, he traveled to the Valmont Sanatorium in Montreux, Switzerland, to write his memoirs.
He spent most of his final years at the Valmont, although he did often travel to Finland, Sweden, France and Italy. Since he was old and sick, he dictated most of his memoirs.
In January 1951, Mannerheim suffered a fatal bowel obstruction. On 27 January 1951, he passed away in the Cantonal Hospital in Lausanne, Switzerland. He was buried at the Hietaniemi Cemetery in Helsinki in a state funeral with full military honors on 4 February 1951.
On the 4th of June every year, the Finnish Defense Forces celebrate his birthday as their Flag Day. The government made this decision on his 75th birthday in 1942.
Recommended Lists:
Leaders #160
You May Like 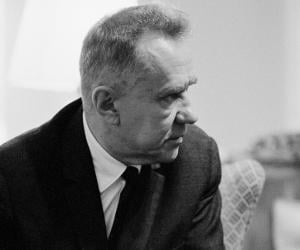