Advanced Search
Carl Ferdinand Cori was a Czech biochemist and pharmacologist who was a pioneer in demonstrating that biochemical research of isolated enzyme systems could aid in understanding physiological processes. He, along with wife Gerti Cori, was awarded the 1947 Nobel Prize in r Medicine for their study on the catalytic conversion of glycogen. Carl Ferdinand Cori received exposure in science from a young age owing to his father and grandfather’s occupation in the same field. Following this, he pursued studies in Medicine from the German University after which he spent two years in Austria while working at the University of Vienna and the University of Graz. In 1922, he, along with his wife, moved to the United States of America and began working at the State Institute for the Study of Malignant Diseases, New York. During this time they conducted an in-depth study of the carbohydrate metabolism along with defining the ‘Cori Cycle’. A few years later he joined the Washington University School of Medicine and while working here he was engaged in research connected to glycogenolysis. Post his retirement from the university, he had worked as visiting professor at Harvard University along with pursuing research at the Massachusetts General Hospital. He continued research until early 1980s when he was no longer able to work owing to ill health. Christian Anfinsen
DID WE MISS SOMEONE?
CLICK HERE AND TELL US
WE'LL MAKE SURE
THEY'RE HERE A.S.A.P
Quick Facts

American Celebrities
Czech Celebrities
American Men
Czech Men
Male Scientists
Czech Scientists
Childhood & Early Life
Carl Ferdinand Cori was born on 5 December 1896 at Prague. He was the son of zoologist Carl Isidor Cori who was the Director of the Marine Biological Station in Trieste and his wife Maria née Lippich.
As a child, he used to frequently visit his grandfather, Ferdinand Lippich, who was a Professor of Theoretical Physics in Prague. These visits gave him exposure to science from a very early age.
After completing his school education from the gymnasium in Trieste in 1914, he along with his family shifted to Prague. Here, he enrolled at the medical school of Charles University to pursue studies in Medicine.
During World War I, he was assigned duty as a lieutenant, in the sanitary corps of the Austrian Army along the Italian border. It was after he returned from service that he completed his studies and graduated as a Doctor of Medicine in 1920.
Continue Reading Below
Career
After completing his graduation he joined the University of Vienna and spent a year there followed by a year at the University of Graz as an assistant in pharmacology. At the University of Graz, he worked in collaboration with pharmacologist Otto Loewi to understand the influence of the vagus nerve on the heart.
In 1922, he accepted an offer to join the State Institute for the Study of Malignant Diseases, New York, as biochemist. Alongside working at the Institute, Carl Ferdinand Cori along with his wife, Gerty Cori, used to conduct research on topics of mutual interest i.e. preclinical sciences. This was a practice that began from their college days.
The duo focused on understanding carbohydrate metabolism detailing the biochemical processes involved in the production, disintegration and inter-conversion of carbohydrates in living organisms. This study led to the discovery of the Cori Cycle also known as the Lactic Acid Cycle in 1929.
In 1931, he joined the Washington University School of Medicine at Missouri as Professor of Pharmacology. He was later given the role of Professor of Biochemistry. While teaching at the Washington University Medical School, the husband wife duo continued their research on glycogen and explained glycogenolysis along with determining and synthesizing the enzyme glycogen phosphorylase.
In 1966, he retired from the Washington University as chair of the Department of Biochemistry. Later, he joined as visiting professor for Biochemistry at Harvard University. Simultaneously, he continued research in genetics at a reserved laboratory within the Massachusetts General Hospital.
Between 1968 and 1983, he worked at the Albert Einstein College of New York in association with acclaimed geneticist Salomé Glüecksohn-Waelsch. During the early years of 1980’s he had to refrain from work due to health issues.
Major Works
Carl Ferdinand Cori was a renowned biochemist who is best known for his study of carbohydrate metabolism and description of the Cori Cycle in collaboration with his wife Gerty Cori, who was also a biochemist. He also studied glycogenolysis as part of his research work.
Awards & Achievements
He was the recipient of the Albert Lasker Award for Basic Medical Research in 1946.
He was awarded the Sugar Research Foundation Award in 1947 and 1950.
Continue Reading Below
In 1947, Carl Ferdinand Cori along with Gerty Theresa Cori was awarded the Nobel Prize in Physiology or Medicine "for their discovery of the course of the catalytic conversion of glycogen".
He received the Willard Gibbs Award in 1948.
In 1950, he was inducted as a Foreign Member of the Royal Society of London. He was also member of the American Association for the Advancement of Science.
He received the Austrian Decoration for Science and Art, in 1950.
Personal Life & Legacy
Carl Ferdinand Cori met biochemist Gerty Theresa Cori (née Radnitz) during their college days. They married in 1920 and the couple had a son named Tom Cori. Gerty Cori suffered an illness of the bone marrow and died in 1957.
In 1960, Carl Ferdinand Cori married Anne Fitz- Gerald Jones.
He died due to health issues on 20 October 1984 At Cambridge, Massachusetts, at the age of 87.
Trivia
Carl Ferdinand Cori and Gerty Cori share a star on the St. Louis Walk of Fame.
The Endowed Professorship at Washington University is named after him as the ‘Carl Cori Endowed Professorship’. 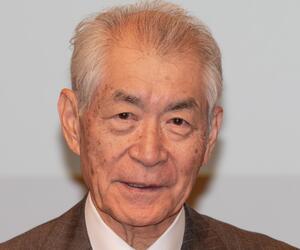