Benjamin McLane Spock was an American pediatrician, most noted as the author of one of the bestselling nonfiction books of all time ‘Baby and Child Care’. The eldest of six children, Spock was raised in the strict, authoritarian style which advocated such methods as forced weaning, initiation of toilet training in infancy, and no playing with infants. From an early age, he used to look after his siblings and developed a keen interest in the field of child rearing, especially psychoanalytic aspects of child development. He was heavily influenced by his training in developmental psychiatry and psychoanalysis which helped him in establishing a different philosophy of parenting that focused as much on family relations as on the raising of a child. His book ‘Baby and Child Care’ which advocated such things as love over coercion, more flexibility in the feeding and care of babies, and more diplomatic approaches to discipline, was an unprecedented success. He was also a leading political activist, a vocal opponent of the war, who raised his voice against the dangers of nuclear testing. But above all, he was a trusted doctor who taught people a new way to think about baby care and parenting. His work influenced how Americans brought up an entire generation of young people. Even today his books are still regarded as a popular source of information for bringing up children. American Celebrities
Non-Fiction Writers
American Men
Yale University
Columbia University
Childhood & Early Life
He was born on May 2, 1903, in New Haven, Connecticut, to Benjamin Ives Spock, a Yale graduate and long-time general counsel of the New Haven Railroad, and his wife, Mildred Louise Spock. He was the eldest of their six children and was often told to look after his young siblings.
He received his early education from the private preparatory schools and later went to Phillips Academy. From 1921 to 1925, he attended Yale University and majored in English literature. He was also a member of the rowing crew that represented the United States in the 1924 Olympic Games in Paris, France.
In 1925, he attended the medical school at Yale before getting transferred to ‘Columbia University's College of Physicians and Surgeons’ in 1927 from where he graduated in 1929. 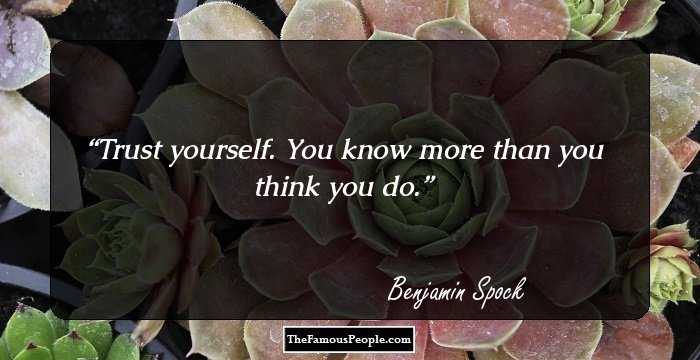 Quotes: You, Think, Yourself
Continue Reading Below
You May Like

The Sexiest Men Of 2020, Ranked
Career
Between 1933 and 1944, he practiced pediatric medicine. Alongside, he taught pediatrics at Cornell Medical College and worked as a consultant in the pediatric psychiatry for the New York City Health Department.
In 1943, while on a summer vacation, he started writing his most famous book ‘Baby and Child Care’.
From 1944 to 1946, while serving as a medical officer in the navy, he continued to work on it. The book was published in 1946 and became a worldwide success. Over the years, the book was translated in many languages and became one of the all-time best-sellers.
After he was discharged from the navy, he worked with the famous Mayo Clinic (1947–1951). From 1951 to 1955, he was appointed a professor of child development at the University of Pittsburgh and later became associated with the ‘Case Western Reserve’ from 1955 to 1967.
In 1962, he was also appointed the co-chairman of SANE, an organization dedicated to stopping nuclear bomb tests in the Earth's atmosphere. In 1967, he was to be nominated as Martin Luther King, Jr.'s vice-presidential running mate at the National Conference for New Politics over Labor Day weekend in Chicago.
In 1972, he contested the United States presidential elections on the People's Party (an independent political party) ticket. During the 1970s and 1980s, he gave lectures against nuclear weapons and cuts in social welfare programs.
He was also a leading political activist and an early opponent of the Vietnam War (1955-75). As the war escalated, so did the antiwar protest, in which he participated energetically. He marched and demonstrated with young people in support of this cause to save humanity.
In 1970, he published two more books ‘Decent and Indecent: Our Personal and Political Behavior’ and ‘A Teenager's Guide to Life and Love’. Some of his other non-fiction works include ‘Raising Children in a Difficult Time’ (1974), ‘Spock on Parenting’ (1988), and ‘A Better World for Our Children’ (1994). 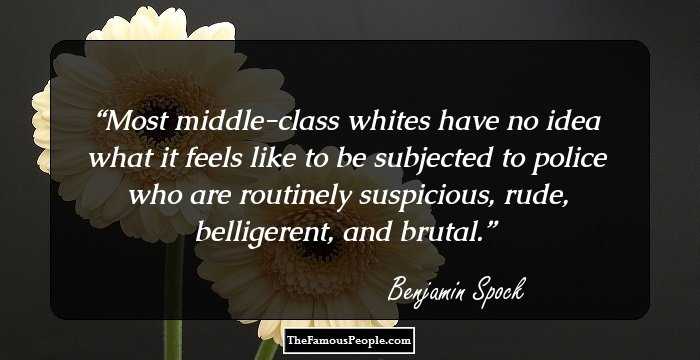 Quotes: Like
Major Works
He was most noted for his book ‘Baby and Child Care’, which significantly changed widely held attitudes toward the raising of infants and children. His ideas about childcare influenced several generations of parents to be more flexible and affectionate with their children, and to treat them as individuals.
Awards & Achievements
In 1924, he won an Olympic gold medal in rowing while attending Yale University.
In 1968, he was conferred the ‘Humanist of the Year’ by the ‘American Humanist Association’. 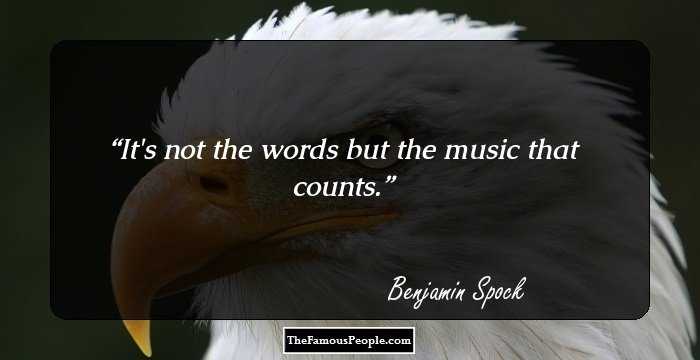 Quotes: Music
Personal Life & Legacy
In 1927, he married Jane Cheney, a civil liberties advocate. They were blessed with two sons, Michael and John. The couple got divorced in 1976, after 48 years of their marriage.
In 1976, he married Mary Morgan, who had formerly arranged speeches and workshops for him. She worked with him on his autobiography titled ‘Spock on Spock: A Memoir of Growing Up With the Century’ which was published in 1989.
He died on March 15, 1998, at his home in La Jolla, California. His ashes were buried in Rockport, Maine.
Recommended Lists:
Writers #1221
Physicians #29
Activists #413
You May Like

See the events in life of Benjamin Spock in Chronological Order